It looks like Robert Altman is finally having his revenge on Hollywood. The maverick director, whose movies include such irreverent classics as M*A*S*H* (1970) and Nashville (1975), has not worked with a major studio since butting heads with Paramount executives over the making of Popeye in 1980. Now, he is suddenly the talk of the town. With his new movie, a star-studded comic thriller called The Player, the 67-yearold film-maker has crafted an eviscerating satire of deceit in the world’s movie capital. And the same kinds of Hollywood executives who are skewered in The Player seem to love the abuse: smelling a hit, several major studios bid for the right to distribute the film. “They’re shameless, aren’t they?” a chuckling Altman told Maclean ’s last week.

The Player does to Hollywood what Tom Wolfe’s novel The Bonfire of the Vanities (1987) did to Wall Street. It, too, is about a “master of the universe,” in this case a movie executive who murders a screenwriter, then scrambles to cover up his crime. While making a clever mockery of Hollywood formula, it also contains the essential ingredients of that formula as prescribed by the executive: “Sus-

pense, laughter, violence, hope, heart, nudity, sex and happy endings.” But each ingredient is deliciously tainted with irony. Adapted by coproducer Michael Tolkin from his 1988 novel, The Player is one of the most ingenious and enjoyable movie comedies in ages. Superbly crafted, it shows Altman once again at the peak of his form—combining a sublime talent for improvisational drama with a ruthless satirical instinct.

While Hollywood insiders can scour The Player for in-jokes, outsiders can revel in a feast of celebrity voyeurism. To create an authentic background for his fictional story, Altman attracted what must be a record number of cameos for a single movie. His cast of “extras” includes dozens of stars playing themselves. To name a few: Julia Roberts, Nick Nolte, Anjelica Huston, Susan Sarandon, Bruce Willis, Lily Tomlin, Burt Reynolds, Mimi Rogers, Jack Lemmon, Teri Garr, Jeff Goldblum, Rod Steiger, Harry Belafonte and Cher.

Altman says that he had no trouble getting so many stars to donate a day of their time. “I just asked them,” he recalled. “They responded as if they were signing a petition of protest. It was almost political what they did. Nobody asked to read the script first. I gave them the 25-words-or-less pitch over the phone.”

The ritual of pitching scripts is the most

frequent target of satire in The Player. The movie opens with an uninterrupted eight-minute tracking shot in which the unblinking camera prowls around a studio parking lot, peering through windows and doorways of various executive offices where writers are pitching scripts. In one office, Buck Henry, who cowrote The Graduate, is peddling The Graduate Part II, “a dark, weird, funny” sequel, he explains, with Mrs. Robinson as a paralysed stroke victim and Julia Roberts playing the new graduate. Another writer proposes a “cynical, political thriller-comedy with a heart—not unlike Ghost meets The Manchurian Candidate.”

As the camera continues its marathon take, it catches a conversation about great tracking shots in movie history, even as they are being overtaken by Altman’s own parody of directorial virtuosity. “I was trying to show the pretence of that sort of thing,” said Altman. “If I don’t satirize myself, I don’t dare satirize anybody else. I was also trying to let the audience know that this would be a movie about movies, and maybe about bad movies.”

The story revolves around Griffin Mill (Tim Robbins), a slick studio executive who has been receiving anonymous, threatening postcards.

Unnerved, he finally traces the threats to an embittered young writer whose script he once rejected. Mill tries to buy him off, and then murders him, almost inadvertently. As he desperately tries to cover up the crime, a police detective played with wicked relish by Whoopi Goldberg investigates. The chief of studio security (Fred Ward) tries to minimize scandal. And Mill, adding intercourse to injury, begins an affair with the murder victim’s girlfriend, an Icelandic artist played as a seductive ice queen by Greta Scacchi.

Meanwhile, back at the studio, Mill has to fend off an executive power play by an oily upstart named Larry Levy (Peter Gallagher). Arid two obsequious film-makers, played by Dean Stockwell and Richard E. Grant, try to pitch Mill a bleak project called Habeas Corpus, a movie with no stars and a heroine on death row who is executed just moments before the hero arrives with proof that she is innocent.

The Player itself is a movie within a movie, a Hollywood hall of mirrors echoing with the wry cackle of Robert Altman. But while the various subplots merge into an elaborate conceit, Alt-

man maintains an atmosphere of documentary realism. He asked the 65 Hollywood personalities who appear as themselves in the movie to make up their own lines. “I said, ‘Listen, you’re extras,’ ” he recalled, “ ‘and I can’t tell you how to behave because you’re playing yourselves. I don’t really care what you do.’ And they all behaved the way I guess they think they behave.”

Altman mustered his biggest contingent of stars for a mock black-tie benefit at the Los Angeles County Museum of Art. “Everybody who is anybody is right here,” gushes Leeza Gibbons of TV’s Entertainment Tonight, noting that Cher, dressed in a redsequined gown, has defied the black-and-white dress code requested on the invitation (and by Altman). Delivering the evening’s keynote speech, Mill declares, with consummate hypocrisy: “Movies are art—now more than ever.”

Altman, who wrote the speech himself, displays an undisguised contempt for Hollywood. “It is in the business of copying things that have previously sold,” he said. “And the minute the ink starts getting too faint to read, they have to look around for something else to copy. Then they have to turn to § an artist.”

i Since his heyday in the I 1970s, Altman says, Hol1 lywood has become “very à dry. Nobody’s enthusiasz tic about anything but g making money. I don’t 2 think anybody’s in charge. The room at the top is empty. Do you know who

runs Sony [owner of Columbia-TriStar Pictures]? I don’t know if anybody does. But I guarantee you there’s nobody there that has an interest in making good films.”

Altman, however, continues to make good movies outside the studio system. In 1990, he won critical acclaim for Vincent and Theo, a vibrant portrait of the van Gogh brothers. With The Player, independently financed for $10 million, he may have his first hit in years. “I think we have touched a nerve here,” he said. “There’s a revolt against greed and admiration of people who just succeed.” And now, as he tries to launch his next project (“If I can talk like one of the pitches in The Player, it’s like Nashville meets Thieves like Us,” he explains), the executives are more eager to listen. Once again, Robert Altman has become a player, but strictly on his own terms. 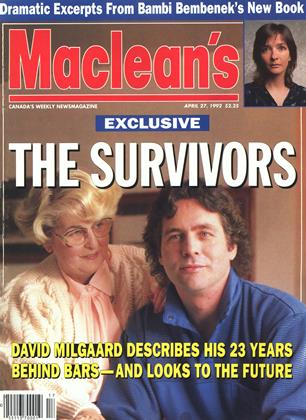