It was an option that the secretive Reichmann brothers rarely entertained, even as a last resort. For more than three decades, Paul, Albert and Ralph Reichmann operated their Toronto-based business empire as a private family affair, owned entirely by themselves and their wives. But last week, the three brothers summoned representatives of 15 banks to the main tower of their Canary Wharf project in London’s Docklands and made what amounted to their boldest bid yet to stave off possible financial collapse. In return for a five-year freeze on repaying their $ 14.3-billion debt, the Reichmanns offered the banks a share of their troubled holding company, Olympia & York Developments Ltd. O&Y’s new president, Gerald Greenwald, called it a milestone in the company’s history. “After decades of total private family ownership,” he said, “the company is inviting its lenders to join hands as partners in the business.”

But what Greenwald described as an invitation could well be O&Y’s last chance to stave off bankruptcy. All week, the company’s financial crisis deepened. Earlier, the federal and Ontario governments officially refused to offer any bailout. Then, the company defaulted on a $17-

million interest payment on one of its bond issues—an omission that could result in creditors seizing its landmark First Canadian Place office tower in downtown Toronto as early as this week. Finally, O&Y announced that it will take a $250-million loss when it completes the sale of its 18-per-cent stake in railway and real estate conglomerate Santa Fe Pacific Corp. of Chicago in an effort to raise cash to service its debts. At week’s end, the $7-billion Canary Wharf project, the jewel in O&Y’s crown, was being kept alive only by intermittent cash

advances from the banks—which loaned the project $44 million to keep going for another three weeks. At the same time, initial reaction from the financial community suggested that the 15 banks that are considering O&Y’s latest restructuring proposal were likely to demand substantial additional concessions during discussions, which company officials said would likely drag on for several weeks.

Meanwhile, the Reichmanns’ continuing struggle led Canadian analysts to focus new attention on some of the country’s other prominent family fortunes. Speaking to Maclean’s last week, several business experts drew parallels between the highly personal management style that may have contributed to O&Y’s present difficulties and the autocratic direction of some other closely held Canadian business empires (page 42). At the same time, even as more than a dozen British financial institutions considered the merits of accepting part ownership of O&Y in place of loan repayments, Canadian institutional investors debated their role in the management of a growing number of other corporations that have also sought infusions of fresh cash (page 46).

If the banks eventually accept it, however,

O&Y’S proposal would be the world’s biggestever corporate restructuring plan. And even the manner of its delivery to the banks underlined how much the company’s financial problems had already forced the Reichmanns to relinquish personal control of their jealously guarded private fiefdom. Appropriately, it was unveiled in the heart of the 800-foot Canary Wharf tower—a symbol both of the Reichmanns’ far-reaching vision of building a new business district in the once-derelict docklands of London’s East End, and of their massive miscalculation of the world real estate market. More than anything else, the worldwide recession and the collapse of real estate prices just as the project was reaching completion touched off O&Y’s current crisis.

Under O&Y’s complex plan, the company would not repay the principal on most of the $14.3 billion it owes to its creditors for five years. It would also suspend interest payments on about $5 billion of that debt. At the same time, Miller and Greenwald asked the banks for another $630 million to complete the first phase of Canary Wharf, allowing several tenants to occupy space in the project as scheduled later this year. In return, the banks would receive up to 20 per cent of O&Y, and as much as 30 per cent of Canary Wharf itself, in the form of nonvoting common shares. According to Greenwald, that arrangement was the best way both to ensure O&Y’s survival and to force the banks to consider the company’s long-term prospects rather than focusing on its immediate crisis.

“Neither the company nor the lenders can win without the other,” he said.

To provide “comfort” for its creditors during the restructuring process, O&Y deposited shares in its two principal holding companies with a custodian. A bank will hold 54.5 million shares of O&Y’s Forest Products Holdings and 113.8 million shares of Energy Holdings on behalf of creditors who are owed $3

billion. According to a filing with the U.S. Securities and Exchange Commission in Washington, the shares—tied to O&Y’S 82-per-cent stake in Abitibi-Price Inc. of Toronto and its 74-per-cent interest in Gulf Canada Resources Ltd. of Calgary—may only be traded or transferred on five business days’ notice.

However, there were clear signs that the Reichmanns remained uncomfortable about relinquishing even partial ownership of the com-

pany that they built into the world’s biggest real estate developer over the past 35 years. Under their plan, O&Y would have the right to buy back the shares it issued to the banks within seven years at an agreed-on price. The Reichmanns were betting that the end of the recession and an upturn in property values will return O&Y to profitability well before then— and allow them to regain control of their empire. Said Greenwald: “We are absolutely confident that over a time frame of five years, the business cycle will recover.”

In fact, the Reichmanns’ reluctance to consider diminished control of O&Y may be a deal breaker. Several bankers expressed skepticism about a plan that allows the Reichmanns to continue running O&Y without even offering creditors a seat on its board of directors. Declared one exasperated creditor, who asked to remain anonymous: “It’s a complete joke. Even now, they don’t seem to understand that there just isn’t a lot of confidence in their ability to manage this mess.” Although banks usually co-operate when financially strapped companies seek to convert debt into equity, he added, the Reichmanns are offering nonvoting shares in a private company for which no values or liquidity have been established.

In fact, O&Y’s proposal contains plans to raise new cash by selling off more of its nonreal-estate holdings. That process continued last week when the company announced that it had sold its stake in Santé Fe Pacific Corp., a railway and mining company, for about $500 million—after paying $750 million for it in 1988. A day later, O&Y confirmed that it also plans to sell its share of Home 8 Oil Ltd. of Calgary, worth g about $600 million at current z prices.

I Canadian bondholders who

faces the strong possibility that they may move as early

ty that backs the bonds: the 72-storey First Canadian Place. The soaring white marble tower in Toronto established the Reichmanns’ reputation as visionary builders. But like Canary Wharf, it may come instead to symbolize the humbling of one of the most ambitious commercial empires of the age.

ANDREW PHILLIPS in London with DEIRDRE McMURDY in Toronto 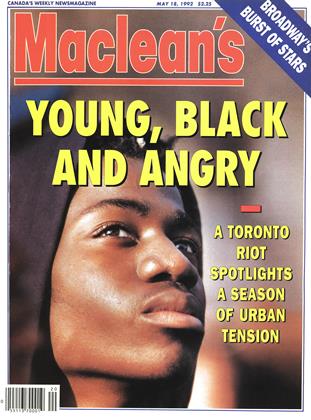