For anyone travelling into Toronto, the gleaming white spire of First Canadian Place, the tallest office building in the Commonwealth, is an unmistakable symbol of the city’s financial district. In the same way, no air traveller approaching London’s airport over the River Thames can fail to spot the soaring marble profile of Canary Wharf. And no one gazing at Manhattan’s fabled skyline is likely to miss the three bronzed towers of the World Financial Center, each topped with a distinctive geometric roof. Those striking buildings are more than mere monuments to their makers, the brothers Albert, Paul and Ralph Reichmann. With an audacity that expanded with each new project they undertook, the Toronto-based developers redefined the face of some of the world’s most important cities. That made it all the more humbling last week when an executive representing 29 of the Reichmanns’ Canadian companies, including their flagship, Olympia & York Developments Ltd., conceded that the firms “are insolvent.” With that admission, the Reichmanns took a step that had been expected for weeks and sought protection from the courts against their creditors. “This is not bankruptcy,” O&Y’s president, Gerald Greenwald, bravely told reporters the day after that company and its Canadian affiliates applied for protection under the Companies’ Creditors Arrangement Act. In fact, he added, “With the co-operation of our lenders, we are confident that Olympia & York will emerge as a stronger enterprise to resume its leadership among global property developers.” But that outcome remained in doubt: more than half the Reichmanns’ empire contin-

O&Y denies it is in trouble; insists that it is “current on all its obligations.”

O&Y confirms it must restructure as much as $23 billion in debts.

O&Y fails to repay a $450-million loan and fails to make a scheduled $83-million contribution towards extending London subway service to Canary Wharf.

After meeting with Paul Reichmann, Ontario Premier Bob Rae rules out a provincial bailout for O&Y.

Finance Minister Don Mazankowski says Ottawa will not guarantee a loan for the sale of O&Y’s Exchange Tower, home of the Toronto Stock Exchange.

O&Y offers London-based creditors a 20-per-cent nonvoting share in the familyheld company, as well as 30 per cent of Canary Wharf, in return for $700 million in new loans and a five-year holiday from repayments on an estimated $14 billion in existing loans.

A British court declares that O&Y owes Morgan Stanley $231 million for the buyback of an office tower at Canary Wharf.

In Toronto, O&Y files for protection for its Canadian assets from creditors under the Companies’ Creditors Arrangement Act.

In New York City, O&Y files for protection from its creditors under Chapter 11 of the Bankruptcy Act.

lied to operate outside the protection of the courts, and creditors in New York City and London could act as early as this week to seize other holdings.

In Canada, the company took its action just hours before lenders could seize its 72-storey First Canadian Place tower. After a dramatic evening court appearance, Ontario General Court Judge Robert Blair awarded O&Y the protection it sought for its core Canadian assets. Blair gave O&Y a five-month deadline to work out a new schedule for the repayment of more than $14.9 billion in debts that it owes to 91 creditors. But until Oct. 21, those creditors will not be able to seize any of O&Y’s assets in settlement of its unpaid bills.

were left to look for wider lessons in the carefully modulated reassurances emanating from O&Y’s spokesmen. Chief among those, clearly, was a renewed appreciation for the economic law of supply and demand. Just as the Reichmanns rode the crest of the greatest urban building boom in history during the 1980s, they could not escape the consequences when the rush to build new office towers and commercial centres overshot the ability of the marketplace to absorb them. When the overhang of too many buildings—and too few tenants—forced down both rental incomes and property values, the Reichmanns found themselves with dozens of buildings that were mortgaged for more than they were worth.

Dilemma: Their dilemma was compounded by the fact that nearly all of their ambitious developments were financed with borrowed money (page 32). By last week, the Toronto developers were struggling to avoid the most spectacular bankruptcy in history. Noted economist David Jones at Aubrey G. Lanston & Co. Inc. in New York: “In commercial real estate, the Donald Trumps were the first to go. The bigger and more respected developers like Olympia & York went last.” Beyond that, the Reichmanns’ action had only muted effects on the national economy. Traders on the Toronto Stock Exchange defied expectations and responded to reports of O&Y’s filing late on May 14 by driving up the price of most stocks, including those of several banks that have lent money to O&Y, in early trading the following morning. The Toronto exchange’s index of 300 leading stocks actually ended the week slightly higher than it had been just before the Reichmanns’ manoeuvre. The Canadian dollar also gained on international markets.

Still, doubts continue to surround the Reichmanns’ ability to restructure their massive debt in a way that will allow them to repay it from their recession-depleted income. Already, Citibank, one of its largest creditors, has written off $119 million in loans to O&Y and classified the remaining $330 million as nonperforming. The court documents that O&Y

filed spell out what the company described as “a preliminary plan of compromise”—essentially the blueprint of the financial settlement that O&Y and its affiliates have offered their lenders. The plan would postpone principal repayments on O&Y’s debt until at least 1997. Until then, O&Y would pay interest on its debt in the form of company shares, turning over up to 20 per cent of its non voting stock to creditors.

That proposal mirrors closely one that the company’s British-based lenders responded coolly to earlier this month, when O&Y attempted to secure new financing for its partially finished $7-billion Canary Wharf development (page 28). For one thing, the lenders noted, the offer of nonvoting stock allows no opportunity to influence O&Y’s management decisions. For another, O&Y stock is not publicly traded, making it difficult to value and impossible to sell for cash.

Meanwhile, the Reichmanns may be forced as early as this week to seek court protection for the remaining British and American legs of their corporate empire. In the United States, the company has called a meeting of bondholders for Tuesday. But if the undertakings that O&Y offers fail to satisfy the lenders, they could act to seize Reichmann properties in New York. That action would almost certainly prompt the company to seek Chapter 11 protection under U.S. bankruptcy law (page 29).

Trouble: The family could soon be in deeper trouble in Britain, as well. For one thing, the Reichmanns have until May 21 to pay $290 million to Morgan Stanley and Co., which last week won a court ruling involving a dispute over a building that the investment house built and occupies at Canary Wharf.

While O&Y could appeal that ruling, other problems remain. “Canary Wharf,” the company acknowledged in its court application, “is not generating sufficient revenues to meet its operating expenses, debt-service requirements and construction costs.”

However, the Reichmanns received some encouraging reports last week, with confirmation that the British government may rent 500,000 square feet of offices in Canary Wharf. But the approximately $25 million that the lease would generate in annual rents is only a small fraction of O&Y’s immediate cash requirements.

At best, the Reichmann brothers now face months, and perhaps years, of restrictive court supervision. Under the terms of last week’s Ontario court order, O&Y and its affiliates will have to report for the next five months to a court-appointed “information officer”—accountant Bernard Wilson, a senior partner of the Toronto accounting firm Price Waterhouse. It is also likely that the family’s Canadian creditors will insist on it selling off more of its assets, in addition to those in U.S. railway conglomerate Santa Fe Pacific Corp. and Canadian oil company Home Oil Co. Ltd. that the

brothers have already put on the block.

But if both Canadian and British sets of creditors accept the Reichmanns’ most recent restructuring proposals, the settlement would leave at least 60 per cent of O&Y’s nonvoting, and all of its voting, stock in family hands. While less than the 100-per-cent ownership that the Reichmanns have enjoyed since the development company was founded in 1965, that shareholding would still leave the brothers firmly in control of O&Y. And whatever the

outcome, no settlement is likely to leave the brothers, Albert, 62, Paul, 61, and Ralph, 57, or their families destitute. The full extent of their personal wealth, estimated by Fortune magazine last year at $14.7 billion, remains a secret. But the brothers’ Orthodox Jewish family has a history of salting away savings for a rainy day: during the Second World War, their father succeeded in spiriting his wife and children out of Europe ahead of the Nazis and setting up a business in neutral Morocco, largely on the strength of money that he had presciently deposited in British banks.

Charities: Others may be more affected by the Reichmanns’ straitened circumstances. O&Y has already laid off about 35 of its 2,100 employees and other dismissals may follow if the company fails to convince its creditors to accept its restructuring plans. And charities that have relied on the Reichmanns as generous, if low-profile, donors to such causes as Toronto’s Hospital for Sick Children and New York’s Metropolitan Opera may have to reduce their expectations.

Banks and other real estate companies lead the list of businesses that stand to lose from the Reichmanns’ financial difficulties. Canadian

banks are believed to have loaned O&Y and its affiliates about $3 billion, and analysts predicted that the banks were likely to restrict credit to other borrowers as they attempt to absorb any write-downs of loans to O&Y in the months ahead.

The outlook for companies with large commercial real estate holdings is even chillier— less because of O&Y’s reversals than as a result of the same conditions that brought the Reichmanns to the verge of bankruptcy. “The prob-

lem is not Olympia & York,” noted Michael McCracken, president of Informetrica Ltd., an Ottawa economic forecasting company. “The problem is that real estate assets in the world are worth 25 or 50 per cent less than what they were judged to be a couple of years ago.” Among the companies whose balance sheets are likely to be bruised as they take account of the fall in real estate values is Bramalea Ltd.— one of the units of Toronto’s Bronfman empire, which has already been battered in recent weeks (page 30).

Other Canadians, however, are unlikely to feel much immediate impact from the latest upheavals at O&Y. For most residents of the cities where the Reichmanns have placed their stamp, their legacy will be enduring contributions to the urban landscape. That the visionary men who transformed a stretch of former landfill into Manhattan’s World Financial Center and the run-down docklands of east London into Canary Wharf may not in the end manage to preserve their ownership of the buildings is, like most of the Reichmanns’ life, a private family affair. 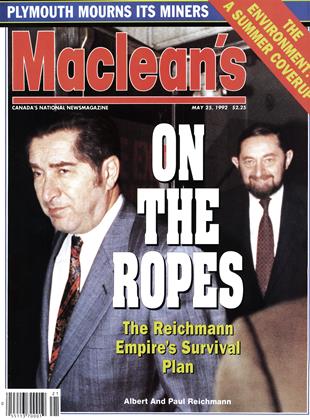