War raged on in the Balkans last week. And in Rio de Janeiro, nothing less than the fate of the planet was being hotly debated. But for millions of Britons, and for millions more in other countries, one story seemed to matter above all: the saga of a 30-year-old mother of two and her middleaged husband. Once again, the troubled marriage of Diana, Princess of Wales, and Charles, her prince, was under the microscope. And this time, the findings were truly sensational. Three new books paint the royal couple’s relationship in the bleakest terms ever. One of them, Diana-. Her True Story, by Andrew Morton, alleges that the princess was in such despair over her marriage that she tried to kill herself five times in the early to mid-1980s. And perhaps most damaging to her relationship with her husband is that Diana apparently gave her tacit approval to Morton’s book, breaking the code of silence that normally surrounds the Royal Family’s private lives.

Officially, Buckingham Palace offered only its usual disdainful “no comment” to the web of rumors and allegations. But even if only part of what the new books allege is true, it confirms what had long been suspected by those who have followed the royal couple’s rocky progress since they were united almost 11 years ago in St. Paul’s Cathedral: their marriage is an empty shell maintained only for the sake of appearances. Indeed, the recent books portray Charles and Diana as locked in a domestic cold war so bitter that the once unthinkable prospect of a

formal separation or even divorce was being discussed by some royal-observers. That would be a disaster for the Royal Family, already embarrassed by the antics of its other younger members and the target of increasing public criticism over its cost to taxpayers. For the Queen herself, it represents possibly the biggest crisis of her 40-year reign (page 28).

In part, Charles and Diana find themselves caught in the crossfire of a high-stakes war between rival publishers and newspapers. It began in April when a London socialite named Lady Colin Campbell published Diana in Private-. The Princess Nobody Knows. That book set the tone for the others by maintaining that Diana long ago realized that her marriage was a “loveless sham.” A second book, Diana-. A Princess and Her Troubled Marriage by journalist Nicholas Davies, extracts from which the London tabloid Daily Mail published last week, alleges that the princess once took an overdose of acetaminophen tablets, a common painkiller. Palace insiders were quoted as saying that the act was an “agonized cry for help.” After taking the pills, Diana telephoned Charles, who sent a doctor to her side.

Illness: Davies’s book also says that Diana suffered from the eating disorder bulimia in the mid-1980s. The princess apparently binged on food late at night before making herself vomit, a.destructive cycle that led friends to persuade her to be treated in 1988 by a London psychiatrist. One of the signs of her illness, Davies reports, came in May, 1986, when Diana fainted in public during a visit to Expo 86 in Vancouver. And the book also points to Charles’s continuing close friendship with 43year-old Lady Camilla Parker-Bowles, whom he dated in the early 1970s, as a source of tension between the royal couple.

But the book that turned the simmering controversy over Charles and Diana’s unhappy union into a frenzy of speculation is Morton’s 158-page biography, to be published on June 16. What made it potentially most damaging to the Royal Family is that Diana herself apparently allowed her family and friends to co-operate with Morton, a 38-year-old former tabloid reporter. The princess’s father, Earl Spencer,

who died in March, sold dozens of her childhood photographs to Morton’s publisher, and the author’s sources reportedly included Diana’s brother and several of her closest friends. Andrew Neil, editor of The Sunday Times, which paid about $545,000 to serialize the book, described it as Diana’s version of her marriage. “This book was produced because a lot of Diana’s friends felt it was time that the real story should be told,” said Neil. “And they did so in the knowledge that Diana wanted it to be told.” Neil also said that Diana does not believe that she is going to be queen, and “it may be as a result of these revelations that there will be a question mark over Charles being king.”

Morton’s book details several attempts at suicide by Diana, all said to be aimed at expressing her unhappiness rather than serious bids to take her life. In the mid-1980s, the princess apparently threw herself down a staircase at Sandringham in Norfolk, one of the Queen’s private residences, after a heated argument with Charles. Morton reports that it was the Queen Mother who discovered the princess unconscious at the bottom of the stairs. And on other occasions, he writes, Diana slashed at her wrists with a razor blade, and cut her chest and thighs with a knife.

Since then, most royal-watchers maintain, the princess has overcome her illnesses and has come to terms with her life. Indeed, most observers still say that the couple will never formally separate, let alone divorce. Charles’s position as heir to the throne is too sensitive, and both he and his wife have a strong sense of duty to the monarchy despite their deep differences. Even as the latest revelations flooded the British press, Charles and Diana appeared together at the annual sports day on Saturday at the boarding school attended by their elder son, nine-year-old Prince William. They arrived, and left, in separate luxury sports cars.

An opinion poll published last weekend indicated that most Britons believe the couple should stay together, both for the sake of the monarchy and for their children, William and Harry, 7. The same survey found that if Diana’s aim in condoning Morton’s book was to win public sympathy, she succeeded: 34 per cent blamed Charles for the marital crisis while only six per cent pointed the finger at Diana.

If it ever came, however, a divorce would be a public-relations disaster for the House of Windsor. In strict legal terms, nothing would prevent Charles from divorcing, or inheriting the throne after a divorce. But an open breakdown in his marriage would deal a possibly fatal blow to the prestige of the Royal Family, especially after the formal separation of the Duke and Duchess of York in March and Princess Anne’s divorce in April. For more than a century, the Royal Family has depended heavily on a succession of strong women: Queen Victoria, the Queen Mother and Queen Elizabeth herself. Its dilemma is that, despite Diana’s past unhappiness and present defiance, the monarchy still needs her to carry on that tradition. 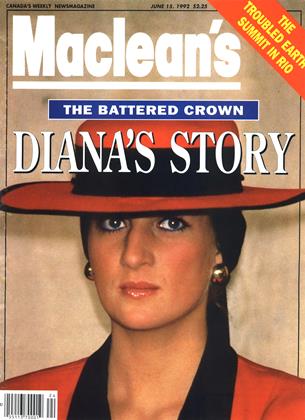