As the constitutional circus heats up again, the prospect of a national referendum looms almost certain for this fall. It could become the civil war we never had, an intensely fought confrontation between opposing views of Canada’s destiny, bitterly debated across the country, with a winner-take-all climax on voting day.

The experience promises to be unnerving and markedly un-Canadian. As a people, we have always shied away from traumatic public confrontations, resorting to compromise and bungling through. This would be radically different, requiring each of us personally to get off the fence and cast a vote for or against specific and contrary visions of our future. That future would be decided as votes are tallied in one dramatic night.

Brian Mulroney, sponsor of the referendum legislation, keeps pointing out that such a plebiscite would only be “advisory in nature” because the country’s Constitution cannot legally be amended by the results of a referendum. But once the people have spoken, they can’t be ignored. The politicians may not be legally bound to follow the results of the referendum, but to legislate in any contrary way would amount to political suicide. Canada will, literally, become a different country the day of the referendum vote.

Referendums are a rare phenomenon in our history, not easily fitted into Canada’s parliamentary traditions. Only twice before, in 1898 over Prohibition and in 1942 over conscription, have Canadians voted in national plebiscites. Neither proved earthshaking because the issues on which they were held were too specific and the results were appropriately smudged. This one will be different.

Whether we actually have a referendum this fall will depend on the success or failure of the current talks, but to maximize its political impact, such a vote would have to be held before Quebec’s own referendum, due on Oct. 26. Since it takes a minimum of three months to prepare for a federal referendum, because of

the lengthy enumeration process, the decision to hold it will have to come by the end of July. The campaign itself would last 36 days, about half as long as a general election.

That timetable is complicated by Quebec’s own referendum requirements. Under the province’s legislation, the actual referendum question must be debated by the National Assembly for a maximum of 35 hours, which, if the 1980 referendum example is followed, translates into about three weeks of sitting time. The referendum writ cannot be issued less than 20 days after the resolution is adopted. That’s followed by the actual campaign, lasting from 47 to 54 days. Assuming the longer period, the campaign would have to start on Sept. 2, and the National Assembly would have to approve the question by Aug. 13, which in turn would require the referendum resolution to be tabled in the Quebec house by July 27—about the same time Ottawa needs to make its own referendum decision.

That drum-tight schedule doesn’t end there. British Columbia also has active referendum legislation on its books and any constitutional deal will have to be approved by a plebiscite there. A 50-per-cent approval vote would be binding on Michael Harcourt’s government

even if, as appears likely, the results are not to the premier’s liking. Alberta has similar legislation in the process of being adopted, with the most likely scenario that a referendum will be held simultaneously with provincewide municipal elections on Oct. 19. Prince Edward Island, Newfoundland, Saskatchewan and the Yukon and Northwest territories also have referendum legislation in place, but are less committed to holding votes. Constitutional amendments in Manitoba require a 10-day debate in the legislative assembly (where Elijah Harper torpedoed the Meech Lake accord last time around and could do so again) as well as open-ended public hearings.

Historically, referendums have not been widely used by democratic governments around the world, but when they are, the results have not been exactly what the sponsoring governments expected. The voters often used the occasion to reject the record of the incumbent regime instead of concentrating on the question asked. Plebiscites have mostly been used to address extraordinary political or constitutional issues, ratifying new constitutions or forms of government, such as in France (1946 and 1962). They have also been useful to legitimize the separation of states, including the 1979 vote on the split between Greenland and Denmark. Denmark earlier this month decided by a slim referendum margin to stay out of Europe’s political and monetary union.

Four European countries held referendums on their original membership in the European Common Market during the early 1970s. (Interestingly, in the United Kingdom, Harold Wilson’s cabinet split on the issue, with 16 ministers campaigning for the EEC and seven against.) Only four democracies, the United States, Germany, Israel and the Netherlands, have never held plebiscites. In Australia, constitutional amendments must be ratified by a double majority—a national vote and at least four of its six states—but since 1900, only eight of 42 suggested changes have been approved. The most referendum-happy democracy is Switzerland, where more than 350 plebiscites have been held this century. Federal legislation is subject to ratification by a referendum if only 50,000 citizens, or less than one per cent of the population, request one.

In Canada’s case, the most important decision will be the wording of the referendum question itself. An all-party parliamentary committee will come up with the words, but parliamentary debate on the final text has been limited to eight days. The choice will be between two main alternatives: posing the tough, yes-or-no question, simply asking Canadians to approve the constitutional package negotiated by the premiers and aboriginals over the past six months, or a softer, more gradual approach asking whether the negotiated constitutional proposals should become the basis for completing the shape of the new Canada.

It’s a subtle difference, but the second choice, more concerned with process, would leave Quebec in a happier place. The real issue is whether the future of this country should be put up for grabs in a sudden-death vote.

The stakes are too high to warrant the risk. 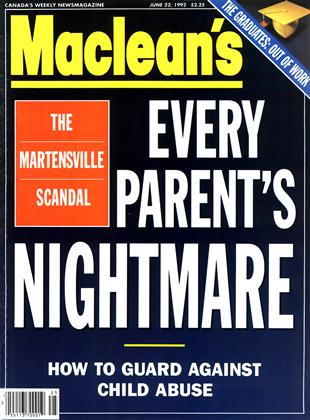