From the beginning, it was an arduous and risky expedition. On March 13, Canadian Richard Weber, 33, Russian Mikhail Malakhov, 38, and American Robert Mantell, 38, clamped on cross-country skis and set out from Ward Hunt Island, at the northern tip of Canada’s Arctic archipelago. Their goal was to travel 1,500 km to the North Pole and back—without sled dogs and without being resupplied by air. Manteli, an experienced trekker, turned back after 40 days, saying that the trip had become unbearable drudgery. Weber and Malakhov persevered, and by the beginning of last week, 90 days after setting out and 28 days behind schedule, were within 25 km of the Pole. But that was as far as they could go—treacherous ice conditions and stretches of open water forced them to turn back. Last week, the two men were skirting widening stretches of water and dashing across moving ice floes on an increasingly perilous return trip. And as the trekking community debated the nature of their achievement, the department of national defence contemplated having to mount an airborne rescue mission for the intrepid adventurers.

During the past several years, springtime treks to the North Pole have become an annual event in the high Arctic. But if Weber and Malakhov succeed in reaching Ward Hunt Island—and if all goes well, they could make it by July 6—theirs will be the first unsupported, return trip since 1909 when the American explorer Robert Peary reached the North Pole. And it may be remembered as the most difficult polar trek ever. Their achievement drew admiration in the trekking community last week, despite the fact that they stopped short of the Pole. Said Donald Smith, a Washington-based writer for the U.S. National Geographic Society: “It’s almost unbelievable that they have travelled that far in that kind of ungodly environment.”

Many contemporary trekkers use dog sleds to transport equipment, as well as aircraft to fly in supplies several times during their expeditions and to carry the team members back from the Pole. The famed Peary led an expedition that included 24 men and 19 sleds pulled by 133 dogs. By comparison, Weber, a mechanical engineer from Chelsea, Que., Malakhov, a doctor from Ryazan, a city in central Russia, and Manteli, known as “Iron Bob” to his fellow adventurers, started out with 400 pounds of supplies each, which they carried in knapsacks and on sleds. Manteli said that each man would ski for about an hour with a knapsack, attached with harnesses to a pair of sleds laden with supplies. Then they would leave their supplies on the ice and go back for a second set of packs and sleds. Said Manteli, who was in Iqaluit, N.W.T.: “I couldn’t find the motivation to sustain the day-to-day drudgery. I felt like a sled dog or a packhorse.”

The trip back should be much faster because, having used up three-quarters of their supplies, Weber and Malakhov can carry or pull all the rest as they travel. But the going was still difficult. Weber described what they had already faced in an interview last week with Maclean ’s, conducted by radio from Resolute Bay. “We got stuck on a piece of floating ice and couldn’t get off for a day,” he said. “We finally had to make a jump for it.”

At their base in Edmonton, department of national defence search and rescue officials said that they were becoming concerned that Weber and Malakhov could be at considerable risk. Said Maj. Donald Blair, head of the rescue co-ordination centre: “As the ice gets more broken up, they are putting themselves in more danger.” His department had already mounted a three-day search for Manteli when he was reported overdue after turning back from the expedition. A rescue plane picked him up 25 km away from Ward Hunt Island. Now, facing the prospect of another Arctic rescue, Blair said that some defence department officials argue that trekkers should be required to post bonds to cover the costs of such missions.

Weber and Malakhov, veterans of a 1988 Canadian-Soviet trek across the polar cap, were in good physical shape and had an adequate food supply. And Patrick Doyle, a veteran Arctic pilot who flew over the adventurers on June 13 and 14, said that the ice conditions were better than he expected. The largest leads, or stretches of open water, along their route were no more than a couple of hundred metres wide, he said.

But experts following the trekkers’ progress said that they still face an enormous challenge, even for such skilled Arctic travellers. Said Bernard Stonehouse, a biologist at Cambridge University’s Scott Polar Research Institute in England: “I’d be very surprised if they manage to complete the trip. It’s a hell of a lot more than most people have been able to do.” Added Smith: “It would be stunning to me if they made it.” 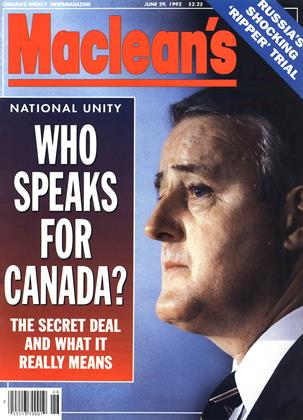