During the first game of the Stanley Cup final series in Pittsburgh last week, a Hockey Night in Canada cameraman spotted John Ziegler in the crowd. The National Hockey League president was sitting on an aisle seat, a dozen or more rows removed from the hurly-burly action below, surrounded by rabid fans cheering on their Penguins. By comparison, Ziegler looked glum, and although he later told reporters that he was excited to be at the game, the 1 image projected on nationwide television was of a chief executive with more than a hockey game on his nind. Little wonder: despite efforts ,vy Ziegler and the league to avoid the subject, reports had emerged :hat the 58-year-old Detroit lawyer’s tenure atop the NHL was under review. And from many quarters, both inside and outside the league, the reviews were not good.

For a sport struggling to build a broader U.S. audience, the controversy over whether Ziegler would keep his job could not come at a worse time. The Stanley Cup final, in which superstar Mario Lemieux led the Pittsburgh Penguins to victory in the first two games of the best-ofseven series against the gritty Chicago Blackhawks, should have been grabbing all the headfines. It certainly boosted exposure in Chicago, the third-largest market in the United States, and Pittsburgh, which has been hockey-mad ever since the Penguins won the cup last year. But just as an April player strike derailed the momentum of fan interest built by the highly competitive regular season, the speculation about Ziegler •lulled the lustre of the NHL’S playoff showcase. Although Barry Shenkarow, president of the Winnipeg Jets, praised Ziegler last week for steering the league through often difficult times, he suggested that it might now be “time for somebody else to take the reins.” Ziegler declined to comment on the situation, but his chief spokesman, William Wilkerson, told Maclean ’s: “I think he is taken aback by the way some people are anony-

mously using the media against him.”

Ziegler’s current crisis dates back to the 10day player strike. According to published reports, a group of disgruntled team owners maintain that Ziegler talked them into giving up too much to the players to settle the strike. As a result, they want to get rid of the president and his estimated annual base salary of

$500,000 before the June league meetings in Montreal, the reports say. Other owners openly faulted Ziegler for allowing negotiations to deteriorate to the breaking point. But Arthur Griffiths, vice-chairman and governor of the Vancouver Canucks, credited Ziegler with keeping talks alive when it seemed a long strike was inevitable. Said Griffiths: “A deal was made and the owners agreed to it.”

The accusations do not end with the strike. Columnists complain that Ziegler rarely gives interviews and seldom attends games. And during the 1988 playoffs, when the league went looking for him to rule on a disciplinary problem, he turned out to be away on personal business and no one knew how to contact him. Critics also hold Ziegler responsible for giving up a U.S. broadcasting deal with ESPN, a Bristol, Conn.based network then connected to 47 million households, in favor of an arrangement with SportsChannel America, a Woodbury, N.Y.-based cable network then available in fewer than 10 million homes. But SportsChannel America paid $15 million more and promised to air more games per week than ESPN.

Those who did see the final series open last week were treated to a vintage performance by Lemieux, the Montreal-born successor to Wayne Gretzky as the league’s best player. The six-foot, four-inch centre shrugged off Chicago’s close checking and scored two goals in each of Pittsburgh's two victories to ^ open the series. And when Lemieux 5 was in check, Chicago had to con| tend with baby-faced Jaromir Jagr, a o 20-year-old Czech whose spectacug lar game-tying goal in Game 1 left T teammates grasping for superlatives. The Blackhawks, meanwhile, got little production from their two offensive stars, Jeremy Roenick and Steve Larmer, and returned to Chicago to find sports fans concentrating on the fortunes of Michael Jordan and his Chicago Bulls in the National Basketball Association playoffs.

In the end, the biggest threat to Ziegler’s job may be the changing times. The league is projecting a $50-milfion loss in 1992-1993, and Ziegler’s influence on the board is not as strong as it once was. He built strong alliances with Bill Wirtz, the most powerful team owner on the board, and Alan Eagleson, the longtime head of the players association. But Wirtz is stepping down this summer as board chairman, and Eagleson lost control of the players association in 1991. In a changing hockey world, Ziegler may simply be the odd man out.

Montreal Canadiens coach Pat Burns endured four years of incessant second-guessing by reporters and fans in a city obsessed with its hockey team. Although he claimed that he had the best job in hockey, the bilingual ex-policeman lived with perpetual controversy, offending francophones if he chose to play an Anglo—offending Anglos if he chose to play a francophone. Following the Habs’

humiliating playoff loss to Boston, the 40-year-old Burns walked away from hockey’s winningest team to coach the Toronto Maple Leafs, a once proud franchise fallen on hard times. He told reporters that he was excited to join Toronto president Cliff Fletcher in rebuilding the Leafs. About his resignation from the Canadiens, Burns said simply: “It was time to move on.” 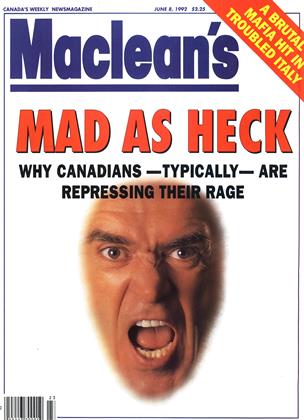