For months, Western leaders watched helplessly as the slaughter in BosniaHerzegovina became ever more savage. International military action was too risky an undertaking against local militias, hardened by ethnic hatreds and steeled by months of guerrilla combat in Bosnia’s hilly terrain. The hard-pressed 1,200-member United Nations force trying to provide food and medical supplies to the besieged population in the capital, Sarajevo, had little protection against the mortar and artillery fire from the hills around the city. The UN had other demands on its thinly stretched resources, said the world body’s Secretary General Boutros Boutros-Ghali, pointing to the millions of people dying in the drought and civil war of Somalia and to international efforts to preserve a tenuous peace in Cambodia. Then, last week, sear-

ing images of Bosnia’s suffering sheared away many politician’s reluctance to act.

The photographs and TV pictures showed the lifeless bodies of a young boy and girl, killed when a sniper fired on a bus trying to carry them and 48 other helpless children under the age of four from the horrors of Sarajevo to a haven in Germany. Two days later, at the funeral of one of the victims, TV cameras captured a mortar exploding among the mourners in the cemetery, seriously wounding the child’s grandmother. And perhaps most disturbing of all, were the pictures that provided the world with its first, grim glimpses inside Serb-run detention camps.

In a war driven by the desire of rival gunmen to partition the country’s Serb, Croat and Muslim mix into ethnically homogenous regions—the so-called policy of ethnic cleansing—the sight of frail, frightened and, in some cases, beaten Muslim prisoners eerily recalled the darkness of Nazi Germany’s concentration camps and its systematic killing of Jews. Finally, the hesitancy of western nations gave way to tentative steps towards greater intervention in the Balkan war. Declared U.S. President George Bush: “The pictures of the prisoners rounded up by the Serbian forces and being

held in these detention camps are stark evidence of the need to deal with this problem.” Washington proposed a resolution to the UN Security Council that would authorize the use of military force to ensure that relief supplies reach people in the war zone. And NATO military commanders in Brussels began drawing up contingency plans to clear a land corridor from the Adriatic Sea into Sarajevo, which some analysts said could require the deployment of as many as 100,000 ground troops.

Bush also pledged to open all detention camps to international inspectors in order to prevent atrocities. But the President insisted that he “did not want to see the United States bogged down in any way into some guerrilla warfare.” That position was in line with statements by Canadian Maj.-Gen. Lewis MacKenzie, the UN commander in Sarajevo from March until July, who received a hero’s welcome on his return to Ottawa last week. MacKenzie warned against a hasty emotion-based response. Any attempt at a military solution to the Balkan conflict, he cautioned, “would be an undertaking of monumental proportions.”

Not everyone agreed. Former British prime minister Margaret Thatcher, who was widely credited with stiffening Bush’s resolve to use force to drive Iraqi forces from Kuwait last year, publicly blamed Serbia for the war. Thatcher recommended the handing of an ultimatum to Serbia—an action taken 78 years ago, which led directly to the First World War. She said that the West should order Serbia to recognize Bosnia’s independence and stop the fighting or face military retaliation, including aerial bombing. She dismissed claims that outside intervention would lead to a Vietnam-like stalemate as “partly alarmism, partly an excuse for inertia.” Thatcher found support for her position from some unexpected sources. The Iranian government, coming to the defence of Bosnia’s beleaguered Muslims, called for an emergency meeting of Islamic states to discuss military aid for the new state. And Vatican representatives expressed support for military action, arguing that intervention was “not favoring war, but impeding war.”

Clearly, the flood of distressing images that flowed out of Bosnia created worldwide revulsion. Television pictures from Serb-run detention camps at Tmopolje and Omarska, and photographs from Manjaca camp, all near Banja Luka, provided strong indications that atrocities were indeed being committed. The TV footage, captured by a crew from Britain’s ITN news service, showed gaunt, undernourished men among the prisoners. Some of them described beatings and mass executions, allegations supported by film smuggled out of the camps showing prisoners with lacerations and wounds on their bodies.

Other photographs taken near the previously closed town of Gorazde, in eastern Bosnia, also seemed to strengthen claims of Serbian cruelties. The largely Muslim city of 70,000 is close to capitulating to surrounding Serb forces. Danish photographer Jorgen Hildebrandt said that his photographs showed the bodies of Muslim prisoners executed in a detention camp at nearby Foca. He counted 20 bloated corpses that had been dumped in the Drina River. Fingers had tjeen severed from one body and in other cases several bodies had been wired together.

But the new reports, said Mackenzie, were just one part of an overall pattern of suffering. He added that they originated “from one side only” in a region where all sides are guilty of inhuman behavior. MacKenzie has consistently argued that a political agreement

Some analysts say that by continuing to send food and supplies into Bosnia, much of which ends up in the hands of the warring militias, the UN is facilitating the continuation of the war. Critics point to the Somali civil war, for one, as an example of how fighting flares most savage-

among the warring factions—not foreign military intervention—is the only long-term solution to the Balkan war. In an interview with Maclean’s, the Princeport, N.S., native was also cautious about Bush’s offer to contribute U.S. forces to a UN operation to provide military cover for the troops that are delivering aid. “The principle has always been: don’t escalate by inches,” he said. “If you are going to go in there and stop the fighting, then that is one major military operation that would take some significant time to put together.”

ly over control of international aid shipments. In contrast, the 16-year-old civil war in Mozambique ended last week in part, experts say, because neither side could get enough food to its soldiers to sustain the war.

Some UN officials expressed concerns privately last week that the delivery of humanitarian aid to Bosnia—without negotiating a simultaneous end to the fighting—would allow the gunmen to pursue policies of “ethnic cleansing.” That abhorrent policy has been in effect in Serbian-controlled areas at least since April, according to an internal UN memo written on July 3 by an unnamed peacekeeper and

released last week. The memo, which was never forwarded to UN headquarters in New York City, was based on interviews with 18 Muslims who escaped from Serb forces along the Bosnian-Croatian border. It alleges that “house burnings, deportations, summary executions, [and] shooting in the houses are part of the present situation in the towns and villages along the north side of the border.” The document adds that Muslims were told by Serbs to abandon their personal property, including cars, and swear not to return to their homes.

Ethnic cleansing is largely responsible for the ongoing massive migration throughout the former Yugoslav republic. In the general breakdown of law and order, desperate refugees are seizing the homes and property of others who have been evicted. Obrenka Kozomara, a 51-year-old Serb, once operated a restaurant with her husband on the ground floor under their spacious apartment in the Croatian port of Sibenik, 160 km northwest of Dubrovnik. But, said Kozomara, when the war broke out her neighbors began threatening her. “People I knew would come up to me on the street and say: ‘You’re a Serb, why don’t you leave? If you don’t you’ll get your throats cut,’ ’’she said.

In the midst of a mortar attack on a residential neighborhood in Sarajevo, some terriñed onlookers watch in horror as others risk their lives to drag wounded civilians to safety: random violence

Finally, after explosives were set off inside their restaurant, the couple, along with their son and daughter-inlaw, moved to Hrtkovci, a village of about 400 houses in Serbia, 30 km west of Belgrade. There, the local Serb population had driven the larger Croat majority out.

Like many other displaced Serbs who arrived in Hrtkovci in the aftermath of the cleansing, the Kozomaras moved into one of the fanciest, vacant Croat homes that they could find. Kozomara took down the family photos left behind and replaced them with her own.

The practice was repeated throughout Hrtkovci, where Belgrade radio advertised a giveaway of houses to Serb refugees from the Bosnian fighting. But not all of the original Serb residents welcomed the new arrivals, One Serb woman, who asked not to be named, complained about the housing takeovers. “We always liked our [Croat] neighbors,” she said. “What right have these people to come in here and take over their property?”

“• It remains doubtful whether the UN’s augmented military presence in Bosnia can end ethnic cleansing. It may, in fact, allow each side to make one final push to capture more land. MacKenzie, for one, said that every indication of Western military involvement encourages the Bosnians, who have lost a lot of territory, to stay away from negotiating a lasting truce until they are in a stronger position. Declared the general: “While this talk of [Western] intervention takes place, it feeds the Bosnians’ hope that they will get that intervention and they hold on and keep up the fight.” As the peacekeepers themselves became the targets of shelling in Sarajevo last week, UN policy seemed to be confused. As members of the organization consider wider involvement in the Balkan war, they seemed to lack the determination to muster the massive force needed to end it. Said MacKenzie: “Foreign policy objectives are driven, rightly or wrongly, by images on television. But wanting to do something to help has often been the first step in a long journey of intense involvement.” Wary of all-out intervention but unable to ignore the horrors being uncovered every day, the UN appeared to be able to do little more than watch a former nation’s descent into darkness. 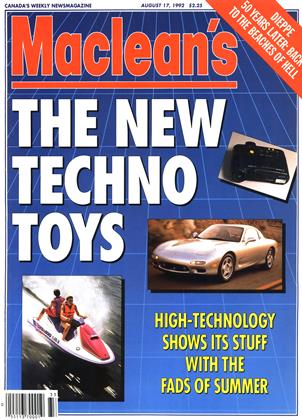