Her credentials are quintessential^ Reagan-Republican. A longtime and staunch believer in the Grand Old Party, Elizabeth Rickey, 36, was at

the core of the Republican movement in Louisiana in the 1970s, and a Ronald Reagan delegate in the 1980 and 1984 presidential election campaigns. But Rickey, nominated by the state party chairman as a Bush delegate this year, turned in her credentials last month. “I can’t go as an advocate of George Bush to the Republican National Convention,” said Rickey, who boldly asserted that the party and its leadership had run out of ideas and policies. “It’s like going to a train wreck,” said the New Orleans college instructor. “I’d consider voting for [Democrat William] Clinton if I thought it were the right thing to do. I’m really torn; I want something to be for in my party. But I don’t see a willingness to look within the party and change.” Pausing for emphasis, she added: “George Bush symbolizes the decay in the party.” It is Republicans like Rickey whose support Bush once enjoyed, has since lost, and will have to win back when he kicks off his re-election campaign after the Republican National Convention in Houston this week.

But analysts say that it will be extremely difficult for the president to shake off his image as the leader of a party that has run out of steam after 12 years in power. The 68-year-old Republican standard-bearer, they contend, must not only shore up his core support among diehard right-wing Republicans, but he will also have to attract moderate members of the party—especially middle-class baby boomers. To that end, the president announced last week that trusted friend James Baker, who ran his successful 1988 campaign, would resign as secretary of state on Aug. 23 to become White House chief of staff and senior presidential counsellor, a new post putting Baker in charge of Bush’s re-election bid. His success in uniting a badly divided party will determine whether the Republicans secure another four years in the White House. Said Norman Podhoretz, editor-in-chief of Commentary, the Manhattanbased bastion of right-wing orthodoxy: “George Bush has not defined his point of view; he doesn’t stand for anything which can inspire

support.” Added Podhoretz: “The Bush problem is like coitus interruptus. In every area— foreign, domestic and economic policy—there a failure to consummate.”

In fact, many Republicans acknowledge that Bush has not only squandered the Reagan legacy that he inherited four years ago, but he has also failed to build a new consensus to tackle issues of the day. The bricks and mortar of Reagan’s once-unassailable political fortress countered Soviet expansionism abroad and fostered a free-market economy at home that unleashed entrepreneurial energies through tax cuts and deregulation. But forces that neither Bush nor his party can fully understand or control have laid siege to that very fortress.

On his Cold War watch, Reagan rapidly built up the country’s defences—and defence industries. He poured enormous scientific and engineering resources into the military-industrial complex, while the United States’ main economic rivals, Japan and Germany, devoted their resources to the civilian sector. And, economists claim, the Reagan administration distorted its trade policy to serve its geopolitical goals, trading foreign access to America’s burgeoning market for military alliances and bases. Said Jeffrey Faux, president of the Washington-based Economic Policy Institute: “The United States traded off its economic

“George Bush has to start campaigning and he has to go over his record and programs and make the sharp contrast between the very liberal, failed governor of a small state versus the leader of America.”

advantages for political and military ones.” And, although Faux and others agree that Republican administrations can rightfully take some credit for the collapse of the “evil empire,” as Reagan once called the Soviet Union, they argue that the defence-oriented economy exacerbated the relative decline in American competitiveness. While postwar Japan and Germany improved their workers’ skills and built up their technologies and infrastructures, public investment in the U.S. economy declined dramatically. As a result, Japan and Germany have cornered the market on such products as cars, VCRs and semiconductors— the foundation of a prosperous industrial economy. Said Jeffrey Garten, a managing director

“In the voting booth, we have to get them to think about integrity, leadership, experience, values. The Democrats are trying to usurp issues that have been Republican for 50 years.”

of The Blackstone Group, an influential New York merchant bank: “George Bush has not articulated a foreign policy for the 1990s after the Cold War. He has to have a foreign policy which reinforces domestic economic goals.”

It is the Democrats under Arkansas Gov. William Clinton who are focusing on rebuilding the domestic economy as their main issue in the 1992 election. The Democrats, many analysts say, are better able to exploit the issue because of the legacies of presidents Franklin Roosevelt, John Kennedy and Lyndon Johnson, who used the tools of government to repair the potholes in the country’s infrastructure. The

think what George Bush needs to do is outline a vision for the next four years. I don’t see any problems for the President.”

Republican party, they say, has become more conservative and less interventionist at a time when Americans are calling for Washington to get the country moving again. Said Kevin Phillips, editor of the conservative Bethesda, Md.-based American Political Report : “The Republicans can’t recapture the old spirit. Bush can’t deal with the grand strategy, be it in Kurdistan or Kansas.”

In any case, Bush is saddled with the weakness of an economy that slumped three years ago and shows few signs of recovery. Analysts say that the Reagan economic boom camouflaged the fundamental flaws in the economy that had been building since the late 1970s. Real wages declined; the government borrowed heavily abroad to finance its tax cuts for the wealthy, and the balance of payments collapsed as Americans bought more than they sold. Eventually, jobs were lost and living standards for the suburban middle class—the bedrock constituency of the Reagan revolution—plummeted. Said Faux: “The Bush people simply didn’t see what hit them.”

Critics say that those problems have left Bush without policies or even a strategy to deal with the Democrats. They maintain that the only campaign he can now run is to paint Clinton, who maintains a 20to 26-point lead over Bush in national opinion polls, as an adulterous, draft-dodging governor of a small two-bit state who cannot be trusted to run the country. Said Republican political analyst Lyn Nofziger: “He has to go and kick the hell out of

Bill Clinton and portray him as a womanizing sleazebag.”

But such a strategy could backfire, because American voters have grown weary of mudslinging. As well, the president last week found himself in the uncomfortable position of defending his own morals. Rumors of a romantic liaison between Bush and a former aide, Jennifer Fitzgerald, have been circulating for years, and the tabloid New York Post renewed the controversy by publishing a story, based on a new book, alleging marital misconduct.

Asked about the report at a news conference to announce loan guarantees to Israel, a visibly angry Bush called the allegation “a lie” and accused reporters of pursuing “prurient interests.” But the accusations against Bush undermine his own family-values attacks on Clinton. Said a Re-

publican pollster close to the Bush campaign, who spoke on condition of anonymity: “This campaign is doomed. The only message we have is why Bill Clinton doesn’t deserve the election, and that is the only message we’re capable of delivering.” But, he said: “I don’t think the character issue is going to stick.” Bush appears most vulnerable on the economy. The collapse of Reaganomics has had a devastating effect on the socially liberal wing of the Republican coalition. Many Reaganites who considered themselves conservative on economic policy but moderate on social issues

argued that an expanding economy, spurred by supply-side economics, would spawn jobs and new opportunities for the black underclass in the inner cities and the working poor in the rust belt of the industrial Midwest. It was a privatesector solution to what was traditionally viewed as a public-sector problem.

However, many economists now say that the 1990s proved that analysis to be faulty, with not only blue-collar workers but well-educated middle-class voters as well losing their jobs. In many cases, those are the same voters who support the pro-choice (liberal access to abor-

tion) movement that has turned into a political minefield for Bush and the party. The Republican platform at the Houston convention calls for a constitutional amendment banning most abortions. But pro-choice delegates, led by activist Ann Stone, have threatened a bitter convention-floor fight against the party platform. Said disillusioned Republican Rickey of Stone: “She is the future of the party if it chooses to open up.” But she added: “If not, the party will ultimately collapse.”

than Bush himself. Until last August, he was riding the crest of enormous popularity following the Persian Gulf War—even claiming that he had vanquished the spectre of American impotence in Vietnam. Now, he finds himself attacked from all comers for not having, in his own words, “the vision thing” to renew America socially and economically. With less than three months until the Nov. 3 election, time is clearly running out for the incumbent. Said presidential scholar Mark Rozell: “The odds are clearly against him unless there is some fundamental change in the economy or an ‘October surprise’ [some military action] followed by a rally-aroundthe-flag phenomenon.”

I i I Campaign sponse the downtown Room. nerve workers Housed centre mansion of call in Little Democratic it the in Rock, Quick a stately Ark., presiReF dential candidate William Clinton’s socalled war cabinet hums with the noise of TVs, phones, wire services and fax ma-

chines. From there, the Clinton forces launch their deadly responses to a slick Republican attack campaign aimed at discrediting the Arkansas governor an inexperienced, tax-and-spend liberal who cannot trusted to run the country. Their war motto: never the Republicans attack without responding in the same news cycle. Said one campaign aide who spoke on condition of anonymity: “We are not going to President George Bush or his political operatives use scare tactics to paint Clinton as an irresponsible alien from outer space.” He added, “We developed the weaponry to counterattack.”

Last week, the battleground was health care. Bush derided a Clinton proposal for expanded health care a bungling, bureaucratic nightmare with Communist undertones. “It has,” Bush said, “the efficiency of

House post office with the compassion of the KGB.” The Clinton team swiftly responded by accusing Bush of neglecting soaring health-care costs, which they claim have risen 32 per cent since the President took office in January, 1989. Costs, said Clinton, have risen “like a patient’s fever chart.” Both candidates’ charges made the evening news.

And even as Republicans prepared to launch a fresh volley of attacks during their party convention in Houston this week, the Democrats promised to return the fire. A Clinton aide said that the lesson from the failed 1988 campaign of former Democratic presidential hopeful Michael Dukakis was threefold: “Never let up, respond immediately and seize the initiative.”

In fact, some Republicans lauded Clinton’s surgical tactics even as they delivered potentially damaging blows to Bush’s flailing campaign. “It’s working and it’s impressive,” admitted Republican political analyst Lyn Nofziger. He added: “The Bush administration didn’t expect and is not prepared for it. They haven’t been prepared to go out there and wage a war.” 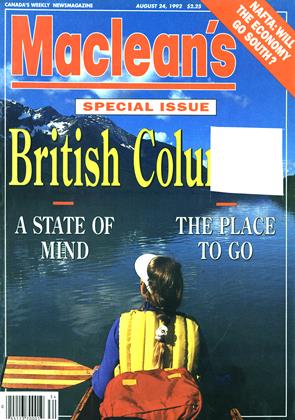