Ever since French scientists discovered the human immunodeficiency virus (HIV) in 1983, medical researchers around the world have worked on the assumption that the virus causes AIDS. In recent months, some scientists have challenged that belief and suggested that HIV, even if it is closely related to AIDS, may not be the direct cause. Another startling possibility emerged last week when about 10,000 scientists met in Amsterdam for the eighth international conference on AIDS. Several AIDS researchers, including one Canadian doctor, told of treating patients who suffered from symptoms that resembled those of AIDS, but who showed no signs of having HIV. Dr.

Allan Ronald, an infectious-diseases specialist at the Health Sciences Centre in Winnipeg, said in Amsterdam that a middle-aged Manitoba man, who did not test HIV-positive, died of an AIDS-like illness several years ago. “He was completely like an AIDS case,” said Ronald, “except that he did not have the virus.”

Another intriguing possibility was raised by Dr. Sudhir Gupta, an immunologist at the University of California at Irvine, who announced at a news conference in California that he had | found an unusual virus in a woman §• suffering from an AIDS-like condition. *

But many scientists attending the conAIDS demonstrators in Amsterdam: an epidemic still developing in unexpected ways ference minimized the significance of

Gupta’s findings. They said that far more laboratory work is needed to determine whether a new virus had been found. Indeed, some conference participants took a dismissive stance towards Gupta’s announcement. Said Dr. Max Essex, a microbiologist at Harvard University in Cambridge, Mass.: “I’m not overwhelmed by it. I’d place the odds at five to 10 per cent that this might lead to something.”

Still, the disclosure that doctors have discovered illnesses that closely resemble AIDS without HIV being present raised disturbing new questions about an already perplexing disease. Dr. James Curran, an expert on AIDS with the Atlanta-based Centers for Disease Control, noted that the mysterious new cases may be nothing more than an extremely rare immune system disease discovered coincidentally by scientists studying AIDS. Kenneth Rosenthal, director of the molecular virology and immunology program at Hamilton’s McMaster University, reported one such case last week. He said that doctors found an Ontario resident

who, although he is HIV-negative, has been suffering from AIDS-like symptoms. Said Rosenthal: “The fact is, we are looking carefully at the immune system in ways we didn’t before. It’s not surprising there are other mechanisms that can lead to immunodeficiency.”

Indeed, most experts concluded that the

cases discovered so far must be studied further because there are no obvious reasons why the patients were displaying AIDS-like symptoms. Dr. David Ho, a scientist at the Aaron Diamond AIDS Research Center in New York City, told the conference that he had found 11 cases in New York and Los Angeles during the past three years. Some of the men were homosexuals, but some of them were neither gay nor intravenous drug users, another high-risk group. Ho also noted that the sexual partners of two of the men had not displayed any symptoms. In Irvine, Gupta said that he and his team of researchers found that a woman of 66 and her 38-year-old daughter both had the same newly discovered virus, but only the mother had developed symptoms of AIDS. Said Gupta: “We can’t say if this is a new virus or an old virus. All we can say is it’s different.” Although the scientific community was divided over the significance of the new cases, public health officials said that there appeared to be no reason for excessive concern, particu-

larly about blood used for transfusions. Dr. Maung Aye, national director of blood services with the Ottawa-based Canadian Red Cross Society, said that all donated blood is tested for at least five different viruses. As well, Red Cross workers question potential donors about their personal lives in order to screen out those engaged in risky behavior. “They are grilled by a nurse to see whether they could be remotely ill,” said Aye. “You put everything together and it forms a very good safety net.” But in the United States, Dr. Anthony Fauci, head of the National Institute of Allergy and Infectious Disease, advised scientific and medical researchers to publicize their findings promptly if they came across cases of HIV-free AIDS to limit risks to public health. In many cases, scientists wait several months to publish the results of research in scientific journals.

Meanwhile, new data suggested that the

incidence of AIDS may be growing with unexpected rapidity among women in one of Canada’s regions. Last November, officials of the Newfoundland health department began testing for HIV in pregnant women between the ages of 15 and 29. The department planned to run a two-year study, but released its results last week, 14 months ahead of schedule, after finding that six of 5,200 women tested had HIV. According to statistics provided by provincial health officials, the rate of infection among pregnant women in Newfoundland may be 10 times as high as it is among Manitoba women. Said Sam Ratnam, who is in charge of the survey: “These figures were far higher than we had expected.” Confronted by the results, the Newfoundland government recommended that all pregnant women in the province be tested for HIV. For many, it was just one more reminder that the AIDS epidemic continues to develop in unexpected ways, and places. 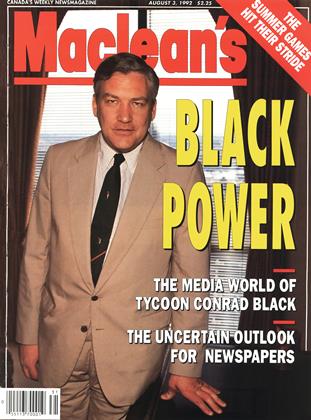