Up from the ashes

Felipe Alou leads the Expos towards the top

Felipe Alou is arrayed in his customary pregame garb: white sweat socks, white undershorts and an electricblue Montreal Expos workout jersey. He is a little irked, having been asked about the state of negotiations to renew his contract as the team’s manager. “There aren’t any negotiations,” he snaps, the Spanish accent crackling in his otherwise flawless English. “And I’ve been around this game long enough to know that nothing’s for sure if you don’t have it all nicely written down.” He ponders a moment, toying with the felt-tip pen he has been using to compose the lineup for the evening’s game, before adding, in a softer tone: “But I can’t see any possible reason why anybody around here should be dissatisfied with the job I’ve done because, let’s face it, when I took this team over last May it was bankrupt.”

Few who follow the fate of Canada’s entry in baseball’s National League would disagree with that assessment. In the four months since Alou assumed control of the Expos’ on-field activities, the club has blossomed beyond the wildest expectations of even the most diehard

fans. Picked by almost all preseason prognosticators to finish at or near the bottom of the National League East, the Expos were still battling fiercely for a shot at the divisional title. Last week, the team came within a hair’s breadth of slicing in half the Pittsburgh Pirates’ four-game lead, downing the Pirates 6-3 in the first of a crucial two-game series and suffering a heartbreaking 3-2 loss in the 13th inning of the second matchup.

The Expos’ thrilling play on the field has ignited a renewal of interest in the stands, almost doubling the average attendance per game and helping to turn around a franchise that was on the brink of collapse only a year ago. And while there are many reasons behind that resurgence, much of the credit belongs to the tall, lean native of the Dominican Republic who, 10 days after his 57th birthday last May, replaced Tom Runnells as manager. As Larry Walker, the Canadian right fielder who provides the Expos with offensive punch and defensive theatrics, remarked: “There’s only one basic difference between the team that was going nowhere last spring and the

one we have now, and that’s Felipe Alou.” Precisely how Alou has wrought his magic is difficult to discern. Expos president Claude Brochu, who leads the consortium of 13 Montreal investors who bought the club from billionaire Charles Bronfman a year ago, cites the fact that Alou is a wily baseball veteran in charge of a collection of immensely talented but very raw youngsters; they include his own son, 26-year-old outfielder Moisés, and his nephew, relief pitcher Mel Rojas, 25. “He’s the perfect father figure for all those kids,” says Brochu. The few veterans on the team agree, but also point to Alou’s 17 years as a highly regarded major-league player and 12 more as a winning coach in the minors. “You just gotta respect the opinions of a guy with a career like that,” says 38-yearold catcher Gary Carter, who owns a distinguished 18-season big-league record of his own.

Alou dismisses the idea that he possesses any mysterious managerial elixir, making it clear with a wry grin that he regards the entire notion as faintly absurd. “There may be strategy in this game but there are no secrets,” he scoffs. “What you have to do is know the man inside each player and then stand back to let him play his own game the way he can.” Alou certainly knows his players: he has coached nearly all the team’s budding young stars as they rose up through the Expos’ minor-league organization.

That intimate knowledge has allowed him to intervene at critical mog ments to soothe the often fragile ego § of the modern professional athlete. 5 Earlier this year, second baseman Dea lino DeShields, a 23-year-old with a g talent as tightly strung as his personal“ ity, complained that the Expos organization was placing too much pressure

on such younger players as centre

fielder Marquis Grissom, Walker and himself. “They pay me like a rookie and expect me to play like Ryne Sandberg,” fumed DeShields, referring to the Chicago Cubs second basemen who, at that time, was baseball’s highest-paid player. Unlike his predecessor Runnells, a strict disciplinarian, Alou did not reprimand DeShields. In fact, he publicly expressed his sympathy and privately took him aside for a fatherly chat. DeShields responded by developing into the Expos’ main spark plug, virtually carrying the team through the midsummer as he added 40 points to his batting average and 30 steals to his record on the base paths.

Alou handles his veterans with similar concern. Earlier this month, team captain Tim Wallach, who has struggled at the plate all year, suffered through a dismal performance in a critical game with the St. Louis Cardinals at Montreal's Olympic Stadium. The 35-year-old third baseman mishandled three balls in the field, struck out twice with runners in scoring position and snuffed out an Expo rally by hitting into a double play. The normally steady Wallach, in many ways the soul of the Expo team,

was booed mercilessly by the fans at the Big 0. But Alou not only refused to criticize the veteran’s play, he also angrily dismissed suggestions to bench him. “Everybody has a bad game now and then,” said Alou. “I’m certainly not going to punish a player of Wallach’s stature.” The very next night, Wallach drove a two-run homer over the left-field fence, one of

two hits in four times up, and batted in three runs. The fans gave him a standing ovation, which prompted Alou to run a hand through his grizzled grey curls after the game as he wondered aloud: “Who can tell with fans? They wanted to hang Eli [Wallach’s nickname] from the rafters last night. Tonight, he’s a hero.” Alou’s personal rapport with Montreal’s

sometimes fickle baseball devotees is on much more solid ground. For a start, he is married to a local woman, Lucie Gagnon. He lives during the season with his wife and their two infant children in Saint-François de Laval, an archetypal French-speaking suburb north of Montreal. In terms of fan support, Alou’s marital link with Quebec’s majority francophone population is important. If it were not, the Expos organization would not be expending so much effort in an ongoing attempt to gain the rights to former Toronto Blue Jays pitcher Denis Boucher of Lachine, Que., whose linguistic origins appear to carry as much value as his so-far mediocre record in the Cleveland Indians organization.

But the real secret of Alou’s success probably lies within the man himself. “The day I took this job I told my players that they should not be afraid of losing,” he recalls as he sits in the bowels of Olympic Stadium. Loss is a concept he understands, despite his fine baseball career. He was bom, like ^ his big-league baseball-playing brotha ers Matty and Jesus, in poverty in the z Dominican Republic. He has been married three times, unions that re-

0 suited in 10 children. His firstborn,

1 Felipe Jr., died in a swimming-pool u accident when the boy was only 15.

“That was a terrible surprise,” he

says quietly, pausing to add: “But I

haven’t been surprised about anything else in my life since I lost my oldest son.” Felipe Alou has perspective, which is one reason why, no matter how the Expos do in this year’s pennant race, he is likely to be managing the team for some time to come. 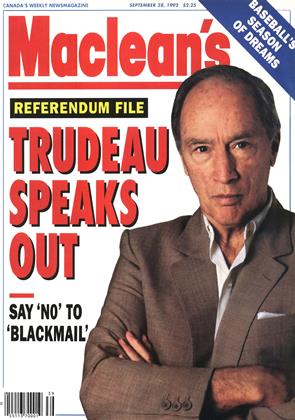