Five elementary and high-school teachers from across Canada talked to Maclean’s about the challenges and frustrations of their jobs. They note that the changes since they were students themselves are striking, especially the pressure that now is placed on young charges. Excerpts:

Ellen Massey, 33, has been teaching English and drama at Dryden High School in the northwestern Ontario town of 6,500 for the past five years.

I don’t think anything can really prepare you for what’s going to happen in the classroom. I had been a teacher for two weeks when a Grade 9 boy brought a gun to school. There was a standoff, but it was handled really well. After that, I felt vulnerable walking down the halls, especially because I was new in town.

I’m not sure that the high-school curriculum has really changed, but I don’t remember being as rowdy as the students I have. The students

really want fun and immediate results. They have a strong sense of their own rights without a sense of the responsibility that should go along with it. I feel it’s really important for me to know what’s going on in television, movies and music. The students respond a lot better if you see them as individuals and have a sense of who they are. There’s a song called Smells Like Teen Spirit by the rock group Nirvana. One of the lyrics I can make out is, “Here we are now, entertain us.” On my bad days, that goes through my head.

You’ve usually got one or two students in your class for whom almost nothing seems to work. But if you come in with a couple of clearly defined rules and you’re consistent and fair in applying them, things usually work out. I’ve only sent students to the office a couple of times and when Idol always feel that I’ve failed in some way, that there was something I should have done. Many parents are very supportive, but many don’t seem to care: you don’t see many of the parents at parent-teacher inter-

Richard Rivers has spent 18 of his 20 years as a teacher in Halifax junior high and high schools. This year, Rivers, 45, is teaching physical education to students at Highland Park Junior High.

Last year, I was teaching junior high for the first time in quite a while. Those are the children that are sort of feeling their hormones, and basically this is the age where kids are in a quandary. Kids are lacking a lot of selfesteem, and a lot of our programs are channelled to help that. Compared to when I was in school, I look at the kids as in some respects a little more mature, but also lacking commitment, lacking dedication and at times lacking a focus.

Today, so much of the focus is on the dollar. Kids are arranging their courses in high school so they can work. Jobs are coming ahead of school in a lot of cases, and it’s pretty sad. These kids are looking to work wherever they can, to get money to put $100 sneakers on their feet.

I think the majority of them are getting a good education, but I’m more concerned about those students who aren’t as motivated as others to channel themselves into programs that would take them some place. People draw the analogy that in my day graduating from high school was like graduating from university now. These kids may graduate with no marketability.

Before, you used to be able to put your hand on a student’s arm and say, “Pay attention.”

Nowadays, you’ll get somebody saying, “You can’t touch me.” There are a few more people who are confrontational. I think a lot of students are not committed, are not focused. They’re there because they have to be.

Sandra Taylor-Tran, 32, has taught highschool-level English as a Second Language for the past 10 years. This year, because of cutbacks at the high-school level, she has moved to Connaught Community School in Calgary, where

of others, of the world around them.

When you’re on the front lines, you really do see where the kids are at. You might not know what the solutions are, but you see the problems. The frustration comes from spreading myself so thinly playing teacher, social worker, psychologist, policeman. I come home wondering how well I’ve done. I would like to see a school as more of a community centre, offering services that the kids are needing more and more. We could play our roles more effectively.

choices as well. And I guess we were all sort of imbued with a lot of idealism. I think I detect a bit more cynicism in some ways. We’ve got to give our students a sense of hope.

There are a lot of signals out there that even a postsecondary education doesn’t guarantee people a livelihood. There are a lot of students with jobs now. A number of staff here make the point that, even though the money may look good now, they should look at graduation and a degree and job training as the ultimate goal.

I think the education now is at least as good and generally better than the one I received. There’s more awareness of a lot of things like individual differences, learning styles. There’s a lot more choices. I think among educators today there’s a genuine effort to get to know each student as best we can. I think there’s a greater sensitivity now. One of the positives about being a teacher is our clientele never changes its age, and I find that one of the reasons why I’m progressive and open-minded is the influence of young people working with us.

The high-school classroom has not changed all that much, which is amaz| ing considering the number of years 1 between when I was in school and > today. There are still many traditional classrooms with desks in rows and the teacher in front doing most of the talking. And that’s a little disappointing, because a lot has happened in educational theory. I think many teachers model themselves on the people they saw teaching when they were youngsters. Also, the teachers’ colleges really don’t prepare us for innovative teaching techniques or practices. I think we must be about the slowest part of society to change.

One of the things I’m trying this year is the co-operative approach to learning at the Grade 10 level. Kids work in groups of three or four. They’re given a task and they have to decide how they’re going to proceed. Then they evaluate themselves as to whether they’ve succeeded. The class motto is that no one of us is as smart as all of us put together. They’re starting to feel that they’re real people, worthy of respect.

The kids in today’s high school have so many more pressures and tensions in their lives than when I was in school. There were more opportunities for jobs, and today the pressures on the kids to compete are great. They see singleparent families, disruptions in their lives, medical problems, social problems, they see the economic situation as being really frustrating. I don’t envy them. They need all the support they can get. They need a more compassionate, more caring school. I wouldn’t trade places with them for anything. □

she will help children from Southeast Asia, the Middle East, Latin America and elsewhere learn English.

I’d always wanted to be a teacher, but my reasons now are different than when I went into it. I really wanted to impart knowledge. What we do is ignite curiosity, we fan it and feed it. That’s why I stay in education. The reality once you’re in there is far different. What I saw teachers doing was very traditional.

There were 30 WASP students sitting there in rows and the teacher was imparting knowledge. But we have the global community at our fingertips.

Now we have multiethnic students. The schools have very high percentages of people from other countries. Our decision makers are still thinking in terms of white middleclass students.

I think education means learning how to think. I don’t think it has anything to do with the actual curriculum.

Children need to learn how to ask questions of themselves,

I think that the public schools are an excellent place for the type of education that children need to exist in a multiethnic society. I think that’s where the real learning and education takes place, in the interaction with other students. Someone may say, ‘What about the basics?’ And I think, of course, that has to happen too. If people in the schools know what their roles are, then that will happen.

Douglas Still, 41, has been teaching social studies at Humboldt Collegiate Institute in Humboldt, Sask., for the past 18 years. He also is mayor of the northern Saskatchewan town, graduated from the school and has a 16-yearold daughter in Grade 11 there.

I think probably one of the biggest changes is that society has changed so drastically. I guess when I went to school about 25 years ago, the pace of life was a little § different. There were probari bly far fewer pressures on S students and probably fewer 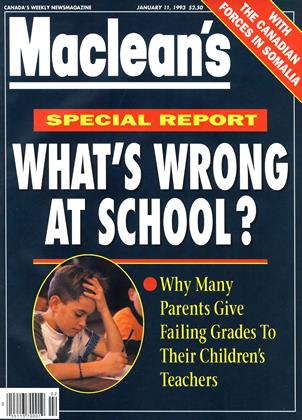