A smile of satisfaction lifts the corners of Marc-André Bouliane’s drooping moustache as he relishes the epithet most often used to describe him. “They like to call me a pit bull,” says the 42-year-old Quebec coroner, chuckling quietly. “I have to admit the comparison is accurate.” Short and bulldog sturdy, Bouliane certainly looks the part—and acts it as well. He neither fears a fight nor is quick to retreat, as an assorted host of appointed and elected Quebec officials have discovered to their dismay over the past six years. For much of that time, they have been engaged in a battle with Bouliane over the alarming toll of death and injury suffered by Quebec children in school bus accidents. “I’ve been on a crusade,”

Bouliane declares, “but something has to be done to cut through the bureaucratic inertia and political apathy that is killing and maiming our children.”

It has been a long, lonely, and often frustrating struggle for the feisty coroner, one that began in 1986 when he first presided over an inquest into the death of an eight-year-old boy run over by a school bus after he got off the vehicle. Since then, Bouliane, the only one of Quebec’s 135 coroners who has the authority to hold inquests across the province, has conducted seven similar public inquiries, each successively more sweeping in scope—and each calling for extensive improvements in school bus safety procedures. The most recent—and most ambitious— finished in November, after Bouliane heard testimony over a six-month period from 284 witnesses, including three provincial cabinet ministers, dozens of provincial civil servants and 147 local school board officials, as well as school bus owners, drivers, bus manufacturers and the parents of several of the children who have died in school-busrelated incidents. Bouliane is currently preparing a final report on that inquest, which he says will be ready for public release by mid-January. But the former Crown prosecutor says that he is not anticipating early action from the authorities, largely because “I’ve been issuing essentially the same recommendations since 1986 without a lot of success.”

The coroner’s crusade has been fuelled by bleak statistics. During the six years since his first inquest, he says, Quebec school bus accidents have claimed the lives of another 29 children. “And that is only the tip of the iceberg,” he maintains, pointing out that in the

past 10 years at least 5,000 children were injured, with 500 of those injuries classified as serious. Bouliane, whose parents were killed in a car accident when he was seven, angrily adds that the province’s school bus accident record is eight times higher than that in Ontario and the United States. “The stupid, senseless reality is that almost every one of those deaths,

almost every one of those grave injuries, could have been avoided,” he declares.

His most recent inquest, into the death of six-year-old Jean-Michel Bisson of Aylmer, offers a casebook example of the problem. On Feb. 25,1982, the child got off the bus near his home. As he passed in front of the vehicle, he bent over to pick up some hockey cards he had dropped. The driver did not see the boy, who was hidden below the bus’s protruding hood. He pulled away, crushing young Jean-Michel

under the vehicle’s wheels. The child died instantly. Even though that tragedy occurred 10 years ago, Bouliane says that it fits a pattern that is almost always the same. “The accident involves a child between the ages of five and eight,” he explains. “It happens when a child is forced to cross in front of his school bus, and it involves a vehicle with an extended nose.”

To resolve the problem, Bouliane has several basic recommendations. He wants the authorities to gradually replace the province’s 7,000 long-nosed school buses with flat-nosed vehicles that offer drivers a better view. Although 2,000 flat-nosed buses are already being used in Quebec—other provinces also have a mix of both types—Bouliane is also calling for modifications to flat-nosed vehicles, especially changing the window design to increase driver visibility. Another recommendation: adult monitors to accompany bus drivers on routes where children have to cross in front of buses. And, finally, he wants new licensing measures for school bus operators and heavier police surveillance of the drivers. Bouliane notes that training programs for Quebec’s school bus drivers do not differ much from those in other provinces, but he speculates that, in general, Quebec’s drivers may be “less responsible.”

The coroner’s recommendations have met with vociferous protests from both provincial authorities and local school boards. Provincial government spokesmen complain that it would cost $15 million to phase out the long-nosed buses over a 12-year period. School officials also claim that the cost of adult monitors on school buses could reach $34 million per year. Bouliane concedes that his proposals would involve heavy expenditures by financially pressed authorities. But, he responds, “What is the price of a single child’s life?”

In fact, Bouliane’s long crusade may finally be having an effect. In November, after receiving a 10,000-signature petition urging the implementation of stronger safety measures, provincial Transport Minister Sam Elkas unveiled a new school bus driver| training program. Elkas’s initiative z also included a $2-million scheme to I improve the design of Quebec’s 6,500 lJ conventional long-nosed school buses, primarily by equipping the vehicles with retractable extension arms that force children to move into the driver’s field of vision when crossing in front of the bus. For Bouliane, who has three school-age children of his own, the steps are encouraging. But he says that they still fall far short of the measures required to deal effectively with the issue he has doggedly pursued for the past six years. “It’s mostly cosmetics,” he complains with a growl—not unlike that of a pit bull. 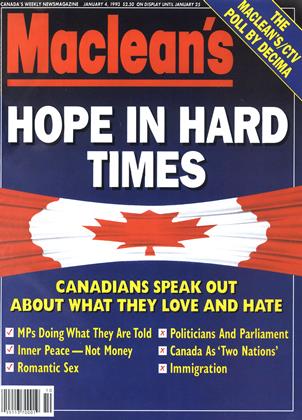