Doing business in Russia can be difficult at the best of times, but nothing James Wade encountered in three years of travelling to the former Soviet Union prepared him for the cataclysmic events he witnessed in Moscow last week. From the ninth floor of the Ukraine Hotel, only 500 m from the Russian parliament, the Canadian engineer watched as thick black smoke billowed from the imposing white building while government troops assaulted rebel parliamentarians inside. Wade, president of a small oil and gas company, Markham, Ont.based Bitech Corporation, was even closer than the television cameras of CNN, which were in another building 200 m behind the Ukraine. “The whole hotel shook and we were confined inside for most of the day,” Wade recalled. “Everyone was quite cool, though, and around 5 p.m., shortly after the hard-liners surrendered, we were able to go outside for a walk.” The shoot-out between the forces of reform-minded President Boris Yeltsin and renegade conservatives reverberated around the world, but for Wade it was only a temporary interruption in his busy trip. “Our meetings resumed the next day and there is no thought of leaving,” he said. “We are here for the long term.” That kind of determination is shared by a wide range of Canadian executives with capital or operating businesses in Russia. Drawn to the former Soviet Union by the lure of abundant natural resources and a virtually untapped consumer market of almost 300 million people, many Canadian investors have struggled for years to establish joint ventures with partners in Russia and surrounding states such as Ukraine and oil-rich Kazakhstan. Since the late 1980s, Canadian companies have helped create between 150 and 200 joint enterprises—co-owned with citizens of the former Soviet Union. Total Canadian investment rose to about $400 million last year, up from about $50 million in 1988. Trade figures are just as dramatic. For the first seven months of 1993, non-grain exports to Russia reached $185 million, up from $30.5 million for the same period in 1992. Said Denvil Brown, an Ottawa businessman in the midst of establishing a company that will service foreign cars in Moscow: ‘This is one of the last great frontiers.”

For most Canadian investors, however, establishing a foothold in former Communist nations that are still struggling towards political stability has been a daunting experience. Many entrepreneurs visit, talk and then leave, overwhelmed by obstacles such as a wildly fluctuating currency with severe limits on its convertibility. Others tell of frustrating meetings with partners who do not understand Western business practices. A precarious political climate in which corruption flourishes and regulations change overnight also hampers operations.

But few among those already there are willing to withdraw without a fight. Some even claim that events such as last week’s showdown, with its clear resolution in favor of Yeltsin, was a welcome step towards greater stability. Christopher Albinson, formerly a lecturer at the University of Western Ontario specializing in Russian joint ventures, is now an Ottawa-based development consultant for the World Bank. ‘You can operate better in a hostile but stable environment than you can in an unstable one,” Albinson said. “If Yeltsin is able to consolidate the economic reforms he has been trying to bring in for the last two years, then it’s a positive move.”

That, in fact, is the vital question that has hung over the region since the Soviet Union disintegrated in December, 1991. Early the next year, Yeltsin decided to implement his version of so-called shock therapy to convert Russia’s inefficient, seven-decade-old Communist economic system into a free market, almost overnight. On Jan. 2, 1992, most prices were liberalized, with experts predicting that a flood of entrepreneurs would lower prices through intense competition. But change was haphazard, with prices shooting up—some to more than 10 times their previous levels—while the government kept a select few artificially low for political reasons. In the past, expensive bread and violent social upheaval have gone hand in hand in Russia. To meet the soaring demand for rubles, the central bank printed so much money that, at one point, it ran out of paper for bank notes. Hyperinflation followed and there is no doubt that many Russians are indeed in shock: despite controls in some areas, food costs alone now account for some 80 per cent of the average income.

The initial rush to privatize state-owned enterprises eventually led to the growth of underground economic networks, referred to by Russians as “the Mafia.” At first, profiteers, often former state employees, capitalized on inside knowledge of upcoming sales of key government assets. They bought the properties at low prices and then re-sold or leased to the

highest bidders. Later, privatization slowed, and in a frantic effort to restore order, Moscow has passed a welter of laws that are frequently contradictory. Said Larry Black, director of the Centre for Canada and the Soviet Successor States at Carleton University: “It’s an incredible mess. Even their own experts don’t know fully what is going on. Not surprisingly, that makes foreign investors extremely cautious.”

Such political and economic chaos means that Western companies looking for quick profits in Russia are likely to be disappointed. Many entrepreneurs, like Bitech’s Wade, stress that they are prepared to wait and to build their business slowly. McDonald’s Restaurants of Canada Ltd. negotiated for more than a decade before opening its first, 700-seat restaurant in Moscow’s Pushkin Square in early 1990. Although the hamburger giant has plans for at least 20 more outlets in Moscow, so far there are only three.

McDonald’s is one of the few foreign businesses that sells all of its products for rubles. The currency is unattractive to many foreign companies because it is almost inconvertible outside Russia and can only be exchanged at regular bank auctions where its value cannot be predicted. With Russians eagerly lining up to pay 1,100 rubles (about $1) for a typical meal of a hamburger, french fries and tea, the gigantic chain has no shortage of local currency. Some is used to pay its Russian suppliers and more than 3,500 employees. With the rest, the company is making enterprising investments, including the purchase of real estate. The joint venture Moscow-McDonald’s now owns a 12-storey office building in downtown Moscow which it rents out to large foreign companies that pay in foreign currency.

Other companies cater to Russian cus-

tomers with hard currency. Denvil Brown, who owns a Canadian Tire dealership in Ottawa, knows cars. But in Moscow, where there are now General Motors, Ford, and Chrysler dealerships, there is little expertise in the repair of foreign vehicles. Earlier this year, Brown entered into a joint venture with Russian partners who own an auto repair facility in Moscow, and next month he expects to begin offering a car repair service for customers with foreignmade cars—and foreign cash. Brown and his partners have already sunk more than $1 million into the project. Said Brown, who acknowledges that his venture is high-risk: “If we expect them to take this thing down the road, then they need assistance from other people. In capitalism, first you give, then you receive.”

We are here for the longterm’

For many investors, the best way to realize a return is to export raw materials for resale in international markets. That technique is favored by Canadian oil and gas companies which, so far, have invested about $250 million. Even relatively small companies, such as Wade’s Bitech, can make a profit by providing expertise and equipment to help the Russians extract and market badly needed energy resources. Although Wade has already spent more than a year establishing a joint venture that is not likely to begin production of oil and gas until late next year, he says that he is not discouraged. ‘There is nowhere else in the world where a small company like ours can gain access to undeveloped resources,” said Wade. “The potential here is enormous.”

But for almost every company searching for the pot of gold in Russia there is a seemingly endless series of pitfalls. John Howell, a specialist in Eastern Europe at international accounting firm Ernst & Young in London, says that conventional bank financing for Russian joint ventures is almost impossible to obtain. In fact, Howell says, because of the political instability, it is probable that more foreign capital has fled Russia in the last year than has gone in.

Skyrocketing costs and legal uncertainties have also frightened investors. One Canadian businessman, who requested anonymity, spent thousands of dollars renovating office space in Moscow, only to have it violently repossessed. “Just as we were installing the steel doors, security guards showed up and refused us access,” he said. “We were caught in a ferocious title dispute. Later we learned of the murder of one of the guards. We didn’t know if it was connected, but we decided to write it off and get out.”

According to Ottawa consultant Albinson, that vicious climate is not surprising, given the hardship that many Russians face on a daily basis. “It’s simple,” he explained. “If you can’t feed your family, you will do anything to get hard currency. It’s well past the stage of dog-eat-dog. Now, it’s the wild, wild east.”

At least one large Canadian company has decided to bow out, if only temporarily. In August, 1992, Bell Canada International Inc. of Montreal announced that it had entered a joint venture agreement with Moscow Local Telephone Co. to modernize the city’s failing network of analog telephones. But by May of this year, BCI and its Russian partners decided not to proceed, partly because of a lack of agreement over timing of the $150-million investment by BCI. “Of course we are disappointed,” said BCI spokesman Jean Paul Chartier. “The process is very slow.” With a desperate population fenced in by want, greed, and political uncertainty, it is little wonder that not everything works well in the former Soviet Union. It is only a wonder that anything works at all. 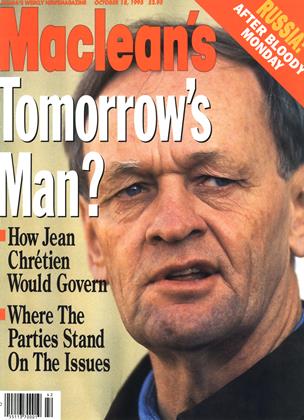