After a sip of tea and a well-timed pause, Boris Yeltsin set down his cup with a firm hand and declared in effect that he was suspending Russia’s fragile democracy in order to save it. With the nationally televised announcement that he was dissolving parliament and calling early elections for a new national assembly in December, the Russian president last week launched the biggest gamble of his stormy political career. Yeltsin had no authority to disband a legislature that has consistently blocked his efforts at economic reform and has at times tried to remove him from office. But even so, his seizure of power met with sympathetic understanding abroad and widespread—if muted—acceptance at home. His gambit left his opponents huddling in a legislature with their electricity, hot water and most telephone lines cut off by presidential order. In sharp contrast, a confident Yeltsin strolled around central Moscow in a campaignstyle walkabout. There, he scoffed at a motion in the legislature he no longer recognized that elevated Alexander Rutskoi, his estranged vice-president, to the presidency. “That’s just laughable,” he told a generally favorable crowd surrounding him.

Yeltsin made his theatrical appearance in a popular Moscow square that is dedicated to Russian national poet Alexander Pushkin—but is now as well known as the site of the city’s first McDonald’s restaurant. Against that backdrop of Western influence and Russian tradition, Yeltsin added some potent symbolism of his own: to make it clear to anyone who wondered where the military’s loyalty would fall,

he had National Defence Minister Gen. Pavel Grachev at his side. The top brass of the other so-called power ministries—police and security forces—also lined up publicly with Yeltsin. But that display of solidarity could not quite dispel a Russia-wide concern about the threat of civil war

as the populace watched the spectacle of two men claiming to be their president. That fear only deepened when Yeltsin’s legislative foes handed out automatic weapons to hundreds of supporters gathered at the parliament building. Warned the influential Moscow daily newspaper Nezavisimaya Gazeta (The Independent) : “The slightest provocation or irresponsible step by either side could lead to civil war.”

Moscow’s jittery calm was further strained when eight masked men attacked the military headquarters for the Commonwealth of Independent States, the loose alliance of republics that succeeded the Soviet Union. One policeman and an elderly woman died as Interior Ministry forces repulsed the attack on a building housing sophisticated communications systems. Speculation in some Moscow newspapers that the assault had been carried out by disgruntled officers

who see little future in a shrinking postSoviet army only fuelled worries about splits in the ranks. Then Yeltsin raised the stakes once again by deploying troops around the parliament and several thousand people gathered there to protest his actions.

Even before that tense confrontation, Yeltsin’s daring gamble had enveloped Russia in its most serious political crisis since a failed 1991 putsch by Communist hardliners that hastened the collapse of the

Soviet Union. But developments last week in the former Soviet republics—what Russians now refer to as “the near-abroad”—showed that other parts of the old empire have suffered even greater pain and dislocation while struggling to emerge from communism’s ruins. In Georgia, there was dramatic renewed fighting in a yearlong civil war that threatens to dismember the tiny, mountainous country (page 36). And a chaotic situation in Ukraine provided powerful ammunition for

supporters of Yeltsin’s drive for a fast transition to a market economy.

Economic reform has barely begun in what was the breadbasket of the old union. Ukrainian industry and agriculture are overwhelmingly state-controlled and subsidized, and hyperinflation rates of more than 50 per cent each month have wrecked the government’s attempts to establish a stable national currency. In the capital city of Kiev, as in Moscow, a conservativedominated legislature has repeatedly blocked economic restructuring programs submitted by Prime Minister Leonid Kuchma. But while Yeltsin seemed to be gaining the upper hand in his power struggle, conservatives with a continuing faith in a state-run economy have prevailed in Kiev. They have ignored Kuchma’s pleas for special powers to implement reform and rejected the former state industrialist’s repeated warnings that the country was on the brink of catastrophe. Last week, that dispute came to a head as a frustrated Kuchma, charging that Ukrainian President Leonid Kravchuk had given him only tepid support, had his resignation accepted by parliament. Yefim Zvyagilsky, a coal mining official and acknowledged conservative, took Kuchma’s place with no clear program for arresting Ukraine’s steep economic decline.

In Moscow, Yeltsin’s opponents were striving to depict the week’s events as a replay of the 1991 coup— with Yeltsin as the villain. There were indeed similarities. Once again the White House, the Russian parliament building on the banks of the Moscow River, was ringed by flag-waving demonstrators who quickly erected barriers against a feared Kremlinordered attack. But in the fine weather of Moscow’s Babye Leta (literally, old woman’s summer), the crowds were at

most only about one tenth the size of the 50,000-person gathering that formed in the cold and rain in August two years ago. And in 1991, the crowd included large numbers of young people, who had gathered at the White House to defend democracy. But in last week’s drama, the protesters were predominantly middle-aged or older—representatives of the dwindling numbers of Russians who still hold fast to the old faith and the red flag of Soviet communism. Their barriers of pipe and scrap lumber were flimsy—little more than symbolic declarations of defiance.

In another twist on the events of 1991, Vladislav Achalov, wearing green-and-brown camouflage fatigues and with a pistol strapped to his hip, was busy inside the White House. As an army general in 1991, Achalov was allegedly involved in plotting the failed hardliners’ coup. Now, he was supervising the distribution of automatic rifles and other weapons to volunteers who, he said, had come forward to help defend “this island of constitutionality.” Achalov’s involvement—and his appointment as the legislators’ choice to replace Grachev as defence minister—prompted some Muscovites to dismiss the rerun of history at the White House as merely a farce.

Away from the standoff at the building, there were few signs of a city gripped by cri-

On the streets and in subway trains, many Muscovites seemed oblivious to the fears of potential civil war that gripped some of their compatriots. They acknowledged that, while they were following developments, they have grown weary of the constant political turmoil. “It doesn’t affect me,” said Yevgeny Makarov, a 22-year-old engineering student who was waiting for a bus near Moscow State University.

“We’re never going back to the old system, but before we build a capitalist paradise here, life will probably get even tougher.”

Under Yeltsin’s administration, maintaining a comfortable living standard has become a struggle for most Russians: there are now more goods in the stores, but prices are high and wages have lagged behind monthly inflation rates that have risen above the 30per-cent mark. At the same time, the twoyear-old political wrangle in Moscow has weakened the central government and threatened to transform Russia into a loosened confederation as the country’s 89 regions exercise more local power and independence.

Looking ahead, there is no guarantee that the elections Yeltsin has called for December will produce a less combative legislature. Equally, Yeltsin cannot be sure of repeating his June, 1991, victory in the presidential elections that he now proposes to hold next June, two years before the expiry of his term. But after months filled with hints and hesitation, the 62-year-old leader is gambling everything on the belief that most Russians still support his leadership. □ 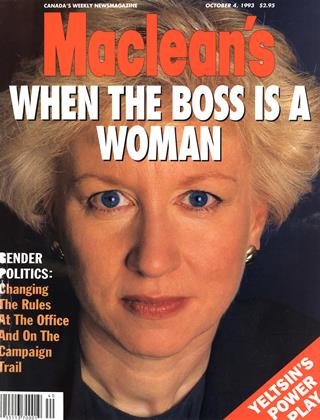