The moment will play forever. It will play whenever anyone shows World Series highlights, and it will play in the minds of millions of Canadians who saw it live at SkyDome or on television and knew they had just witnessed something very special. Joe Carter swings. The ball flashes off his bat. The crowd rises as one, sucking in a collective breath, disbelieving, then explodes as the sphere disappears over the leftfield fence. Carter, watching as he runs, springs into the air, bounding around the bases like a crazed kid, shouting up into the roof where fireworks burst on almost too-perfect cue, his teammates burying him at home plate in a multi-player pileup. The film isn’t grainy or in black-andwhite; the players don’t wear quaintly baggy pants. But make no mistake: what happened in Toronto late on the night of Oct. 23, 1993, making the Blue Jays World Series champions for the second year running, is one for the ages.

That is partly because of the way it happened. In a sport that loves its lore, Carter’s come-from-behind blast, completing a 4-2 Series triumph over the resilient Philadelphia Phillies, was only the second time that a Series had ended on a ninth-inning, gamewinning home run (the first, by Pittsburgh’s Bill Mazeroski, beat the New York Yankees in the seventh game in 1960). Then there is the magnitude of the accomplishment: repeating as champions (the 1978 Yankees were the last to do it) is the baseball equivalent of winning back-to-back Oscars, Nobel Prizes, provincial lotteries. And it is especially remarkable for an expansion team in just its 17th season—one that lost a dozen players from its Series-winning side of 1992. “I didn’t think it could get any better than last year,” said Jays’ president Paul Beeston as the celebrations wound down in the Jays’ clubhouse. “But it is—we’re very, very proud and we’ll savor this for quite awhile.” Just how special was it? Ask anyone in, say,

Seattle, whose team has never even appeared in the Series, or in Philadelphia, whose club has won it just once in 111 years. Or ask Jays’ fans from coast to coast, who succumbed once again to the game’s peculiar power to turn otherwise sane and sobre citizens into raving devotees waving styrofoam J’s, screaming at their TVs, taking the long, tortuous ride through post-season play.

From a partisan perspective, the opposition this year was harder to dislike. Rather than the dreaded Oakland A’s, whom the Jays vanquished in last year’s American League playoffs, Toronto won the 1993 pennant by whipping the Chicago White Sox, who are not even the most popular team in their own city. When it came to the World Series, there was no sign of last year’s National League opponent, the Atlanta Braves, with their chopping, chanting fans, their mega-rich owner Ted Turner and his wife, Jane Fonda, gazing heavenward for divine intervention. No, Atlanta had been burned by the upstart Phillies, an endearingly scruffy bunch variously called the Rat Pack, the Nasty Boys, the Broad Street Bellies and a prison softball team. Even Jays fans liked these characters. “We identify with them,” said Christine Buchanan, a 26-year-old bartender at a Toronto nightclub. ‘They’re, like, hosers.

They’re spittin’, beer-drinkin’, ball-playin’, crotch-grabbin’ kinda guys.” The Jays, meanwhile, had undergone a radical image change—which goes to show what World Series rings can do. “You don’t hear anything anymore about what the team didn’t do in the past,” Carter said outside the batting cage before Game 2. “We won last year, and that’s it.” In fact,

the American media had transformed them from the Blow Jays— widely ridiculed for not winning the big ones—into a club envied, even hated, for winning too much. They were called cocky, aristocratic, princely. But on the field, they proved they could get as down-and-dirty as the Phillies, especially in the bizarre, rain-soaked, run-filled Game 4 that swung momentum the Jays’ way—another one for the Series’ highlight film.

But it is the last image that will be remembered best. Even in the first electric minutes after Carter’s Game 6 homer, the fast-forward age had turned the footage into an instant classic. Over and over, it played on the SkyDome Jumbotron as thousands of fans stayed to savor the moment. They whooped, they exchanged high fives, they roared at the announcement of the Jays’ Paul Molitor as the Series’ Most Valuable Player. But it was Carter who had supplied the magic. The way they won, it was so dramatic,” said Todd Levy, a 32-year-old physician from Thornhill, Ont. “It might never happen again in our lifetime.” The real Joe Carter was making his way across the field, beaming but oddly diminished. The other Joe was still circling the bases, still jumping, jumping, a joy for all time. □ 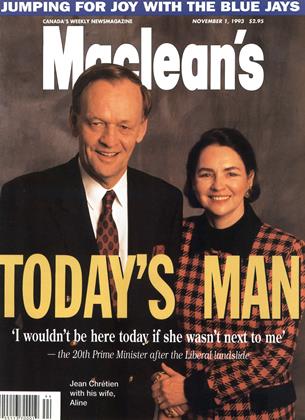