No one living in Moser River, N.S., ever remembers seeing tough, stocky Donald Findlay show a trace of fear. Yet the popular con-

on Oct. 1, part of his sentence for dangerous driving. Findlay, 37, did not relish being locked up— particularly in the same prison with career criminals with whom he had had repeated confrontations. His concerns turned out to be justified: about two hours after entering the prison, the father of three was found beaten and near death; he died an hour later in hospital. And last week, the RCMP charged a 20-year-old local man with first-degree murder—the first death to re-

sult from an ongoing reign

of terror, residents say. “It was inevitable,” declares Jack Stewart, 44, the village milkman and a friend of Findlay’s. “Sooner or later someone was going to get killed.”

Set amidst the wooded headlands and deep bays of Nova Scotia’s eastern shore, Moser Fdver hardly looks like a community under siege. But last week, the tension was nearly palpable in the tiny hamlet 150 km east of Halifax. Since Findlay’s death, angiy townspeople at emotion-packed public meetings have repeatedly told politicians and

RCMP officers about living in constant fear of being robbed, vandalized and assaulted. And the RCMP acknowledges that the area has experienced an increase in crime in recent years. A single thread runs through residents’ anguished tales: how a small group of young hoodlums rules their once-sleepy

community of about 300 by intimidation. One elderly woman, whose car was vandalized and who insisted on anonymity, declares: “It is like a nightmare—except you never wake up.”

The nightmare is a recurring one. Now in their 20s, most of the dozen-orso men believed to be behind the bulk of the crimes grew up in the economically depressed region, says Sgt. Ian Drummond, head of the RCMP’s Sheet Harbour detachment. As they have grown older, he adds,

they have graduated from mere troublemakers to “a loosely knit group of career criminals.” And in Moser River—which is without a full-time RCMP officer and is populated by many senior citizens—they have easy pickings. Homes, businesses, offices—even the local Baptist Church—are frequently burglarized and vandalized, the Mounties say. Automobile windshields and roofs have been smashed and tires and gasoline stolen. Townspeople have complained about being harassed in the streets by drunks. Some parents refuse to send their children to the store without an adult escort.

On and on it goes. Last year, a woman awoke one night to find thieves stealing her VCR before she chased them off at gunpoint. Meanwhile, the windows of the local credit union were shot out and a parked car was firebombed. Jim Alley, the minister at the Moser River Baptist Church, had an even closer call last fall when a young man pulled a knife on him on the highway near his church. With sizable understatement, Alley says: “At times this town seems lawless.”

The citizens of Moser River complain of too little police protection—and a justice system that is too lenient on criminals. In truth, though, many Moser River residents are simply too intimidated to report many crimes. And anyone who stands up to the hoodlums risks trouble, townspeople say. Last year, Anthony Turner, a 40-year-old contractor, went to the aid of his brother-in-law, who had been surrounded by four men wielding hockey sticks. In the scuffle that followed, Turner was hit in the mouth and on the back of the head, requiring 28 stitches. Three men were jailed and one received probation in connection with the incident. Declares Dean Naugler, 50, a local schoolbus driver who was involved in a confrontation with the same group, “They want to take over the whole county.”

Donald Findlay tested their resolve a number of times. “He wasn’t scared to take them on,” recalls his father, Neil. One night about two years ago, a passing car sprayed Donald Findlay’s house with bullets, his father says. No one was ever charged in the incident. Some time later, Donald’s truck collided with the group’s car—and Findlay found himself in court. Convicted of dangerous driving, he lost his licence and was sentenced to 14 days in jail—to be served on weekends—starting on Oct. 1,1993.

The Halifax Correctional Centre conducted an internal review into Findlay’s murder and concluded that its staff followed correct procedures. But Neil Findlay says the institution should have protected his son. The man charged in the crime was Wade Fleet, a 20year-old prisoner already serving 18 months for several offences. Ultimately, the question of the prison’s culpability may be decided by an independent investigator empowered by the Nova Scotia government to review the jail’s procedures. Meanwhile, Findlay’s family has retained a lawyer to seek compensation from the provincial government for his death.

Already, the tragedy has changed his home town. The RCMP is considering putting a full-time officer in the village. And, perhaps most importantly, Findlay’s death has left the townspeople united in their determination to finally take back control of their community. Says Naugler: “Maybe this will be a turning point.” 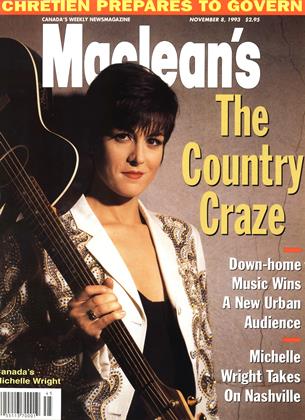