Breaking with the NDP

Breaking with the NDP 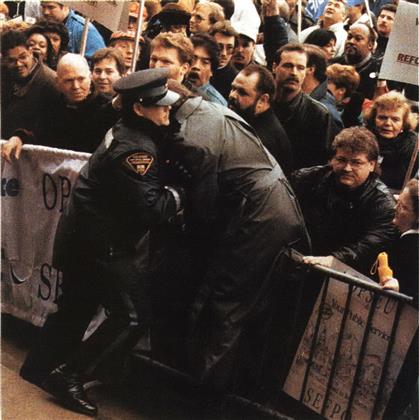 Unionists at legislature: 'This cripples the NDP'

As a veteran of demonstrations against the Vietnam War in the late 1960s, it was the kind of guerrilla tactic that Ontario NDP Premier Bob Rae might once have appreciated. At the end of an otherwise peaceful protest outside the Ontario legislature last week, angry members of the Ontario Federation of Labor (OFL) broke through a police barricade and began hammering on the oak-panelled doors of the building. ‘We want Rae!” they shouted, as a swirling battery of TV cameras recorded the event. We want Rae!”

Rae was not in the legislature at the time.

But the first socialist premier of Canada’s most populous province had already flatly rejected the demand that brought about 800 labor activists to his doorstep.

Two days earlier, delegates to the annual convention of the OFL, which represents about 800,000 workers, had voted to cut all ties with the provincial NDP unless it rescinds Bill 48, its so-called social contract legislation.

That bill, passed in August, outraged labor leaders by freezing wages, forcing workers to take unpaid leave and otherwise breaching existing contracts. The OFL’s motion of censure was far from unanimous: about a third of the 1,500 delegates, most of them from private-sector unions, boycotted the vote, arguing that, for all its faults, the NDP remains labor’s logical political home. Still, the fact that so many of the people who helped to put Rae into power three years ago are now prepared to help bring him down bodes ill for the beleaguered premier. Observes Brian Tanguay, a political scientist at Waterloo’s Wilfrid Laurier University: “This really cripples the NDP at a time when it can least afford it.”

Rae’s government has staggered from one crisis to another almost from the moment of its surprise election victory in September, 1990. The NDP quickly earned the scorn of both the business community and key elements of the party faithful. The former viewed with alarm a provincial deficit that more than tripled to $10 billion in a single year; the latter watched in dismay as Rae abandoned several initiatives he had championed in opposition. Then, last spring, in a desperate bid to contain the deficit, Rae announced plans to trim $2 billion from the government’s payroll over each of the next three years. But even that move failed to appease his business critics: two international lending agencies last week cut Ontario’s credit rating for the third time in as many years.

Following their rebuke last week, Rae expressed the hope that his former labor supporters will eventually realize that the province’s fiscal situation forced his hand on Bill 48. In an ironic twist, he also used a speech to a business audience to appeal for support in the election that he must call by 1995. Noting that his government has entered into several joint ventures with the private sector, Rae said: “I hope you all remember this in 18 months’ time.”

The premier may be indulging in wishful thinking. Tanguay points out that when NDP governments in British Columbia in the 1970s and Saskatchewan in the early 1980s introduced legislation that alienated labor, they failed to gain enough support from other voters to win re-election. At the same time, some Ontario labor leaders are already looking beyond the life of the Rae government. Observes Sid Ryan, Ontario president of the Canadian Union of Public Employees: “We may have to wait until the electorate passes judgment on Bob Rae—and whatever is left behind of the party, we’ll have to rebuild all over again.”