The signs of human misery are everywhere. There is no running water or sewage disposal—and many of the village’s tiny ramshackle homes, some of which house as many as 20 people, lack proper heating. Packs of wild dogs run free and have attacked children who are left unattended by parents who are often too drunk to care. Many of those same children suffer from tuberculosis and skin infections caused by poor hygiene. Worse still, local health workers estimate that as many as 25 per cent of the town’s 500 residents have attempted suicide. And it was one of those attempts—when five girls and a boy aged between 12 and 14 tried to kill themselves by sniffing gasoline fumes on Jan. 26—that brought government officials from Ottawa and St. John’s to Davis Inlet, a desolate Innu community on an island off the northeastern coast of Labrador. Their mission: to discuss the future of the community and treatment for the six youths with Innu leaders.

The isolated settlement has long been a ghetto of poverty and despair. But as reports of the gas-sniffing spread, Davis Inlet, in all of its pathetic squalor, became a graphic symbol of an intractable Canadian tragedy: the seeming inability of governments to provide natives in remote communities with a healthy, prosperous existence. For her part, Davis Inlet Chief Katie Rich says that many of the Innu’s problems could be solved if Ottawa and the Newfoundland government allowed the community

to relocate to its traditional hunting grounds near the Sango River on the mainland, seven kilometres west of the island. But, according to Indian and Northern Affairs Minister Thomas Siddon, “That will take a few more years of negotiation and analysis.”

The Innu, a subarctic native people, are used to waiting. For 6,000 years, Innu hunters and their families tracked the caribou across the frozen interior of Labrador. With the coming of the fur trade in the 17th century, nomadic tribes began settling near trading posts such as Old Davis Inlet on the Sango River. By the time the fur trade died out in the 1940s, many of the Innu, who had abandoned their traditional subsistence culture, were starving. In 1948, the Newfoundland govern-

ment moved some of the Innu 400 km north from Old Davis Inlet, in search of better hunting grounds, but many of them returned. Finally, in 1967—Canada’s centennial year— the Innu of Old Davis Inlet were moved to Iluikoyak Island and the new community of Davis Inlet, in part to foster a local cod-fishing industry. Said Rich: “When we moved here, we were promised water and sewage treatment, but we never got it.”

In fact, Ottawa and Newfoundland, which share responsibility for the Innu people under the terms of Newfoundland’s entry into Confederation, agreed two years ago to spend $4 million on a water and sewage system and a new health clinic. But the project was shelved after Innu leaders proposed moving the community to the mainland. In 1990-1991, the most recent year for which figures are available, the two levels of government spent a total of $2.8 million, or $5,600 per person, on services such as education and housing in Davis Inlet.

Like many native people in remote communities across Canada, the residents of Davis Inlet appear to doubt that change for the better will ever come. Indeed, five days after native Const. Simeon Jacobish discovered the attempted suicides, he found another five children, aged between 8 and 12, sniffing gasoline under a house. “Suicide is the major problem I deal with,” Jacobish said. “I see no hope here, but a treatment centre would help.” Added Karen Isaac, a policy analyst for the Assembly of First Nations: “They are a nomadic people and they have been put on an island. It has taken away their spirit.”

When the federal and Newfoundland officials arrived in Davis Inlet at week’s end to consider the problem, the Innu showed their determination to press ahead. Native leaders met with the bureaucrats in a large tent set among the stunted trees of the northern forest—a traditional setting that band members said was meant to symbolize their traditional way of life. Said Isaac: “They have started something here, but in order for it to grow into something beyond just surviving, they have to go to Sango.”

When the meeting ended, Innu leaders asked government officials to send the children with the worst gasoline-sniffing addictions, along with their families and interpreters, to the Poundmaker/Nechi Centre, a native addiction treatment clinic near Edmonton. They also asked the governments to establish a new treatment centre for natives in Labrador, and to finance the training of a community resource team that would deal with local crises. Said Innu Nation President Peter Penashue: “Our approach is to not only deal with the kids, but also to deal with the community. It’s a holistic approach, not a Band-Aid solution.” For many residents of Davis Inlet, that solution cannot come too soon. 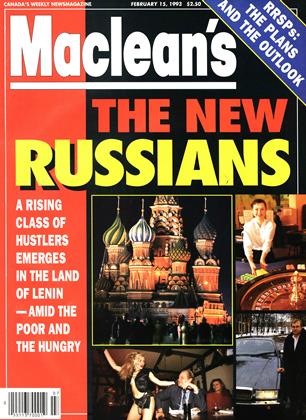