As they prepare for the next Winter Olympics in Lillehammer, Norway, young skaters may be hearing echoes of another era, strains from the hauntingly seductive opera Carmen. That was the music to which German skater Katarina Witt performed a flawless, gold-medal-winning routine at the Calgary Games in 1988. A year later, as a four-time world champion and double Olympic gold-medalist, the sultry queen of figure skating retired from amateur competition. Since then, Witt has made a handsome living as a professional, performing in ice shows in Europe and North America. But now, under a new International Skating Union (ISU) rule, she and others have won reinstatement as amateurs to compete at the next Olympiad.

The ISU agreed last June to allow pros a onetime chance to resume their amateur status. Three reinstated ice dancers will be competing for the United States this week at the World Championships in Prague: Renee Roca, Susie Wynne and Gorsha Sur. Others who have either declared, or are rumored to be considering, an Olympic comeback include American Brian Boitano, the 1988 Olympic champion, Ukrainian Viktor Petrenko, last year’s Olympic and world champion, and Russian ice dancers Sergei Ponomarenko and Marina Klimova. Tracy Wilson, a Canadian ice dancer who won bronze in Calgary, says that the new rule will increase the intensity of competition. “This is going to be

the most incredible Olympics,” declared Wilson, now a CBS skating analyst. “It’s going to be so exciting—and the winner will be the best of the best.”

Not everyone is so enthused. Some skating officials express concerns that returning pros could bump hard-training young skaters from national teams, undermining morale in amateur programs. And ISU secretary general Beat Häsler cautions that many pros may not be up to Olympic calibre. “When they are competing, skaters practice four-to-five hours a day,” said Häsler. “Once they’re finished, it’s more like two-to-three hours a week—you can see it in the shows.” Even the 27-year-old Witt, he said, may have trouble winning a spot on the powerful German team. “She

Some former stars, like Canadians Brian Orser and Elizabeth Manley, who both won Olympic silver in 1988, say they are unlikely to attempt a comeback. “I have a mortgage, I have a car payment, I have a normal life now,” said Manley, as she toured with an ice show in Western Canada. ‘To give up my income would be very hard.” She added, “Everybody has such a wonderful memory of me in Calgary.” That memory would be tarnished if she tried, and failed, to repeat a medalwinning performance—a risk that any returning star will have to take. 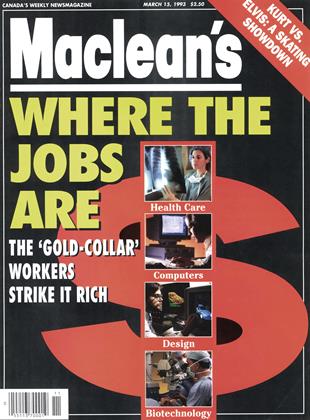