First there was The Vanishing, director George Sluizer’s Hollywood version of his own 1988 Dutch thriller.

Then, the 1982 French movie The Return of Martin Guerre revisited U.S. theatres as Sommersby, a languid Richard Gere-Jodie Foster vehicle.

POINT OF NO RETURN Directed by John Badham

Maggie (Bridget Fonda) has been a bad girl. A sociopathic drug addict with jailhouse tattoos and bad teeth, she shoots a policeman during a bungled drugstore robbery and is sentenced to death. But she gets a second chance when a secret U.S. government agency fakes her execution and enlists her as a trainee. Under the tutelage of the enigmatic Bob (Gabriel Byrne), who gives her a new wardrobe, a new identity and some dental work, Maggie blossoms into a sophisticated woman. This is no My Fair Lady, however: Bob is grooming his charge to become a professional assassin. Armed with a big gun

and a killer miniskirt, Maggie travels around the United States murdering people for Bob’s organization. But when she falls for a wimpy photographer (Dermot Mulroney) and begins to feel bad about killing, she finds assassination a difficult business to leave behind.

Like its predecessor, Point of No Return suffers from a tedious love story and dimestore psychologizing. Still, it is naughtily entertaining, thanks largely to fast-paced violence and to strong performances from Byrne and Harvey Keitel in a small but darkly funny role as Victor the Cleaner. And although Fonda has some trouble expressing the emotional conflicts of a reluctant assassin, it is refreshing to see a woman in a Hollywood movie doing more than screaming and getting killed. As Maggie, Fonda gives as good as she gets.

Perhaps that is Point of No Return's strength: it has the feel and smart-aleck attitude of a new-wave French film. In fact, except for the actors, the locations and the lack of subtitles, in the important aspects it is a new-wave French film—namely, Nikita, with which it shares plot, characters and even, at times, individual shots. At least director Badham had the good sense to faithfully reproduce an entertaining movie. 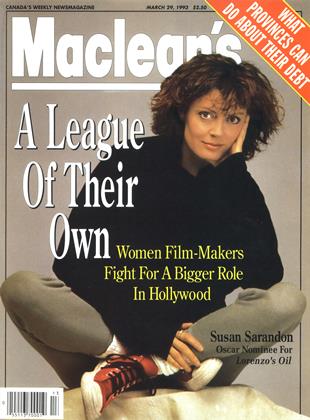