Brian Mulroney has been a gutsy Prime Minister who deserves plaudits for the legacies he will leave behind. Under his captaincy, the ship of state is in better shape than when he first took command. Back in September, 1984. the vessel was listing and off course. Mulroney and his party avoided the shoals, jettisoned excess cargo and navigated us in the right direction.

Of course, critics will say that the economy is not in great shape and that it is Mulroney’s fault. But there are reasons beyond the control of this government for the negative news these days. Unemployment plagues every industrialized country because of massive global restructuring. Besides, economic policy is not a problem in Canada any more, thanks to Mulroney’s government. Excessive social spending is.

Like other leaders, Mulroney was undone by the very traits that got him to the top. His courage and willingness to take a gamble against all odds helped him become Prime Minister for two terms. But risk-taking and decisiveness made him unpopular. Not overly confident, he sometimes came across as cocky, which gave him an image problem.

But history will remember Mulroney as having the courage to bring about many needed reforms, the most important of which was the controversial Free Trade Agreement (FTA)—a deal that gives this country an enviable opportunity to sell freely into the world’s richest marketplace. The figures prove its wisdom: sales to the United States were $157.5 billion in 1992, up from $97.8 billion in 1989, an increase of 62 per cent. That climb is unmatched by any G-7 nation.

Meanwhile, here at home, partisans claim that the net loss of 130,000 jobs was caused mainly because of free trade. But the Canadian Manufacturing Association estimates that the lion’s share of job declines was caused by low commodities prices, the U.S. and Canadian recession, a higher

Canadian dollar and poor sales by the Big Three American automakers. And the pain is spread worldwide. California, with an economy slightly larger than Canada’s, has lost about 700,000 jobs since the 1989 FTA came into effect.

Unemployment figures are also misleading in Canada. Much unemployment here is not due to bad economic policy but due to bad social policy. People can quit jobs and get benefits. Welfare is too open-ended. Immigration, whether it’s the sudden deluge of so-called political refugees or sponsored relatives, has increased unemployment by letting in hundreds of thousands of people lacking required skills. Many languish on assistance. The Tories have reforms to address some of those problems before the House of Commons. Other parties won’t touch the issues.

Not surprisingly, in 1985 foreigners withdrew $3 billion in direct investments from Canada.

The Tories slashed the budget and, in hindsight, should have cut more. But, faced with cries of outrage from seniors and other special-interest groups, they took the middle road, keeping the deficit below the increase in the size of the economy. Still, the debt grew by about $200 billion during their eight years, less than the interest paid on debts they inherited. They did that by becoming the most fiscally responsible administration in the country, averaging governmental spending increases of 3.7 per cent per year, from 1984 until 1992, compared with provincial averages of 7.2 per cent.

Besides a fiscal mess, Mulroney inherited a rotten relationship with the Americans and with Alberta. Through unfair trade practices and government edict, the Liberals had alienated many sectors and politicians in our biggest customer-nation. There were also discriminatory taxes and confiscation provisions in the National Energy Program. But Mulroney immediately set about to restore good relations with both.

Next came a flurry of important reforms that have made our economy more efficient and more equitable: oil-price decontrol, the creation of an effective Competitions Act for the first time in our history, imposition of tougher financial institution regulations and improved government procurement policies. Mulroney also declared Canada open for business by scrapping the damaging Foreign Investment Review Agency and by inviting in rich entrepreneurial immigrants. The result was a turnaround from a net foreign investment decline in 1985 of $3 billion to a total year-to-year increase of $29 billion from 1986 to the third quarter of 1992. Foreign direct investment represents job creation, which wasn’t occurring under the anti-trade, anti-American and anti-foreign investment policies of old.

Mulroney’s fate was probably sealed when he replaced the hidden manufacturers’ sales tax, which punished manufacturers, with the high-profile Goods and Services Tax. Such a tax was political suicide for anyone, but the GST is an important reform, if only to remind spoiled Canadians daily that there is no free lunch. “Everyone knows you’re going to get nailed with a tax like that,” he told me months later in an interview.

Undaunted, he plunged into two doomed constitutional rounds. His first, Meech Lake, was sabotaged, then voters soundly rejected last year’s constitutional referendum. But it was vintage Mulroney: a referendum contest that most politicians would avoid. Like the 1988 election, a de facto referendum on free trade, Mulroney didn’t shy away from risks. And by asking approval from the people directly, he reversed the high-handedness that characterized his predecessors with their elitist policies. But as any bettor knows, it was only a matter of time before Brian Mulroney, the middle-class boy with brass from Baie-Comeau, would roll the dice on his career and lose. 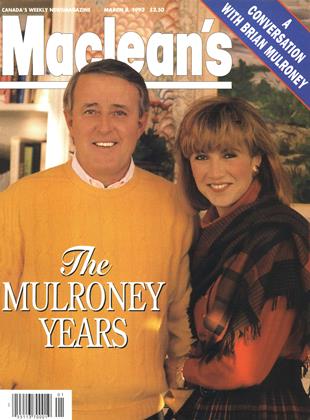