Walking down the fairway of the par-3 12th hole during a practice round at Augusta National Golf Club last week, Richard Zokol paused by the stone bridge that crosses Rae’s Creek. The 12th is a dangerous beauty, its pastoral backdrop of flowering azaleas and foreground of slow-moving water framing a treacherously small green. During the Masters golf tournament, played each spring in Augusta,

Ga., many would-be champions have come to grief on the 12th—in 1980, Tom Weiskopf needed 13 strokes to complete it.

Others—notably, Fred Couples last year—have escaped disaster and gone on to win. Zokol, an intense Vancouverite, is keenly aware of the history of the place. Even for someone who has spent 12 years on the PGA Tour, it is difficult to stay aloof in the presence of Augusta, a sultry southern heartbreaker that tantalizes many but rewards only a select few. “Playing the Masters was a childhood dream of mine,” he said as he crossed the bridge to the green. “This place is better than I imagined.”

Zokol’s dream comes true this week when the 1993 Masters gets under way. On Thursday, weather permitting, the 34-year-old will be called to the first tee to begin play on the fabled course that Scotsman Alister Mackenzie designed in 1931. Hitting that initial drive will not be easy. Hardened veterans, hearing their names called at Augusta each year, admit to butterflies as big as the local mockingbirds. They stand in the footsteps of modem golf’s greatest players, from Augusta’s builder, Bobby Jones, through Ben Hogan and Byron Nelson to such contemporary stars as Jack Nicklaus, Nick Faldo and Seve Ballesteros. “I know my emotions are going to be trying to go out of control,” Zokol admitted while eating lunch on the grass terrace that overlooks the ninth and 18th greens. But facing that pressure, Zokol in-

sisted, is the whole point of playing the Tour. “The Masters is what if s all about,” he said. “It’s what gets us out of bed in the morning.” For golf fans with prized tickets, Masters week is like a chance to walk among the royals. It also enables them to visit an intensely private retreat, its elite membership

ordinarily cloaked behind high hedges. The 300 club members have staged the Masters since 1934 as the first of golfs four “majors,” a quartet that includes the U.S. and British opens, and the PGA Championship. But the Masters, unique among the majors, is always played at the same course and always regarded with a unique reverence. “The first Australian to win the U.S. Masters will be a god back home,” suggested Craig Perry, the diminutive Aussie who led in 1992 after the third round, only to fade in the final 18.

The club sits on 365 acres alongside Washington Road, an otherwise commercial thoroughfare that is choked with motels, dry cleaners and fast-food restaurants. But the

city of 45,000 disappears as soon as visitors turn onto the club property. Once past the guardhouse, Magnolia Lane—so-called for its dense canopy of magnolia trees—is filled with the sound of birds, and the occasional thwack of golf balls being hit on the adjacent practice ranges. The lane leads to the elegant clubhouse with its sprawling verandas that overlook the lush course. Unlike so many modern golf club developers, whose clubhouses are monuments to excess, Jones and partner Clifford Roberts chose simply to convert the home that was on the site when the property was purchased.

For all the international exposure from the tournament, the club itself remains an enigma. Historically, members have been captains of industry, or otherwise well-connected. (Zokol played his first-ever round there last December as a guest of Montrealer

David Culver, the retired chief executive of Alcan Aluminium Ltd.). In the early 1950s, a group of Augusta members known as The Gang launched the political career of their playing partner, Dwight Eisenhower. Eisenhower was an active member whose name adorns a guest cabin behind the 18th green—during his two terms as U.S. president, it became known as the Little White House. And a tree on the 17th hole became the Eisenhower pine—it pinched the left side of the fairway and often intercepted the president’s drives.

The club has encountered inconveniences of its own. Its critics note that it has no women members, although many women play the course as guests. And the only black member was ushered in quickly after the PGA decided in 1990 that it would not stage tournaments at clubs that refused membership on the basis of race. That exclusionary history, as much as anything else, was responsible for the International Olympic Committee’s decision last year to deny Atlanta’s bid to include golf at Augusta in the 1996 Olympics.

But no one can deny the course’s beauty, even when it is clogged with TV towers and thousands of fans attending the Masters. Mackenzie gave Augusta wide fairways, adding difficulty around the undulating greens. There are no simple putts, and routine two-putts can easily become three—especially during the tournament, when the already-fast greens are cut extremely short. Dan Halldorson of Winnipeg became embarrassingly aware of that in 1981 when he nudged a three-foot, downhill putt on the ninth that missed the hole and rolled 30 yards off the front of the green. Augusta has no gimmicky railway ties, no island greens, not even any rough. “This course doesn’t need to be tricked up,” said club professional Bob Kletcke.

The rollcall of Masters champions is a who’s who of international golf. “No lightweights win here,” Kletcke observed. In the 56 Masters played prior to this week (the tournament was not played in the last three years of the Second World War), the players who have won it more than once include

Eighteen months ago, Zokol seemed no closer to getting to the Masters than he had been upon graduation from Utah’s Brigham Young University in 1981. The man who as a rookie pro earned the unfortunate nickname Disco Dick for wearing a portable headset to aid his concentration won $78,426 in 1991— not enough to retain his Tour playing rights. “I got desperate,” he recalled. “I mean, I had a wife and three children.” He regained his playing card that winter at the gruelling Qualifying School and, gradually, his game began to come around. After a pair of top-20 finishes early in 1992, Zokol broke through during Masters week last year when he won the Deposit Guarantee Classic in Hattiesburg, Miss., an unofficial Tour event.

Then, in September, he won the Greater Milwaukee Open—and qualified for the Masters. That win, combined with his strong play at the 1992 U.S. Open at Pebble Beach, Calif., gave Zokol the confidence to play with the game’s best. “The Masters can’t be any worse than what it felt like teeing off on Sunday at Pebble Beach last year, and being in contention,” he recalled. “I mean, I was alive, intoxicated, in an altered state.” And, over lunch at Augusta, he seemed philosophical. “I might come in here and play horribly, but it will still be a wonderful experience. When I’m an old man, I’ll remember this day. It’s the first time I’ve ever had lunch on this patio at Augusta. I’ll never forget it.” Zokol, of course, is not the first Canadian to play the Masters.

Among others, London, Ont.’s Sandy Somerville, the six-time Canadian Amateur champion, was invited to the inaugural event in 1934, where he recorded the tournament’s first-ever hole in one. Stan Leonard of Vancouver tied for fourth in 1959, and George Knudson of Winnipeg tied for second in 1969. Zokol will wear a small maple leaf on his visor all week. “I won the Masters a hundred times as a kid,” he said. “I’d stand over putts and tell my friends, This to win the Masters.’ Then the putt would drop and I’d whoop it up.” But he wishes that there was a Cana-

dian event that kids dreamed of. “I think it would be great if, some day, kids stood over putts and pretended to be winning the CPGA championship.”

than to join the elite group of Masters winners this week, Zokol has kept his expectations modest. “Don’t get me wrong, I want to win this tournament,” he said, “but realistically, I want to come in this year and lay down a foundation for the years to come. I want to get to know this golf course.” Still,

Zokol’s compact, controlled swing produces a low draw, the kind of shot that stays under the wind and suits the predominantly rightto-left layout of the course. During a practice round two weeks ago, Zokol curled his tee

shot on the tough 485-yard, par-4 10th perfectly around the dogleg, hit a four iron to within five feet of the pin—and calmly rolled his putt in for a birdie. But playing well in practice is easy, he said. “I’m sure that during the tournament, there are times when it takes great strength of character to not be turned into a babbling idiot by a two-foot putt.”

Playing golf for a living can be cruel, on the psyche and on the pocketbook. Only about half the players in any PGA tournament actually make any money. Over the years, Zokol said, he has come to understand his professional strengths and weaknesses. “I feel that my biggest asset is not my game, although I have a good game,” he said. “It’s my attitude, and the way I manage my life and my opportunities.” This week, he will put that management to one of his sport’s sternest tests. But he leaves the impression that, while Disco Dick may have wilted un-

der the pressure, the new and improved Richard Zokol will thrive in the ratified air of Augusta. 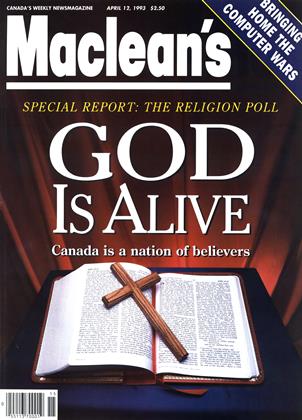