1 ston sits in his cab in front of a downPittsburgh hotel. Waiting for a fare, he has a perfect view of a 10-storey-high mural, painted on the side of an office tower, that depicts Pittsburgh’s most renowned sports stars. From baseball, there are forYner Pirates Roberto Clemente and Bill Mazeroski; from football, ex-Steelers “Mean” Joe Greene and Jack Lambert. The fifth is from hockey: the Penguins’ Mario Lemieux. “He’s the greatest hockey player ever,” Aston tells a visitor, “and maybe the greatest athlete ever. ”

Overhearing Aston, fellow driver Randy Barrett jumps out of a nearby cab. “No way Lemieux’s the greatest athlete ever,” Barrett snaps. “A great athlete is a versatile player, like a Bo Jackson or a Deion Sanders, who can play more than one sport. Lemieux wouldn’t last 15 minutes on a football field.” But Aston has the last word: “So, those guys wouldn’t last 15 minutes on the ice. And whoever led any league after missing a quarter of the season with cancer? That’s like someone hitting 50 home runs in 90 games. Anyway, the Penguins are winners, and we like winners in Pittsburgh.”

In a sport known for blinding speed and frequent violence, Mario Lemieux is all flamboyance and mystery. Game after game, the towering centreman makes dazzling plays that leave fans, teammates and opponents asking the same question: How did he do that? Off the ice, Lemieux is a diferent person: quiet, private, unassuming. And he remained that way even as he led the Penguins to the National Hockey League’s best regular-season record this year—and seized the scoring crown despite missing 23 games for treatment of Hodgkin’s disease, a cancer of the lymphatic system. In early April, after Pittsburgh tied the NHL record for consecutive wins— 15—with a victory over the vaunted Montreal Canadiens, the Penguin players were in a celebratory mood. But Lemieux spent nearly an hour in the trainer’s room having his standard post-game back massage. When he emerged, many of his teammates had departed. With typical reserve, Lemieux assessed the Penguins’ latest achievement: “It’s nice to tie a record by beating a team vith so much history behind it.”

This spring, the once-woeful Penguins

have an opportunity to earn their own distinguished place in hockey history. If they can win a third straight Stanley Cup, the Penguins would enter the pantheon of modern hockey dynasties, joining several Montreal Canadiens and Toronto Maple Leaf teams, and the Edmonton Oilers and

New York Islanders of the 1980s. Even without another Cup, Lemieux is in the midst of a remarkable year. After the discovery of a malignant node in his neck in early January, he returned to the Penguins lineup on March 2—less than 12 hours after completing his final radiation treatment—and went on a scoring rampage that propelled him past Pat Lafontaine of the Buffalo Sabres in the scoring race. Off the ice, Lemieux and his longtime, live-in companion, Nathalie Asselin,

are expecting their first child at the end of this month. And in June, Lemieux and Asselin will be married at a church in their home town of Montreal.

Lemieux, however, has not publicly announced the exact date or precise location of his wedding. For the man who eclipsed

Wayne Gretzky as hockey’s premier performer, fame is as much a burden as a blessing. Young, handsome and gifted, Lemieux has done endorsements for such products as Snickers chocolate bars and Koho hockey sticks. But he has never sought the celebrity status of a Gretzky or a Michael Jordan. Once a game is over, or the season ends, he prefers the peace of his home. “I like to relax, watch television and keep busy around the house,” he said.

But after winning three scoring titles in

five years, Lemieux found that fans were increasingly disrupting his tranquility. So, late last year, he and Asselin moved from the affluent Pittsburgh neighborhood of Mount Lebanon to the small, quiet town of Sewickley, 35 km west of the city on the banks of the Ohio River. “Everyone knew where he lived in Mount Lebanon,” said Tom McMillan, editor of the biweekly newspaper Penguins Report. “He’d come out to water the flowers or walk the dog, and he’d have to sign a dozen autographs.”

Lemieux’s path to Pittsburgh began in Montreal, g where he grew up in the | working-class district of Ville £

Guy Lemieux and his wife, g Pierrette, young Mario was selected first overall in the June, 1984, draft of overage junior hockey players. But he was reluctant to join the Penguins and refused to put on a team sweater for the traditional post-draft photos. Eventually signing, he had problems adjusting to life away from his familiar French-Canadian surroundings. “He was very quiet and very shy,” recalled Nancy Mathews, Lemieux’s landlady during his first season with Pittsburgh. ‘The language problem was very difficult for him.”

On the ice, however, Lemieux quickly emerged as one of the NHL’S most potent offensive forces. It was as a member of Team Canada in 1987, he says, that he reached a turning point in his personal development. Practising and playing with the world’s best during the Canada Cup tournament, he says, was an inspiring experience. He went on to win two straight NHL scoring championships and, along the way, formed an attachment to Pittsburgh.

Needless to say, the other Penguins enjoy playing with Lemieux, as well.

Left-winger Kevin Stevens says that Lemieux scores big goals when his team needs them most, a trait that separates the great

“We used to ask ourselves, ‘How can this team last?’ The whole atmosphere is different now, and it’s all due to Mario.”

players from the good ones. Forward Rick Tocchet adds that Lemieux intimidates opponents with his unparalleled abilities. “He puts a fear of embarrassment in the other team,” said Tocchet.

For many veteran observers of the NHL, Lemieux has fulfilled his potential as both an athlete and a franchise player. Dick Irvin, a Canadiens play-by-play broadcaster, has visited Pittsburgh annually since the early 1970s and remembers the state of hockey before Lemieux arrived. “We used to leave here for the last time every season,” he said, “and we’d wonder whether we were going to be back the following winter. The rink was only half full. There was no publicity. The media coverage was sparse. We used to ask ourselves, ‘How can this team last?’ The whole atmosphere is different now, and it’s all due to Mario.”

Although Lemieux rarely reveals much of his character publicly, he has earned widespread admiration for his courage under adversity. Two years ago, he sat out the first 54 games of the regular season recuperating from back surgery and a related infection—only to return and lead the Pen-

guins to their first Stanley Cup. This yearJ he was on track to break Gretzky’s single« season scoring record of 215 points when, ini January, doctors discovered that he had Hodgkin’s disease. The early diagnosis, and prompt treatment, left Lemieux with an excellent chance for total cure.

Since then, the Penguin star has received get-well messages from people all over the world. Mathews, who now sorts his mail and helps prepare responses, said that on four occasions since January she has loaded the trunk and backseat of her car with bags of mail for Lemieux. “He’s handled himself exceptionally well for all he’s gone through,” she said. “It’s hard to find the words to tell you how I feel about Mario Lemieux.”

Outside the rink, the Penguin faithful rarely catch a glimpse of Lemieux, who likes to spend his off-hours at home or on the golf course. During the off-season, he plays golf almost every day—he is a one handicap, he says. He and goaltender Tom Barrasso, his closest friend on the Penguins, both belong to an exclusive club outside Pittsburgh. And they live near each other, Lemieux and his fiancée in a threestorey, 15,000-square foot home with five fireplaces, 13-foot ceilings and exquisite woodwork. Built in 1913, the house went on the market last year at an asking price of $2.2 million.“If s a very stunning home,” said Barrasso. “They don’t build houses like it anymore.” No, and as fans everywhere have discovered, they don’t make many hockey players like Lemieux. 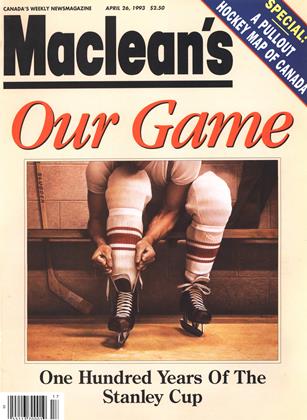