David C. (See-Chai) Lam, 69, became the nation’s first Chinese-Canadian lieutenant-governor in 1988. Born in Hong Kong, he immigrated to Vancouver 26 years ago and, as a major real estate investor, helped shape the city’s skyline. Lam, appointed a member of the Order of Canada in 1988, is known for his philanthropy. At his official residence in Victoria, the stately Government House mansion, Lam spoke with Vancouver Bureau Chief Hal Quinn. Excerpts:

Maclean’s: Why did you first move to Vancouver?

Lam: My wife and I both love nature, flowers and gardening. In Hong Kong, that’s not easy. When we first came to Vancouver it was so beautiful, it brought tears to our eyes. Maclean’s: Was it a difficult transition?

Lam: We lived in a motel for one-and-a-half months, and every day I went out job hunting. When the money ran out, I got a job selling for a small real estate company.

Maclean’s: How would you compare the changes in Chinese society of Vancouver.

Lam: When we first arrived, I used to say that the community here was about 50 years behind. People separated the several eras of Chinese by the food. If you order certain things, then you are of that era.

Maclean’s: Has the community changed substantially?

Lam: When we came here, we had to speak Toishan—a small village south of Canton, now called Guangzhou—as that is where most of the earlier Chinese came from. But now they have to learn Cantonese, which 99.99 per cent of Hong Kong people speak, because we overwhelmed them.

Maclean’s: How has Vancouver itself influenced the Chinese community?

Lam: When charitable organizations were formed in Chinatown, a lot of the local Chinese became volunteers. I believe the Chinese

learned this from being Canadianized. Maclean’s: As southern China opens up, are many recent arrivals returning to Hong Kong to invest there rather than in British Columbia?

Lam: Yes, definitely, we have seen many cases of that. Over the past three years, growth in China has not been less than 13 per cent annually. But I am hopeful that they will come to appreciate the kind of peace, law and order that we give them—the kind of acceptance that they have tasted here.

Maclean’s: And what of Hong Kong’s future? Lam: If Hong Kong, after 1997, should become totally a Chinese city, it would be no different than Guangzhou, or Shanghai. The attraction of Hong Kong is its uniquely westernized rule of law. Maintaining that is the key. 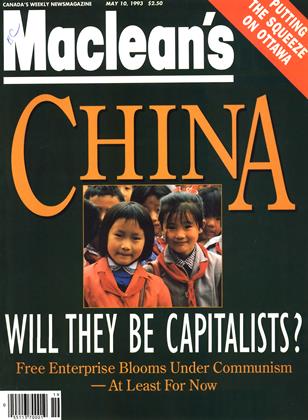