The Last Days of Chez Nous is the most accomplished of the three. Sensitively directed by Australia’s Gillian Armstrong {My Brilliant Career), it is about love, responsibility and betrayal. Beth (Lisa Harrow), a successful author, shares a house in Sydney with her husband, a carefree Frenchman named J. P. (Bruno Ganz), and her teenage daughter.

Beth acknowledges that her marriage, like her house, is a makeshift affair—“I had to buy my own wedding ring.” And during a visit by her freespirited sister, Vicki (Kerry Fox), it turns out to be more precarious than she had thought. While Beth drives into the desert with her father, trying to reconcile with him before he dies, back home, her sister and husband tumble into an opportunistic affair.

As Vicki, Fox projects a scary instability, the same mesmerizing edginess that she brought to the role of novelist Janet Frame in An Angel at My Table (1991). And Harrow incarnates such resilience that even as Beth’s world shatters around her, she does not seem like a victim. Beth is the story’s moral anchor, but all the characters are sympathetic on some level, taking affection where they can find it in the outback of family life. Scripted by Australian writer Helen Garner, Chez Nous purrs with fine-tuned emotional detail. Original writing, dead-on acting and arresting images combine to create a seamless intelligence.

Wide Sargasso Sea is about a more extreme family affliction. Based on the 1966 novel by Jean Rhys, it is the untold story of Lord Rochester’s first wife, the madwoman in the attic from Charlotte Bronte’s Jane Eyre. She is Antoinette (Karina Lombard), a French Creole beauty who has grown up in

Jamaica. Rochester (Nathaniel Parker) sails from England to wed her in an arranged marriage. She falls deeply in love. But Rochester’s English rationalism is disturbed by uncontrollable forces of sex, nature and obeah (voodoo). And their romance comes down to a primal clash between her Creole spirit and his colonial ego.

Australian director John Duigan lets the drama unfold as a cadence of lyrical images, set to an intriguing soundtrack by Stewart Copeland. Duigan draws strong performances from both Parker and Claudia Robinson, who plays the Rochesters’ intimidating housekeeper, Christophene. But Lombard is weak in the central role. Although her character’s mind is supposed to be at stake, it is hard to find much evidence of it behind her one-note performance. Her body, however, is eloquently displayed, with Parker’s, in graphic sex scenes.

The film-makers seem anxious to show and

climate. A co-production involving Canada, England, France and Australia, the story begins in the Canadian Arctic. In 1930, Walter (Patrick Bergin), a map surveyer from Montreal, flies into an isolated village and whisks an ailing 11-yearold Inuit boy named Avik (Robert Joamie) off to a Montreal hospital run by nuns. Looking for some warmth amid the alienation of white society, Avik strikes up a teasing friendship with a Métis girl named Albertine (Annie Galipeau). But their intimacy alarms the hospital’s strict teacher (Jeanne Moreau), who transfers Albertine to Ottawa.

The story then shifts to the Second World War. Avik, played by Hawaiian actor Jason Scott Lee (currently starring in Dragon: The Bruce Lee Story), has become a bomber crewman based in England. There, he reconnects with Albertine, now portrayed by French actress Anne Parillaud {La Femme Nikita). She works in bomber command’s London headquarters analysing aerial photographs. But, to Avik’s dismay, she has become involved with Walter, who is now an air force colonel specializing in reconnaissance.

Map metaphors abound as Avik triangulates his romantic position— sending Albertine coded messages in photographs that he takes from his bomber. As the lovers blindly navigate their way to a whimsical

union, Bergin’s character hardens into a calculating villain with a fetish for cartography. “Women are a map,” he says. “You’ve got to understand their longitude, and how much latitude you can take.”

The movie, directed and co-written by New Zealander Vincent Ward, errs on the side of literalism. And the dialogue is strewn with earnest statements about the plight of natives, which sound especially inauthentic coming from the inescapably French Parillaud. Mixing up actors and locations from all over the map, the film seems strained by the demands of international coproduction. Joamie and Galipeau, both natives of northern Canada, are captivating in the film’s haunting scenes on Baffin Island. But as the children grow up, contrivance sets in—and Map of the Human Heart loses its bearings. 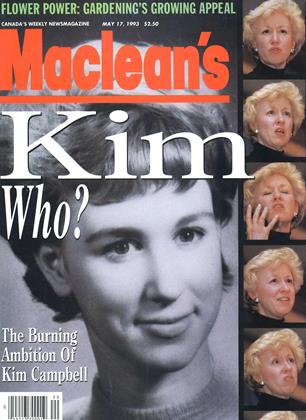