Three months ago, Ontario Premier Bob Rae outlined his vision of a kinder, gentler world of labor relations. On March 24, at a lecture at the University of Toronto packed with over 500 students, trade unionists and other longtime New Democratic Party stalwarts, Rae borrowed a phrase from the 17th-century English philosopher Thomas Hobbes and denounced the often “nasty, brutish and short” dealings between unions and management in the private sector. He then invited public-sector union leaders to join him in a “civil dialogue” about the most humane way of reining in the province’s soaring deficit. Last week, Rae’s effort to translate that harmonious vision into reality collapsed amid some of the nastiest public posturing in the history of Canadian labor relations. Speaking to reporters after a coalition of 26 unions walked out of last-minute talks with government negotiators, a defiant Sid Ryan, president of the Ontario division of the Canadian Union of Public Employees (CUPE), vowed to take political revenge against Rae and the NDP. Declared Ryan: “I

can guarantee that the 170,000 members of CUPE will not forget you in the next election.” Undaunted, Rae said that he will press ahead with plans to cut $2 billion from Ontario’s payroll. Said Rae: “We have some fiscal realities to face up to.”

The collapse—complete with denunciations of Ryan by some of his own members— proved in spectacular fashion just how difficult it is for NDP governments to convince their union allies to accept the notion of restraint. Under pressure from Ottawa and international credit rating agencies to slash their deficits, all of Canada’s provincial governments have introduced tough budgets this spring. Like NDP Premiers Michael Harcourt in British Columbia and Roy Romanow in Saskatchewan, Rae has asked unionized employees to accept cutbacks. But while those two premiers have had disputes with some unions, so far they have avoided province-wide showdowns. Rae’s attempt at centralized bargaining with unions representing 950,000 public-sector employees, inspired by practices in Europe and elsewhere, was a bold attempt to achieve a new type of

consensus. But in the end it backfired, and only widened divisions between Rae’s government and both business and labor leaders, as well as the province’s local governments, hospitals and school boards. The collapse of the talks also set the stage for more conflict in the months to come, as Rae moves to implement restraints on his own.

The deterioration in the relations between Rae and Ontario’s traditionally pro-NDP public-service union leaders over the course of three months has been dramatic. In the final days leading up to the June 4 deadline that Rae had set for the negotiations, he often sounded more like a corporate management negotiator than a socialist. He brandished both carrots and sticks: promising to exempt workers earning less than $30,000 a year from any cutbacks, but also threatening to lay off up to 40,000 employees if union leaders did not agree to a three-year wage freeze and other concessions.

But on June 4, the day after the talks collapsed, Rae told reporters that he still hoped he could reach an agreement with at least some of the unions. “My phone number is still in the book,” he said. At the same time, he conceded that layoffs are inevitable if the government hopes to achieve its target of trimming its $43-billion payroll. “The $2 billion will come out,” he said. “The size of layoffs will depend on people’s willingness to look at that overall figure.” But much of the responsibility for implementing those cuts will inevitably fall to local governments, hospitals, schools and universities as the province cuts back on the money it transfers to them. And despite the militant rhetoric of Ryan, CUPE national president Judy Darcy and other union leaders, many of their members say that they are now worried about the prospect of layoffs. “The unions didn’t come around and ask us how we felt,” said one government employee. “People are really scared in here,” said another.

With the collapse of the talks, Rae’s social contract proposal proved to be far more divisive than the less ambitious strategies pursued by the other NDP premiers. In Saskatchewan, Romanows government has laid off 400 of

the province’s 12,000 civil servants over the past two years and vowed in its March 18 budget to eliminate 650 more jobs. In British Columbia, Harcourt’s government reached an agreement with 38,000 hospital workers in March that provided them with wage increases and a no-layoff guarantee in return for the elimination of 4,800 jobs over three years through attrition and retirement. But the deal collapsed a month later when the province’s hospital managers, represented by the Health Labor Relations Association, rejected the deal. But the union returned to the bargaining table. On May 30, Harcourt legislated 4,200 Vancouver teachers back to work after a 20-day strike. But the denunciations that followed from union leaders were comparatively mild. Said Bernice Kirk, president of CUPE’s B.C. wing: “We don’t support government legislation

as a substitute for the negotiation process.”

Despite Rae’s intention to avoid confrontations with Ontario’s civil service unions, many experts on labor management relations say that his approach was doomed from the start. That approach was inspired by similar social contract arrangements in Europe and Australia, which Rae’s hand-picked negotiator, Michael Decter, cited in the government’s opening proposals to union leaders on April 5. But Donald Carter, for one, a professor of law and industrial relations at Queen’s University in Kingston, Ont., argues that those foreign models are difficult to apply in Canada. For one thing, European unions have participated in industry and nationwide bargaining for decades and are accustomed to participating in central economic decision-making. Canadian unions, by contrast, are focused narrowly on winning improved wages and benefits for their members. As well, many of the European social contracts were negotiated in inflationary times in an attempt to restrain increases, not during slumps. “Here the unions are

looking at rollbacks,” said Carter. ‘That’s a much harder pill for them to swallow.” Still, Carter argued that Rae put himself in a far more difficult bargaining position by failing to restrain public-sector wages over the past two years. The NDP in general is just not willing to bite the bullet,” said Carter. He also noted that while other provinces imposed restraints, “Ontario went merrily on its course.” Added Thomas Knight, director of the Centre for Labor and Management Studies at the University of British Columbia in Vancouver: “Any which

way you cut, you’re talking about how you spread the pain.”

As Rae now contemplates where to make those cuts, he clearly realizes that he will provoke protests from several sides no matter what he chooses to do. The province’s business leaders, who were skeptical at best about the social contract negotiations, are renewing their calls for him to clamp down hard on civil servants. Said Patrick Palmer, chairman of the Ontario Chamber of Commerce: “We will be totally dissatisfied if there is any agreement that preserves jobs and doesn’t permit the government to rationalize and restructure the public service.”

But publicand private-sector union leaders say that they will continue to resist wage freezes and layoffs. “You can’t solve a deficit problem by putting people out on the street,” said Buzz Hargrove, president of the 153,000-member Canadian Auto Workers Union. And Bob White, president of the Canadian Labor Congress, said that Rae has been caught up in hysteria about the deficit. He added, “We must have a debate on the

wisdom of reducing the deficit at times like this.” Other longtime NDP supporters are also deserting Rae over the issue of cutbacks. Said John Doherty, a Toronto school trustee and the federal NDP candidate for the riding of Davenport: “People are struggling to see the difference between this and the corporate agenda.”

Despite their denunciations of Rae’s policies, many union leaders say that they are still reluctant to jeopardize future political support for the NDP. “The NDP has done a lot of positive things for ordinary people,” said

Hargrove. “'This is a family fight over where we are going.” White also tried to minimize the possibility of splits in union ranks. He rejected the suggestion that private-sector union members who have suffered through wage freezes and layoffs during the recession have little sympathy for their counterparts in the public sector. Said White: “As long as the private-sector leadership explains it, that division won’t occur.” But those divisions may be deeper than White and other union leaders admit. Laurel Sefton MacDowell, a professor of labor history at the University of Toronto, said that “the workers themselves are often more conservative than the leaders.” MacDowell has a unique perspective on Rae’s strained relations with the union movement She is the daughter of Larry Sefton, the Hamilton steelworkers’ union leader who died in 1973. But

she is also a longtime friend and supporter of Rae, dating back to their undergraduate days at U of T in the early 1970s. Like Rae, she argues that unions can no longer dismiss concerns about government deficits out of hand. “Unless you get your deficit under control,” she said, “you really can’t implement the things you believe in.”

That is precisely the message that Rae delivered in the Larry Sefton Memorial Lecture at the university on March 24, just five days before he formally announced his plan for a social contract. Recalling his remarks after the collapse of the social contract talks last week, Rae said, “I still think that vision is the right one.” He also declared that “the old rhetoric is not going to protect jobs and services. The old rhetoric doesn’t make sense any more.” But amid the stormy debate that continued unabated after the collapse of the talks, few people on any side appeared to be listening. 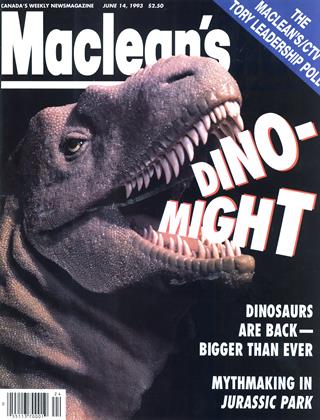