Maclean’s: You have the luxury of waiting a couple of years before going to the polls, but federal leader Audrey McLaughlin doesn’t. Have your government’s actions contributed to her low standing in the polls?

Rae: I don’t think so. Every election is determined by the choices people are faced with in that election. As people begin to recognize what those choices are, Audrey will do very well. I think she’s got a great many leadership qualities that will make a significant difference.

Maclean’s: You’ve spent a lifetime defending the interests of unions and working people. How do you feel when the same union leaders who once were allies and friends now attack you?

Rae: You don’t go into this line of work because if s easy. You have to take what you think are the right decisions. In terms of the labor movement, our actions are extremely consistent. We offered, and we continue to offer, an opportunity for people to come together and deal with a difficult financial situation. All of us at the provincial level are going through it. We’ve got to find a way of sharing the burden, and it can’t I be business as usual. It can’t be economics as usual, g Maclean’s: What has to be done?

I Rae: There has to be a recognition that we’re facing a I serious problem with the debt. Traditionally, there’s been I this denial within large parts of our society that there was a g connection between what happens in the economy and “ what happens in government. We are going through a serious process of economic adjustment as a province and as a country. How you deal with that defines whether you are a social democrat or are on the far right. It would be possible to lay a bunch of people off, shut down a bunch of services and just say, There, we’ve done it.’ We haven’t done that.

We’ve said: ‘Come and tell us how we can save money.

Become partners with us in solving this problem, but lefts get out of the culture of denial.’

Maclean’s: You have expressed frustration with how hard it is to make things happen in government. Is there a lesson that, perhaps, the economic vision in social democracy is defunct because of global forces?

Rae: I wouldn’t say that I feel frustrated at all. This is not a premier in a state of angst. You have to make difficult decisions and accept that they are going to make people unhappy. Ifs a case of tough love. But, at the same time, I think it is fair to say that we aren’t unique. Some of our supporters say, Why can’t you be like Sweden?’ Well, the party’s over there, too. There aren’t too many places where people are able to just fund everything and not figure out where the hell the money comes from.

Maclean’s: Bay Street criticizes you as a socialist while those on the left accuse you of turning your back on party traditions. How do you define yourself now?

Rae: I define myself as I always have—as a social democrat whose views are, I hope, deeply rooted in experience and in the realities of everyday life. I feel very strongly about the need for us to keep moving ahead on the equities and the justice agenda. But we have to be firmly rooted in economic realities. And I think that some of our critics on the left are not, and that’s a luxuiy you can afford when you are in opposition or when your role is that of being a social critic or a utopian thinker.

Maclean’s: People say that if you were in opposition today, you would be denouncing the government for the very actions you are undertaking.

Rae: I was becoming increasingly frustrated with my role in opposition—you can’t go through life with your hand on the horn. At some point, you’ve got to start contributing to doing things, and there is a terrible tendency in opposition to just oppose. Being in opposition for 60 years was bad for the New Democratic Party of this province. It created expectations that were unrealistic and it meant that there were a lot of choices—hard choices—that the party didn’t have to make because we were in opposition. What passes for politics in opposition is simply the articulation of grievance. And the articulation of grievance doesn’t make a program for a government. 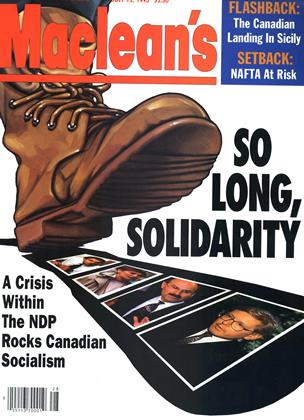