The confrontation seemed quintessentially Canadian. A mood of conviviality prevailed last week in the picturesque fishing village of Shelburne, N.S., even as a flotilla of more than 100 Nova Scotian fishing boats held a 400-foot Russian trawler hostage to protest foreign fishing in Canadian waters. “We are welcome onshore,” said a 22-year-old Russian seaman from the Pioner Murmana, which found itself under siege as it attempted to unload 12,000 tons of cod at a local fish plant. He and the other 50 Russian crew members strolled casually through the crowd of Canadian fishermen, families and supporters who swarmed the wharf where the freighter had docked. “We’ve got nothing against any of them,” insisted James Elliott, 28, a fisherman who sold postcards supporting the Canadian cause. “This is politics.” At week’s end, the protesters lifted their six-day blockade after Ottawa agreed to order all foreign fishing boats to leave Canadian waters off southeastern Nova Scotia by Aug. 20. Declared Gary Dedrick, a spokesman for the Shelburne protesters: “The bottom line is that Canadians will be first, and the prime concern is our coastal communities.”

The standoff in Shelburne, 200 km southwest of Halifax, was one of several potentially explosive conflicts that last week bedevilled federal Fisheries Minister Ross Reid, who took over the troubled department from fellow Newfoundlander John Crosbie on June 25. In Lunenburg, 90 km southwest of Halifax, fishermen blocked another Russian ship from unloading fish at a giant National Sea Products Ltd. plant—a protest that also ended peacefully after the RCMP convinced fishermen to scale back their effort to an information picket. In Newfoundland, police arrested militant environmentalist Paul Watson after his protest ship sideswiped a Cuban trawler as part of an independent campaign to force foreign fishing boats off the Grand Banks. Provincial politicians in Newfoundland and Nova Scotia joined the battle, firing verbal salvos at their federal counterparts as the issue became a test of Kim Campbell’s new government.

The cause of the conflicts was the severe depletion of cod and other species of fish, which has devastated local fishermen and plant workers by, in many cases, eliminating their only independent source of income. In July, 1992, Ottawa forced 25,000 Newfoundland fishery workers off the job when it announced a two-year closure of the northern cod fishery. The moratorium is intended to save from extinction the fabled Grand Banks fishery—a rich source of northern cod that has lured fishermen to the waters off Newfoundland for more than 500 years. Federal fisheries experts now concede that it will take until the turn of the century, if not longer, before the moratorium can be lifted.

Last December, the misery among fishery workers spread to thousands of inshore fishermen in southwestern Nova Scotia. In that month, Ottawa, fearing the depletion of groundfish stocks, set a haddock quota for this year of about 3,000 tons—half the quota for 1992. In Shelburne County, the cuts have been extremely painful. The fishermen complain that, at the levels set by Ottawa, they cannot

catch enough fish to make a living. Explained Conrad Chase, 39, a father of four from Shelburne who operates a 30-foot long-liner with his brother David: “Once you pay your insurance and expenses there’s nothing left over.” But the anger is also directed at foreign fishing fleets, which have become a convenient scapegoat as Canadian fish quotas steadily dwindled. In truth, domestic fishermen bear some of the blame for ravaging the Atlantic fishing grounds—even though it was

done with the consent of the federal government, which until recently refused to cut quotas despite evidence that stocks had fallen to alarmingly low levels. Moreover, foreign ships operating within Canada’s 200-mile limit actually take few fish from Canadian waters. Last week, 25 of the 28 foreign trawlers operating off Nova Scotia and Newfoundland were fishing for silver hake and Greenland halibut—two species that hold little appeal for Canadian consumers.

Still, last week’s outbreak of civil disobedience indicated the depth of frustration among Nova Scotia fishermen. Despite assurances from Ottawa to the contrary, the protesters maintained that foreign vessels are taking large amounts of young cod along with their haddock and halibut.

It was into that confused situation that the Pioner Murmana sailed. The blockade began when word spread by radio about the rusty hulk’s impending arrival in Shelburne with a load of frozen cod. The local fishermen suspected the cod had been taken from Canadian waters—a claim dismissed by both the Russians and federal fisheries officials, who said that the cod came from the Barents Sea off the coast of Russia. At first, Reid vowed that he would not talk to the protesters until they ended the blockade. He also threatened to call in the RCMP to break up the protest. Declared Reid: “I can’t respond with a gun to my head.”

But Reid softened his stance after a number of provincial politicians questioned his tactics. Nova Scotia Premier John Savage, for one, said that, in legal terms, Reid’s approach was probably correct. But, Savage added, “I question whether he is morally right under these special circumstances.”

Reid sent his acting deputy minister, Maryantonett Flumian, and other Fisheries and Oceans officials to Nova Scotia to meet the Shelburne protest organizers. After two days of intense closed-door meetings, they struck a deal. In addition to ordering the removal of foreign vessels off Nova Scotia by Aug. 20, Ottawa agreed to reopen negotiations on increased quotas for inshore fishermen to help them get through the year. Despite the fishermen’s claims of victory, however, federal spokesmen insisted that they had made only modest concessions. For one thing, they said, the Aug. 20 deadline meant very little since most foreign vessels were expected to leave by that time anyway. What the fishermen did achieve, said Liseanne Forand, a senior Ottawa-based Fisheries official, was to seize the public agenda. Said Forand: “They’re in a stronger position when it comes to negotiating for next year.”

While public attention focused on the events in Nova Scotia and Newfoundland, Canada’s diplomatic efforts could, in the long run, have an even greater impact on the Atlantic fishery’s future. Canada has tabled a draft convention before the United Nations on a set of regulations governing the fishing of stocks that straddle different regulatory zones, as well as highly migratory species such as northern cod. A UN committee is also considering a Canadianbacked convention that would enable the seizure of fishing vessels flying flags of convenience. But to the fishermen of Shelburne all of that activity seems extremely remote. Said William Brophy, 29, who has been working on boats since he was 14: “Sometimes it seems like the people who make their living off the fish have no say in things.” Last week, at least, that changed. 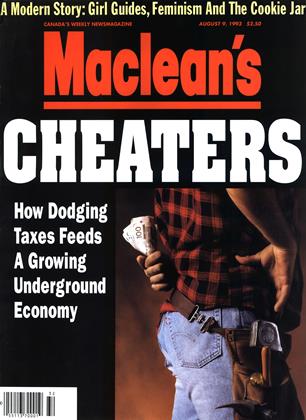