I have no plans to reduce the number of helicopters... . This is not a particularly effective way to reduce costs.

I am announcing the reduction in the helicopter program [from 50] to 43.... This decision will yield savings of close to $1 billion.

As an about-turn, it rivalled the manoeuvrability of the costly piece of hardware at the centre of a bitter political firelight: the European-built, state-of-the-art EH-101 helicopter. For months as defence minister, Campbell stood her ground against opposition fury over the $5.8-billion 50-helicopter purchase initiated last year by her predecessor in the portfolio, Marcel Masse. But last week, on the eve of an election call, Campbell decided that the time had come to respond to a political downdraft that threatened to create turbulence throughout the campaign. Grounding seven of the controversial machines, Campbell said that the demands of deficit reduction had overtaken her previous convictions. “I’m Prime Minister now,” she explained, “and I am responsible for the entire government and the entire question of how

we’re going to get to zero deficit within five years.”

For Campbell, it took an improved view of the Overall Good from the Prime Minister’s vantage point to bring about a change of heart. But even without the vision afforded by the highest office, her successor in Defence, Tom Siddon, had no trouble embracing the new numbers. Reminded at a news conference of Campbell’s former doubts, Siddon noted pointedly that he was now the minister, and he was satisfied that the arithmetic was in order. As the reporters pressed, he appeared to lose his patience, admonishing them at one point: “Sometimes you guys are so preoccupied with the truth that you don’t understand that time changes a lot of things.”

The election-eve announcement may, indeed, change several elements of the helicopter purchase program, in ways that politicians and military specialists could not agree on last week. Among the basic unresolved elements:

The costs: First, in a change of heart, the government accepted the opposition’s insistence that the real cost would total $5.8 billion, a figure that includes the government’s estimate of the potential impact of inflation over the 13-year delivery period on the $4.4-billion contracts signed last year. Fast week, the defence department calculated a $650-million saving from cancelling

the seven helicopters and their associated costs of long-term logistic support, project management and contingency funding. It accounted for the rest of the $1 billion by a corresponding reduction in contingency costs (a $150million saving), and reducing the inflation escalator by $200 million.

The new math differed markedly from the old math. Last April, assistant deputy minister of defence Raymond Sturgeon assured a Commons committee that cutting five helicopters I would only save $150 million. Defence specialists, including retired Cmdr. Peter Haydon, a naval analyst at Dalhousie University in Halifax, predicted last week that the cutbacks in fact would ultimately produce little saving. And whatever the total, Siddon admitted that most of the savings would not be achieved until after 2000, well beyond Campbell’s five-year deficit reduction target.

The contracts: More than half of the original $5.8 billion was earmarked for spending in Canada. But the contracts will now have to be renegotiated. EH Industries Ltd., the British-Italian builder, and Montreal-based Paramax Systems Canada, its Canadian partner in the project, said that they would have to review their commitment to spend $3.24 billion in Canada under the contracts for 50 aircraft.

The capabilities: The cutback left the order of 15 helicopters for search and rescue functions unchanged, but reduced the purchase of armed shipborne models from 35 to 28. The defence department considers the EH-101 to be ideal for the navy’s job of watching Canada’s coasts. Last week, Liberal Leader Jean Chrétien reiterated his party’s position that the current navy and Coast Guard helicopters could be refurbished at a substantial saving over the EH-101 program, although he did not specify a cost. And some critics insist that the end of the Cold War means that Canada does not need the military helicopters at all.

The campaign: Whatever its merits militarily and economically, the helicopter reversal may make it a lot more difficult for the Tories to portray their major opponent, Chrétien, as a vacillator whose changes of mind make him unfit to run the country. Last week’s announcement may not have reduced the EH-101’s potential as an election weapon—it may simply have given the versatile helicopter a different combat role in the campaign. 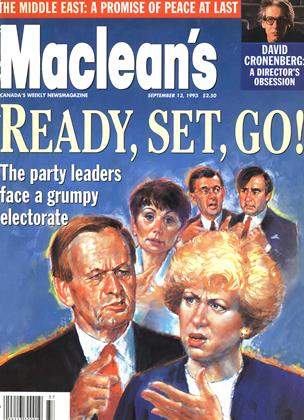