It was the most sophisticated unmanned space vehicle ever built. Sent up nearly a year ago on a mission to study a distant planet, the $ 1.28-billion Mars Observer functioned almost flawlessly—until last week. Then, just three days before the craft was scheduled to begin orbiting Mars, National Aeronautics and Space Administration (NASA) controllers abruptly lost contact. Technicians frantically sought to re-establish communications, but, by week’s end, they had failed to do so. While outside experts speculated that a technical glitch may have caused the craft to blow up, some NASA officials feared that the Observer had bypassed Mars and begun a silent voyage around the sun. Whatever happened, the mission’s failure would be a major setback for interplanetary exploration—and for NASA itself. “We’ll see a political fire storm,” predicted John Logsdon, a space policy analyst at George Washington University in Washington. “NASA’s programs

are not just in trouble, they are in jeopardy.” The Observer’s mysterious fate could not have come at a worse time for the U.S. space program, which has suffered a string of costly failures. If all had gone well, the Observer eventually would have settled into an orbit 234 miles over the Martian poles and circled the planet for about 23 Earth months, taking photographs and studying the Martian environment as a preliminary step for any future manned flight. If the Observer mission proves to be a write-off, it will be politically difficult to find funding for another mission. Congress, which returns from its summer recess on Sept. 7, is searching for budget cuts to shrink the federal deficit of about $400 billion. “How can Congress risk another billion dollars to send another probe to Mars?” asked Logsdon. “There are too many priorities here on Earth.” At the very least, long delays seemed likely. A White House official who requested anonymity said that the space program might have to wait for President Bill Clinton’s second term “to get the sort of funds that I NASA needs to get back on “ track.” Added an adviser to Senate Republican leader Bob Dole, who also wished to remain anonymous: “The American people are growing tired of NASA failures. There isn’t much support for big spending until the economic recovery speeds up and unemployment falls.”

The Observer’s problem became apparent just as its rocket engines were being automatically pressurized to slow the craft and move it into an orbit around Mars.

The onboard radio, which had been closed down because of vibrations expected during pressurization, could not be switched on again. “It’s terrible, terrible, terrible,” moaned Arden Albee, a planetary scientist involved in the project. In the desperate hope that a minor technical problem was responsible for Observer’s silence, scientists battled to contact the spacecraft, transmitting messages every 20 minutes and trying to reprogram computers and start back-up systems— but to no avail.

Despite the Observer’s continuing silence, NASA officials said that the spacecraft’s computers may have automatically put it into a Mars orbit. But if the craft was damaged, it was more likely to have drifted past Mars, into a wide orbit around the sun. That would leave a slim possibility that scientists could at some point regain control of the spacecraft; if they succeeded, they might be able to put it into orbit around Mars when it passes near the planet again in about two years. But many scientists, noting that the problem occurred as the fuel tanks were being pressurized, had already reached a more pessimistic conclusion. “Most probably there was an explosion,” said John Pike, a space policy analyst with the Washington-based Federation of American Scientists. “Our precious Mars Observer could be in little pieces.”

The Observer mission appeared to be the latest in a string of disasters involving NASA’s space vehicles. The misfortunes began in 1986, when the spectacular explosion of the shuttle Challenger killed all seven astronauts aboard. After the $2-billion Hubble Space Telescope was launched in April, 1990, scientists discovered a flaw in its primary mirror that limited the telescope’s usefulness. And by a cruel coincidence, less than five hours after the Mars Observer went silent last week, scientists lost contact with a $88-million weather satellite developed by NASA and launched on Aug. 9; they said the satellite probably suffered an electrical malfunction that rendered it useless.

In the face of NASA’s failures, politicians increasingly have begun to ask whether the agency has lost its touch. Many critics argue that instead of concentrating on large, complex projects, NASA should develop smaller, lowercost space vehicles. “NASA wants to do big things,” said Joan Johnson Freese, a space analyst with the U.S. Air War College at Maxwell Air Force Base in Montgomery, Ala. “Unfortunately, that sometimes backfires when an engineering glitch occurs.” The agency’s biggest current project is the $25-billion space station, for m which major components are being o designed and built in Canada by y Toronto’s Spar Aerospace Ltd. and m other firms. The station is scheduled to go aloft near the end of the century. Congress approved funding for the scaled-down space station by a narrow vote in June. Now, pressure could develop in Congress to divert funding away from the station—unless the Mars Observer breaks its ominous silence and revives enthusiasm for costly and difficult ventures into space. 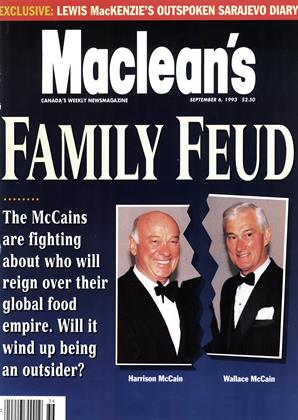