Forecasting any phenomenon a year in advance is a risky proposition at best. Last January, psychics interviewed by the National Enquirer supermarket tabloid predicted that singer Kathy Lee Gifford would replace Jay Leno as the host of The Tonight Show, and that the Hubble telescope orbiting the Earth would discover evidence of alien beings living on a large asteroid. In Ottawa, then federal finance minister Don Mazankowski forecast that the federal budget deficit for the 19931994 fiscal year, which ends on March 31, would be $32.6 billion. As well, seven out of a group of eight leading Canadian economists surveyed by Maclean’s offered deficit estimates ranging from $29 to $35

billion. But on Nov. 29, Mazankowski’s successor, Paul Martin, said that the total would likely fall somewhere between $44 billion and $46 billion. In hindsight, the eighth member of the Maclean’s panel, Toronto-Dominion Bank vice-president Ruth Getter, offered perhaps the most re alistic deficit forecast: “God knows!” Unfazed, Getter and her colleagues have once again consulted their mathematical models of the economy, as well as other sources—worldly or otherworldly— to assess the year ahead. And Maclean’s has canvassed the same eight organizations as last year for their forecasts. All kidding aside, the economists’ forecasts for nine other key indicators, including the unemployment rate and the value of the Canadian dollar, proved to be more accurate than their deficit projections (page 48). And however reliable or unreliable any economic forecasts are, business executives, government ministers and individual Canadians use them to help make financial decisions involving billions of dollars.

This year, as they were last year, the economists are guardedly optimistic. They all forecast slightly greater economic expansion in 1994 than the estimated 2.5-per-cent growth in 1993. But they add that few Canadians will notice the impact of that growth in their pocketbooks. After taking inflation into account—and the inevitable increases in taxes—average individual and family incomes will likely remain level again this year for the third year in a row. Said Gilles Soucy, chief

To elaborate on their predictions, each of the forecasters answered 10 questions that Canadians commonly ask as they ponder the year ahead. In addition to Getter and Soucy, the panel members include: Gerry Angevine, president of the Canadian Energy Research Institute in Calgary; Lloyd Atkinson, chief economist of the Bank of Montreal in Toronto; Brian Crowley, president of the Halifaxbased Atlantic Provinces Economic Council; Michael McCracken, president of Ottawabased Informetrica Inc.; George Pedersson, president of G. A. Pedersson & Associates in Vancouver; and Surinder Suri, chief economist of the London Life Insurance Co. in London, Ont. The questions and a summary of the group’s responses:

The consensus is: probably. While the economy appears to be climbing out of a recession, that growth is unlikely to make a significant dent in the unemployment rate this year. Some companies are hiring, but only fast enough to match the expansion in the labor force. That means that the rate will stay at doubledigit levels. Still, Atkinson said that “90 per cent of the people who have jobs now will have them at the end of the year.” But he and the other economists warn that some sectors are still in the middle of painful bouts of re structuring and downsizing (read: layoffs).

The answer from most of the economists is “Yes,” so long as the purchase does not stretch the family budget. With interest rates at their lowest levels in three decades, and house prices in most Canadian cities lower than they were a year ago, it is clearly a good time to buy. But the economists disagree on how long bargains will last, and whether or not mortgage rates will drop even further. Pedersson advises anyone sitting on the fence to buy “sooner rather than later.” He added: ‘You’re not going to get the same combination of factors like this again.” Getter agrees. “Although mortgage rates may drop a little more, it really isn’t worth waiting for,” she said. But McCracken urges buyers to take their time. “Housing is not likely to be a good investment in coming years since inflation will be very low,” he said. “Mortgage rates in such an environment will remain low.”

Statistics Canada declared the recession officially over last January. But despite a surge in exports and big declines in interest rates since then, overall economic growth has remained slow largely because nervous consumers have postponed purchases of cars, appliances and other big ticket items. But they may have to satisfy at least some of that socalled pent-up demand this year. According to Atkinson, the average car on Canadian roads is now more than six years old—a post-Second World War record. “The repair business is booming,” he said. “But for a lot of people, those bills are now getting too high.” However, Atkinson and the other economists caution that many consumers, like businesses and governments, are still paying off big debts left over from the 1980s.

4. WILL I GET A WAGE OR SALARY INCREASE?

Most of the panel members predict that average wage and salary increases in Canada will be very small again this year—somewhere between one and two per cent. But they add that the average numbers will mask some big discrepancies. Government

employees at all levels will likely face more freezes and rollbacks. In the private sector, many large manufacturers are still downsizing, so unions are in a weak bargaining position.

In the growing service and high technology sectors, some employees could receive heftier upgrades. “With all the restructuring going on, there really is no average any more,” said Pedersson. McCracken adds that in almost all industries, companies are tying pay more explicitly to productivity.

5. WILL THE COMPANY I WORK FOR EARN A PROFIT?

One key economic indicator that jumped sharply in the last half of 1993 was corporate profits. And like his counterparts,

London Life’s Suri says that there will be another slew of double-digit profit increases when many Canadian companies publish their annual reports in February. But he added: You’ve got to keep in mind that they’re starting from a low base.” As well, many of those profit jumps stem from painful cost-cutting efforts,

rather than higher sales revenues. ‘The game in town now is to keep prices where they are and cut down on costs,” he said. As a result, Suri says that companies will think twice about rehiring workers or handing out huge wage increases. Also, the profit jumps will likely vary widely among sectors and among regions. Said the Canadian Energy Research Institute’s Angevine: “Generally, companies in the health, computer, communications, forest products and natural gas industries will fare well. Businesses in Western Canada will do better than those in most other parts of the country.”

6. IF I HAVE MONEY TO INVEST, SHOULD I BUY STOCKS OR BONDS, OR PUT IT INTO A GIC?

At first glance, the choice seems obvious. With interest rates in the single digits, the guaranteed returns on bonds and GICs look

puny. As a result, Canadians are pouring billions of dollars into stocks and stock-based mutual funds. That stampede pushed the Toronto Stock Exchange 300 stock index to record levels in 1993, and most of the economists predict that share prices will climb higher next year. But all of them warn that buying stocks is always a risky proposition. “I’m terribly nervous about mutual funds,” said Atkinson. “They have pushed the ratio of share prices to earnings per share to stratospheric levels.” Atkinson and others also argue that if interest rates decline further, say a percentage point or two, bonds and

bond-based mutual funds may perform well. Bonds trade on the open market, and as rates decline, bond prices tend to rise to match the returns on stocks and other riskier investments. Still, many members of the panel are leery of offering any investment advice at all. ‘Talk to a professional,” said McCracken. “Don’t listen to economists giving generalized advice.” When asked to predict the year-end value of the TSE 300, Getter replied: “Only God and mammon know.”

7. WILL MY TAXES GO UP? WILL ANY TAXES DECREASE?

Economists are rarely unanimous about anything, but all of them agree that taxes are bound to rise in 1994. But most of the panel say that both Ottawa and the provinces are worried that they are testing the tolerance of Canadians for new taxes. As a result, the Chrétien government will likely try to slash spending by cutting transfer payments to the provinces. The provinces, in tum, will reduce funding to municipal governments. So which taxes will rise? “School taxes, parking fees, you name it,” said Pedersson. “It just gets pushed down to municipal governments— who push it down to taxpayers.”

8. AFTER TAKING INFLATION AND TAXES INTO ACCOUNT, WILL I BE BETTER OFF AT THE END OF THE YEAR THAN I WAS AT THE BEGINNING OF THE YEAR?

Probably not. Crowley put it most succinctly: “You’ll be worse off, but not by too much.”

9. WHAT’S THE BIGGEST DANGER ON THE ECONOMIC HORIZON?

Although most Canadian economists have been railing against the “D” words—debt and deficit—for years, even they now sound a little weary when talking about them. Getter, for one, still raises the spectre of international investors suddenly panicking about Canada, and provoking a currency crisis as they pull money out of the country in droves. But other members of the panel worry that governments will be too aggressive in slashing spending. Said Pedersson: “If they cut too much, it could undermine confidence in the recovery.” Much of that recovery so far has been based on exports. But Suri notes that Japan and Europe, Canada’s secondand third-largest export markets after the United States, are still mired in recessions. On a personal level, the greatest risk is that individuals will be caught in the ongoing transformation to the New Economy—dominated by services and knowledge-based industries.

10. WHAT’S THE BEST REASON FOR OPTIMISM?

Canadians have international currency markets to thank for much of the recovery so far. “Getting the dollar back down to 75 cents got us back into the game,” said the Caisse’s Soucy. He and the other panel members say that the low dollar should help manufacturers and resource companies again this year by keeping the price of their products down on world markets. As well, while Europe and Japan are still struggling, the U.S. recovery appears to be gaining strength. And while the economists still debate whether or not Bank of Canada governor John Crow’s high interest-rate battle against inflation has claimed too many casualties, the current low interest and inflation rates are bound to pay dividends at some point. Said Suri: “I realize that this won’t translate into a hell of a lot for the common man this year. But it will in the long term.” Until then, most Canadians can only console themselves by speculating about the riches that may lie in their future. 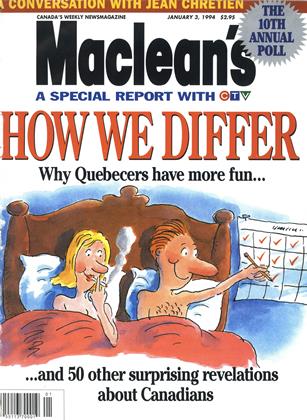