When Audrey McLaughlin first entered the House of Commons, she sat watching the men bellow at each other in the farce known as Question Period. After several months of observing the posturing and insults, she was reminded of her favorite episode of the Murphy Brown TV sitcom.

‘The men in the newsroom are having a huge fight that’s all about their egos,” McLaughlin recalled. “Murphy watches them in disgust for a while, and finally she bursts out, ‘Oh, why don’t you all just drop your pants and I’ll get a ruler?’ ”

The anecdote is recounted in The Gilded Ghetto: Women and Political Power in Canada, a new book by Calgary journalist Sydney Sharpe. To be published this month, it details the strange, isolated (“unspeakably lonely” in Kim Campbell’s phrase) life of women sent to serve their country in Ottawa.

Even in retrospect, the numbers (or lack of them) are remarkable. The first female MP, Agnes Macphail, sat alone among all the blue serge from 1921 to 1935 before another woman, Martha Black, joined her. For five more years, they could at least see each other, but there wasn’t much chance of co-operation, Macphail being a CCFer and Black a Conservative.

In the four decades from 1921 to 1964, only 17 women were elected to Parliament. And seven of them got there only because they inherited the ridings of their dead husbands.

Sharpe is good at recording the sheer anger of the women trapped in the boys club. When she wrote Iona Campagnolo asking for an interview, the former Liberal cabinet minister fired back a furious response, asking why “a man” would dare write such a book. The author had to explain that she was burdened as a woman whose name was Sydney.

Sharpe is sharp at setting the historical scene. Women in France weren’t even allowed to vote, since they were still not considered citizens, until 1944—in recognition of their war effort, after the Hun had been expelled. British women finally got the vote in 1928—15 years after a suffragette threw herself under the horses at the Derby at Epsom Downs and was trampled to death “in a ghastly example of appropriate symbolism” by the steed owned by King George V. (Women in New Zealand got the vote in 1893.)

The author notes shrewdly that all the symbols of parliamentary government are still drawn from the manly arts of war. The chief official in the Commons is the sergeant-at-arms, who carries the mace. His counterpart in the Senate is the gentleman usher of the black rod.

Campagnolo notes that all the paintings in Parliament’s corridors are of men and war and swords and blood. The few female images are British queens, including Victoria, whose statue apparently was first guarded by an imperial lion “in a state of too-obvious virility.” In deference to shocked females and curious children, his bronzed penis was sawed off in 1908—“the only emasculation known to have occurred on Parliament Hill.” What is a girl to do? For one thing, on Parliament Hill where hundreds of women work for MPs, Tory Barbara Greene demanded better lighting after she was physically assaulted in a dark parking lot. Sharpe says the highly respected Toronto Star columnist Carol Goar was also mugged in the same area.

The new band of women MPs, cutting across party lines, got a tuck shop carrying things women need—pantyhose and sanitary napkins. Writes Sharpe: ‘Within the bustling community of Parliament Hill, with its myriad services aimed at males, women were given less consideration than they would receive in any rural Canadian town with a drugstore.” She has an interesting theory of one defensive mechanism that lonely, talented women—trapped in a male preserve— mount in the isolation. From Judy LaMarsh to Kim Campbell, they gain weight. Monique Bégin, slim and attractive when first arriving in the Commons from Quebec, confesses that she gained 60 lb. in six months after going into Trudeau’s cabinet.

She devotes an entire chapter to Brian Mulroney, the classic MCP in youth, being educated by his wife and his female Tory mentors, eventually doing more than any PM to advance women in Ottawa. In his first cabinet, when only nine per cent of all MPs were women, 21 per cent of his ministers were female.

She has the perceptive detail. Of all the calls received by Barbara McDougall’s constituency office during the crucial FTA election, there were more 0 about her hair than about 1 the trade pact. She tells the g reality: of all the women “ who have recently hit the

top reaches in Canadian politics, they’ve all been either divorced or single—from Charlotte Whitton to Sheila Copps, Pat Carney, Flora MacDonald, LaMarsh, Bégin, the widowed Judy Eróla and McDougall and on and on.

She ends on hope. While 66 Tory women candidates lost, meaning that with the NDP two of Canada’s major parties had elected a grand total of two females, there was another side. The Grits ran 64 women; 36 of them won. Eight of the 10 Bloc Québécois women became MPs. Even the Reform, where the broads are supposed to serve coffee, elected seven of its 23 female candidates.

The percentage of women in Parliament rose from 13.4 to 18. In less than a decade since Mulroney signalled his approval, female participation has nearly doubled.

In 1968, at the height of femme fascination with Trudeaumania, exactly one woman, NDP’s Grace Maclnnis, was elected. 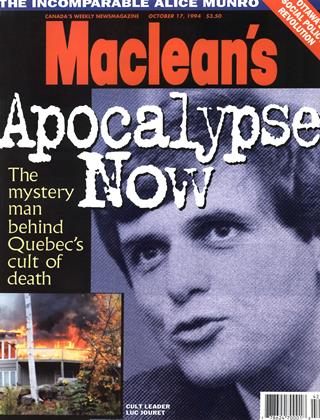