By all accounts, they were normal youngsters, three teenagers at the threshold of manhood. Like 18-year-olds anywhere, they had problems. But Michael Côté, Stephane Langlois and Steve Dallaire also brimmed

with promise. The three youths from the hard mining towns on the Quebec-Labrador border were bright students, good friends, loved—and loving—sons. They had many reasons to live; instead, they chose to die. They drove clear across a continent to do it, entombing themselves inside a storage locker near Vancouver, slowly inhaling the exhaust fumes from their own car.

And as they lay dying so far from home, they listened to the strident melodies and bleak lyrics of the troubled young man who seems to have inspired their last desperate act: grunge rock star Kurt Cobain, himself a suicide. “When Kurt Cobain died, I died,” Steve Dallaire wrote shortly before he and his two companions ended their lives amid the nondescript clutter of auto shops and discount stores in the industrial outskirts of Langley, B.C. Many other young people have expressed the same sentiment since Cobain, leader of the wildly popular group Nirvana, fired a shotgun blast into his brain on April

5, extinguishing an angry voice that spoke directly to a generation of disillusioned youth. In fact, there have been at least three known copycat suicides in the United States as a direct result of Cobain’s death and, only last week in Montreal, a 17-year-old youth jumped to his death from the Jacques Cartier Bridge while listening to Nirvana on his Walkman. But few have gone to the lengths that Dallaire and his friends chose to transform what should have been a harmless metaphor into an all-too-grim reality. ‘The way I would have liked to have died is by a

bullet in the head and with the same firearm that Kurt Cobain used,” Dallaire wrote. “But it’s too late now. Goodbye.”

Those chilling words were inscribed in a journal, contained in an ordinary triple-ringed binder, the kind found in schools across the country, which police found when they discovered the youths’ bodies last week. It is a remarkable document, offering a rare glimpse into the minds of three suicidal youngsters, part of one of the most unsettling trends in modem society. In 60 pages of drawings and writing, the three French-speaking teenagers from the northern woods recapitulate in detail a month-long odyssey that took them from their junior college classrooms in Quebec City in mid-September to their deaths early in October behind the steel door of a concrete storage locker on the outskirts of Langley, 45 km east of Vancouver.

An employee of the sprawling storage facility discovered the bodies on Sunday, Oct. 16. “I was working on the roof and caught the smell,” recalled the burly, gravelvoiced attendant, who refused to give his name. Drawn by the odor, he raised the door on Unit 27 and glimpsed a figure slumped

behind the wheel of a blue 1987 Plymouth Horizon sedan: “I saw the kid in the front seat. I didn’t stick around to see any more. I got the hell out of there.”

Investigators from the Royal Canadian Mounted Police detachment in Langley discovered the three corpses along with the body of a white rat, evidently a pet. All were badly decomposed; police estimated that the deaths occurred on Oct. 7. Dallaire, later identified as a resident of Labrador City, Nfld., was found in the driver’s seat. Michael Côté, a native of the neighboring mining town of Fermont just across the Quebec border, lay by his side. On the floor in front of the car, Stephane Langlois, also of Fermont, curled in a fetal position. By his side was a pair of jeans, upon which a will had been hurriedly scribbled. The writing trailed off into illegibility, indicating that it had most probably been composed while the author and his companions succumbed to carbon monoxide poisoning. In the car’s tape deck, stuck in the play position, was a tape by Cobain’s band Nirvana. “The car’s battery was dead,” said RCMP Staff Sgt. Richard Lawrence. “The ignition was on.”

If there were any doubts about the nature of what transpired inside Unit 27 at Langley Mini Storage, they were quickly erased when police read the teenagers’ journal. In their diary, the trio made no attempt to disguise their purpose. The front page is titled, in English, “The last

trip.” The first drawing, portraying either a bedroom or a hotel room in Quebec City, is called ‘The big decision.” The last is an illustration of the three young men in their car in the locker. In between, there are frequent written and pictorial references indicating that suicide is the the ultimate goal of a transcontinental trek that took them from Quebec City to a rock concert in Montreal, then on to Toronto, Niagara Falls, Detroit, Milwaukee and then into Montana before they crossed back into Alberta for the last lap to Vancouver. There, they first stayed at a shelter for street kids called the Safe House, whose coordinator last week described them as “wonderful” youngsters who were “like a breath of fresh air” during their 2x/iday stay. Nevertheless, they did not waver from the purpose of their trip. “We all find -this troubling and bizarre 1 because they decided to com£ mit this act sometime around >the 9th or 10th of September Sand they committed the act $on or about Oct. 7,” said Law|rence. “In all that time, they £ did not change their minds.” “ Even more worrisome is

the lack of any adequate explanation for the tragedy. Noting that the boys’ journal “depicts a lot of love, very close families,” Lawrence said there was little in their backgrounds to indicate suffering on a level serious enough to provoke suicide. In his view, distress over Cobain’s fate may have helped to drive the youths towards suicide, but “curiosity about the after-death” may also have played a role.

Certainly, the youngsters’ parents were at a loss for explanations last week as they struggled to come to terms with the tragedy. “I simply cannot understand what’s happened,” confessed a distraught Christian Côté, father of Michael. A geological engineer in Fermont, Côté described his son in glowing terms. “He was a really bright kid, maybe the brightest in his class,” he told Maclean’s. “He loved the outdoors. He could never wait to get out into the bush on his Ski-Doo. They tell me that

this guy Cobain is somehow responsible but I can tell you that Michael was not even that fond of Nirvana. He liked hard rock much more.”

Richard Langlois, the father of Stephane, had a similar view about his son.

“He was the kind of kid who listened,” said Langlois, a mechanic at an iron ore facility operated by the Quebec Cartier Mining Co.

“When you told Stephane to be home at a certain hour, he would. If he was going to be late, he’d always call.”

The two youths were lifelong friends, having grown up together in Fermont, an isolated town of 4,500 in the sub-arctic wilderness 300 km north of Sept-Iles. The boys graduated from Fermont’s high school last year, an event the two families celebrated together. A year ago, the two went off together to study science at a junior college in a Quebec City suburb. Although both Michael’s and

Stephane’s fathers expressed anxiety about sending their sons so far away to study, neither had any hint that anything might be troubling the boys. Michael shared an apartment in Quebec City with his two older brothers, also students at the college. Stephane lived on his own. “Everything appeared to be going

well for both of them,” claimed Christian Côté. Steve Dallaire’s situation was a little more difficult. He lived with his mother, Francine Emond, in Labrador City while his father worked in the Lac St-Jean region far to the south. Describing her son as “firstclass,” Emond last week said she never had any serious problems with him. At the same time, however, she did admit that he had started to miss classes at the junior college in SteFoy, another Quebec City

suburb, where he was enrolled in a social science program. More ominously, he was also known to have been upset by the suicide last May of his best friend, who killed himself in a fit of remorse over Cobain’s death. Of the three youths, it was Dallaire who appeared to be most under the influence of Cobain. “There are notations in the journal that all three were distressed by the death of

Kurt Cobain, although Steve Dallaire was more distressed than the other two,” said Lawrence. Still, there was no evidence to support the view that Dallaire led his two companions into a bizarre suicide pact. The affair began, in fact, when all three cut classes in Quebec City to attend a rock concert in Montreal on Sept. 11. They travelled to the city to catch three groups—Napalm Death, Obituary and Machine Head—at the Spectrum, a popular rock venue. The bands are leading exponents of a brand of hard rock known as “death metal,” the loudest, most extreme, most abrasive form of heavy metal music. “All of these groups glorify death,” said Geneviève Borne, a veejay at Montreal’s rock video TV station, Musique Plus. “There’s nothing romantic or melodic about their music, and you can’t often hear the lyrics because of the heavy guitar. But they’re becoming tremendously popular because they’re so explicit in their gory details. I think kids like them for the same reason they like horror movies. It’s the shock value.”

Borne dismissed the view that the death metal show might be somehow linked to the suicide pact that was consummated in British Columbia, and she is probably right. But it is also true that the live show at the Spectrum was the last ever seen by the three friends. It can have done little to dissuade them from pursuing their grim purpose. 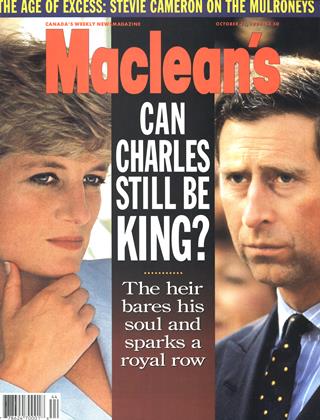