Exposure of an extramarital fling with model Donna Rice stopped Democrat Gary Hart’s promising run for the U.S. presidency in 1987. A reputation for womanizing, and an old affair with the bottle, cost Republican John Tower the post of U.S. defence secretary in 1989. And Republican Senator Bob Packwood of Oregon is still waging a rearguard fight against a Senate inquiry into accusations that he made sexual advances towards numerous Capitol Hill women.

By comparison, President Bill Clinton, who faced down an account of adultery by cabaret singer Gennifer Flowers early in his 1992 election campaign, appears to be protected by Teflon against persistent and increasingly detailed reports that he pursued a sexually promiscuous lifestyle at least until he assumed the presidency in January, 1993.

From the beginning of Christmas week until the eve of Valentine’s Day, accounts alleging a libidinous extramarital Clinton love life have spread. However dubious some of the sources may be, the stories feed gossip that erodes public trust in the President. The latest allegations involve an Arkansas woman, Paula Jones, who told reporters last week that Clinton asked her for “a type of sex” in

an Arkansas hotel room in 1991. Jones— whose claims were denied by the White House—said she met Clinton at the request of an Arkansas policeman, but that she rejected the overtures and left the room within 20 minutes. Jones is only the most recent of several women who claim that Clinton propositioned or had sex with them. In addition, state troopers who guarded Clinton in Little Rock swear that they often helped to arrange such meetings. They describe relations between Clinton and his wife, Hillary, as sometimes profane and quarrelsome. And they say that the First Lady herself once carried on an affair with Vincent Foster, her Little Rock law partner and later a White House counsel who killed himself last July as controversy was beginning to swirl around the Clintons’ financial dealings in Arkansas.

The president’s sex tangle is known in some Washington circles as “Fomigate.” The term was popularized in a February article by Sam Smith, editor of The Progressive Review, a Washington newsletter (circulation 1,500) published under the masthead slogan “Bucking the system since 1966.” Smith’s article decries the dearth of attention to what he describes as Clinton’s irresponsibility,

deception and abuse of power. “There’s an incredible level of denial around here,” Smith said in an interview. So intense is the prevailing desire to see Clinton succeed as President, he added, that “the atmosphere is something like Peter Pan when they say, ‘If you stop clapping, Tinker Bell will die.’ ” Columnist Sally Quinn, writing in The Washington Post, speculated that “there is a reluctance to actually confront the question of a president’s past transgressions for fear that will make them true.”

Both the White House and some major American media have questioned the motives and veracity of the accusers— noting, among other things, that the troopers were advised by Cliff Jackson, an Arkansas lawyer and an Oxford classmate of Clinton who has spent two years digging up embarrassing information about him. Shortly before Christmas, Hillary Clinton publicly denounced “these outrageous, terrible stories” about her husband. The President himself declared on Dec. 22 that “we did not do anything wrong” on the question of abusing his power. Asked about reports that he had offered a job or jobs to Arkansas

troopers to buy their silence, he responded: “That absolutely did not happen.” But there were no official denials of other specifics, including that he continued extramarital sexual encounters at least until shortly before entering the White House—and months after he indicated publicly that any such behavior was a thing of the past.

The Fomigate story broke six days before Christmas on CNN, at much greater length in the next two days in the liberal Los Angeles Times and the conservative American Spectator, a monthly published in the Washington suburb of Arlington, Va. Based on reporting in the wake of the Gennifer Flowers case, both the Times and the Spectator quoted four Arkansas police officers who had served Clinton. Two of the troopers wanted their names withheld; the others, Larry Patterson and Roger Perry, signed affidavits to support their statements and said they decided to speak to the media without reward. They had earlier tried in vain to interest publishers in a book. (Last week, Patterson and Perry attended an American Conservative Union conference in Washington with Jackson and another Little Rock lawyer, Lynn Davis. Together, they announced that they had set up a fund to help people who “blow the whistle” on official wrongdoing and face the possibility

of losing their jobs or running up legal bills.)

Details in the two recent accounts—the Times’ report ran to more than 4,300 words, the Spectator’s to almost 13,000—were graphic. One trooper said that he used a security camera to watch a woman engage in oral sex with Clinton in a car on the state mansion grounds. The troopers described setting up dates at Clinton’s behest, driving

him to and from such meetings and keeping watch at the governor’s mansion to alert him if his wife’s bedroom lights went on. Apart from earlier claimants to sexual encounters with Clinton, including Flowers and Sally Perdue, a former Miss Arkansas, the troopers named other women who they said were sim-

ilarly involved. The § Times said that two of | those women denied it.

In a check of incompi plete state records of c calls from Clinton’s car phone and hotel rooms between 1989 and 1991, the daily’s reporters found 59 calls to a woman who had denied an improper relationship.

The troopers’ stories delved into other aspects of Clinton’s private life while serving as governor from 1979 to 1981, and again from 1983 until he left for Washington in January, 1993. Both Clintons were portrayed as given to profanity and, on occasion, to violent quarreling. Even Socks, the Clinton cat, is not spared. According to writer David Brock in the American Spectator, the chores of the governor’s security detail included cleaning

up after Socks, “who apparently retches with alarming frequency.”

More serious, although ambiguous, are reports that smack of coverup attempts. Three Arkansas troopers say that, during the time they were talking to reporters, they were called by a former supervisor, Raymond (Buddy) Young. One recalled Young warning him of “dire consequences.” Young, appoint-

ed by Clinton last July to a $120,000-a-year federal job in Texas, has said he merely told the troopers that what they were doing was “a disgrace to security people.” Separately, the London Sunday Telegraph last month quoted Sally Perdue, now 55 and living in St Louis, Mo., saying that a man who claimed to represent high-level Democrats warned her during the 1992 campaign that “he couldn’t guarantee what would happen to my pretty little legs” if she spoke out about her claim to intimacy with the then-governor in 1983.

A case that received no American media at-

tention at the time, or since, the victims say, involved three break-ins at offices of the American Spectator last September when writer Brock was still working on his story. Within three weeks, there were two break-ins through a wall of the seventh-floor Arlington office and one into the journal’s Manhattan apartment bureau. Drawers, files and locked cabinets were rifled. Some equipment was taken in Ar-

computers and petty cash were untouched; nothing at all was missing in New York City. Assistant managing editor Chris Caldwell says carefully that “we know nothing except our offices were broken into for the first time in our 27-year history.”

Does Fomigate matter for Clinton, as Watergate did for Richard Nixon 20 years ago? At the least, notes veteran pundit Quinn, it has generated an undercurrent of gossip and TV comedians’ jokes that reinforce the President’s “slick Willie”

image and envelopes him, polls show, in a cloud of mistrust. But has the public grown more tolerant of sexual adventures? Clinton himself seems to believe so. Only last week, during a visit to a General Motors factory in Shreveport, La., he openly if obliquely alluded to a longtime interest in the opposite sex. Telling of a pickup truck that he owned in the 1970s, the President recalled that “I had Astroturf in the back; you don’t want to know why, but I did.” Nowadays, perhaps, political Teflon is a better protection against scrapes, bruises—or more serious damage. □ 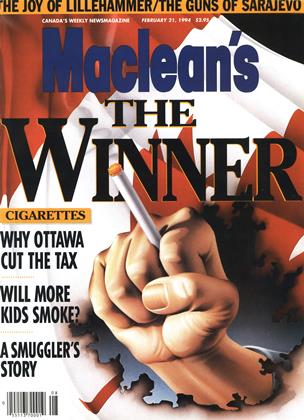