'It’s all downhill for the guy who tries to be honest. He’s stuck with the option of going bankrupt or going underground.’

With his white beard, he looks like an Old Testament prophet, and may soon start acting like one. David Anderson, 56, who as minister of national revenue is in charge of collecting the $116 billion in federal taxes and excise duties that will keep this country more or less afloat in the next 12 months, is an angry man. He knows that no matter how de voutly Finance Minister Paul Martin may believe that any taxes he slaps on Canadians will automatically produce extra federal revenues, it ain’t necessarily so.

“The most flagrant, clear, outrageous unfairness of the system,” he told me recently during an interview at his Vancouver office, “is that some people aren’t paying tax at all. I’m not talking about the top-end characters like the Irvings with their offshore tax havens. I mean those people who are trying to compete in business with others who are simply not paying their taxes. In the jewelry trade, for instance, many items are smuggled across the border to avoid the special 10-percent excise tax, and once in the system also avoid the GST, sales taxes and even personal income taxes. The honest Canadian jeweller—and three-quarters of them are—is faced with very, very unfair competition.” Citing this example of the most obvious unfairness he has uncovered in the three months he has occupied the portfolio, Anderson is particularly upset by the growing notion that Canadians feel so overtaxed that joining the underground economy has become an excusable, Robin Hood-like act of defiance. (An Ernst & Young study released last week estimated that the underground economy now accounts for transactions worth more than $100 billion a year, or at least 15 per cent of Canada’s gross national product)

“The government,” Anderson says, “is not going to break its neck on a nickel here and a dime there. We’re not going after the guy shovelling snow for a $20 bill or the kid who comes in to babysit. But many businesses are

doing the same thing on a dramatically higher scale. When you start examining the jewelry, restaurant, auto repair and renovations trades, where so much of the evasion occurs, the tables are tilted and it’s all downhill for the guy who tries to be honest. He’s stuck with the option of being driven to the wall— going bankrupt—or going underground.”

It was, of course, the GST that gave the biggest impetus to the burgeoning underground economy, and it’s that hated tax that the government has pledged to replace within two years. Anderson believes that equally important to finding an acceptable alternative (probably a national sales tax) will be harmonization of the collection function between Ottawa and the provinces, which would save at least $180 million a year.

Anderson has added some impressive muscle to his deparment’s auditing fiinctions. For every dollar invested in audit programs, Anderson expects to generate $5 to $8 in tax revenues. Some provinces, such as Quebec, demand that individual tax assessors recover missing revenues worth five to eight times their annual salaries (a figure that averages out to $726 for every hour spent on sales tax audits, $248 an hour on income tax reviews

and $696 per hour on corporate returns in that province). But Anderson is all too aware that merely hiring more enforcement officers won’t solve the problem. “At some point,” he admits, “you have to depend on people changing their cultural or ethical views. I estimate that about 15 per cent of Canadians are cheating, and many of those are at the lowend of the economy who we’re not going to go after. The tax system would have collapsed long ago if we didn’t have at least 85 per cent of the population believing that they must pay their taxes. I guess part of the exercise is to point out to those who are getting fed up that the old values are still there. People said that Jean Chrétien was yesterday’s man. Well, yesterday’s values have come back into fashion with him.”

The revenue minister has been a Chrétien fan for a quarter of a century. “He gave me the West Coast National Park,” recalls Anderson, an ardent environmentalist. “I was a Liberal backbencher [in 1970] and he was the minister whose responsibilities included national parks. I asked him to visit the west coast of Vancouver Island, and when he did, he had brought no boots to walk into the wilderness with me. He borrowed my mother’s, which were a full size too small for him, and hiked—or rather limped—along with me all day. At one point, we arrived at a little dock on Nitinak Lake and there was Charley Edgar carving a dugout canoe, and I said to myself, ‘God, this has got to be my day.’ I accidentally brought the minister of Indian affairs to the only dock in the world where an Indian is chipping a dugout canoe! But then, the fog started to roll in, the mist was rolling, the rain was rolling and we were sitting around a sputtering little campfire, and I thought, This is awful, Jean will never believe this should be a park. This is just a grim bit of the west coast.’ But he did it, and now the Pacific Rim National Park is so popular that in the summer the reservations system gets so overloaded it has to be closed for three hours at a time. I was impressed that he took the trouble to come and look and was willing to hear people outside his department.” Anderson remains active in the environmental movement. Last summer, he triggered a national debate with his suggestion that Clayoquot Sound be incorporated into Pacific Rim National Park.

More recently, Anderson dropped his controversial $450,000 lawsuit against Ottawa for having been let go from the Immigration Appeal Board. But he remains a heretic in a sea of political conformists. “I’m a bit of a troublemaker,” he says, “though I’m extremely comfortable with what I call the 4 Ms— Martin, Manley, MacLaren and Massé”— Paul Martin, Industry Minister John Manley, International Trade Minister Roy MacLaren and Intergovernmental Affairs Minister Marcel Massé. “But the country requires a fundamental restructuring,” he adds, “and the strength of the vested interests protecting the existing systems is just unbelievable.”

David Anderson is about to find out how strong they are. 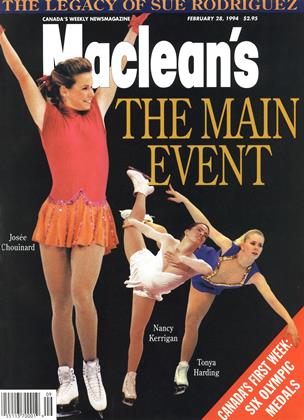