Grace Kelloway was only 41 when she suffered her first spinal fracture. It was a bit of a mystery: all she was doing at the time was turning to speak to a family member while walking up the stairs of her Brampton, Ont., home. More than a year later, doctors finally decided that she had severe osteoporosis, a debilitating disease that makes bones brittle and often afflicts women after menopause. Although it is unusual before age 50, Kelloway suffered an early onset of the disease because her ovaries had been removed at 31; that produced a sharp decline in the female hormone estrogen, which helps premenopausal women to maintain strong bones. As a re suit, she spent much of her 40s wrestling with multiple fractures that frequently left her immobile and in severe pain. Now 51 and taking a daily dose of estrogen, a treatment known as hormone re placement therapy (HRT), Kelloway says she feels fortunate be cause she is able to walk. Still, she avoids a number of everyday physical activities, such as bending over to hug her grandNy* children. Perhaps most frustrating is her belief that the whole ordeal was pre ventable. “I wouldn’t be in the position I’m in now,” she says, “if a doctor had told me about hormone therapy after my operation.”

Kelloway’s generation of women may be the last that reaches middle age knowing little or nothing about HRT. Although it has been available for more than three decades, the number of women receiving HRT has increased steadily since the late 1980s, partly

because of a growing medical consensus that female sex hormones are an effective treatment for a variety of conditions common in women over 50. The therapy can alleviate unpleasant symptoms associated with menopause, such as hot flashes and vaginal dryness, and is now believed to help prevent heart disease and osteoporosis. But some experts maintain that far too little is known about

the long-term effects of HRT to justify its routine use. In fact, the medical community’s approach is fundamentally misguided, they say, because it treats menopause as a disease, rather than a natural aging process. “There is something wrong with the idea that women aren’t OK unless they are taking a pill,” asserts Jerilynn Prior, 50, associate professor of endocrinology at the University of British Columbia.

There are nearly five million women in Canada between the ages of 40 and 74, and it is estimated that 10 to 15 per cent of them take replacement hormones. Those numbers will swell as the population ages: in 1996, the first of the baby boomers begin to tum 50, an age when most women have already begun to notice the first signs of menopause. Yet the most rigorous, longterm trials of HRT have yet to be completed. That has left many women uneasy, especially those who remember that the use of estrogen in the 1960s and early 1970s resulted in a nine-fold increase in uterine cancer. Al-

though it was soon discovered that the addition of progestin, another female hormone, effectively blocks such cancers, doctors and their patients were leery of HRT for many years afterward.

The majority of recent, positive reports on HRT come from follow-up studies of women who chose to take hormones on their own, not as part of a controlled trial. The first widely approved study of HRT—tracking 140,000 American women over a period of

14 years—was begun only last year by the Bethesda, Md.-based National Institutes of Health, and is not due to issue even preliminary findings for another five years. As a result, a generation of women may be encouraged to take replacement hormones without full knowledge of their side effects. “The baby boomers will be the guinea pigs,” says family practitioner Jean Marmoreo, 50, who advises a menopause support group run by Womens’ College Hospital in Toronto. “Their daughters will be the ones who benefit most from what we learn about HRT in the next 20 years.”

With so many unanswered questions, why risk taking HRT at all? Part of the answer lies in the experience of women like Kelloway. Estrogen has undoubted benefits for those who may be at risk of osteoporosis, which afflicts one in four Canadian women over 50. The hormone helps slow the loss of bone mass and stimulates the growth of cells that build bone. Only women with active genital or breast cancer, or undiagnosed vaginal bleeding, should rule out HRT, says Timothy Murray, an endocrinologist who heads the bone and mineral group at the University of Toronto. “HRT is the most important method of preventing osteoporosis in women,” says Murray. “Exercise and calcium can help, but estrogen is responsible for preventing 60 per cent of the fractures that women would otherwise experience.”

Like many doctors who prescribe HRT, Murray’s biggest problem is convincing women to take it on a long-term basis. To prevent osteoporosis, HRT must be started within five to 10 years of menopause and continued for at least a decade. But the cyclical doses of hormones that most doctors now favor—estrogen for 25 days, progestin for the last 10 to 12 of those days, and then nothing for five days—usually result in the resumption of a menstrual period. “Most 60year-old women do not want to bother with that,” Murray says.

Other women—and their doctors—worry about the risk of breast cancer. Some American studies have concluded that women on HRT are no more likely to contract the disease. On the other hand, a European study that used high doses of synthetic estrogen found a 30-per-cent increase in risk after 15 years of use; as a result, some doctors believe that patients with a family history of breast cancer should avoid estrogen until more is learned about its effects. HRT supporters, however, note that most North American women on hormones take naturally produced estrogen, in relatively low doses. “HRT is not for everyone,” Murray allows, “and women should discuss the decision with their doctor. But they should be asking whether there is any reason not to take hormones.”

Some of the biggest boosters of the therapy are doctors who believe that it can help reduce heart disease. In Canada, heart dis-

ease kills four out of 10 women, outranking deaths from breast cancer by a factor of eight. Some research, notably a Harvard University study of North American nurses published in 1991, has concluded that estrogen reduces heart disease in postmenopausal women by as much as 50 per cent. Some researchers believe that estrogen helps break down LDL-cholesterol, the “bad” fatty substance that can clog the heart’s arteries; when estrogen declines, blood levels of LDL-cholesterol rise. “Heart disease used to be considered a man’s disease, but it is the number 1 killer of women,” says Lorretta Daniel, 37, a cardiologist at Toronto Hospital. “In a patient with heart disease, or at risk of heart disease, who is suitable for HRT, hormone therapy is a very good choice.”

But newly menopausal women rarely hurry into their doctor’s office with concerns about their bones or hearts. The majority are seeking relief from acute symptoms of what is often referred to as “the change”— hot flashes, night sweats and vaginal dryness that can make sexual intercourse painful. HRT can alleviate all of these, and, according to Morrie Gelfand, chief of obstetrics and gynecology at the Jewish General Hospital in Montreal, the quality of most women’s lives would be improved by taking HRT after menopause. Gelfand says that 80 per cent of his own patients take the hormones for at least a year, up from 25 per

cent just five years ago. “Once the shortand long-term benefits are explained to them, they have no trouble taking hormones and staying on them,” he says. Gelfand compares the social implications of HRT to the revolution that accompanied the widespread use of the birth control pill in the 1960s. “For the first time,” he says, “a large number of women will have 30 years of better health after menopause.”

Neri Bloomfield, the president of a Montreal charitable foundation, was a pioneer when she began taking HRT in 1965 after she had a total hysterectomy. Now 69, Bloomfield is monitored regularly by her family doctor and a gynecologist, and she undergoes an annual mammogram. ^

Her sense of well-being, she says, has been enhanced by the therapy, and she is content to stay on it for the rest of her life. “I don’t look my age and I don’t feel my age,” she says.

“There is nothing so gracious about aging naturally.”

Not all women agree. Janine O’Leary Cobb, a Montreal sociologist, publishes a newsletter about menopause that has subscribers in a dozen countries. Too much remains unknown about the effects of HRT,

Cobb says, to justify its long-term use for most women. “For instance, I have no family history of breast cancer,” Cobb explains. “Fm 60, and that means my risk of getting breast cancer is one in 14. If I take HRT

for more than five years, it rises to one in 11—that’s significant.” Women whose menopausal symptoms are not severe, she says, should first consider other ways of improving their health, such as exercising more and reducing alcohol consumption. Some doctors agree with Cobb. According to UBC’s Prior, research is still so inexact that it remains possible that estrogen could actually help promote heart disease. In some cases, estrogen can raise blood pressure and lead to weight gain, two factors linked to heart disease.

For some women, the very idea of taking hormones to alter the natural course of aging is frightening. Ruth Gale, 57, a volunteer who works with menopausal women in Winnipeg, says that her own menopause was inconvenient at times, but that she viewed it as a normal process that did not need “fixing.” Says Gale: “I had warm flushes, and sometimes I felt I had left my memory at the top of the stairs, but it did not ruin my way of life.” Gale stays fit by taking walks near her Winnipeg home and eating carefully, but not “watching every mouthful.” It is normal for waists to thicken and breasts to droop. “Aging is a rite of passage,” she says, “not a scary or threatening thing.” In the raging hormone debate, many Canadian women can only envy Gale’s peace of mind. 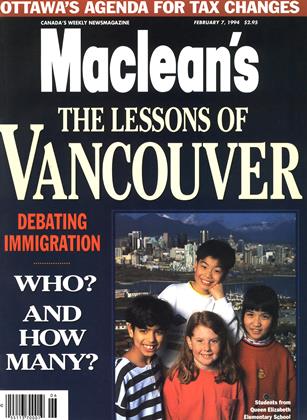