Mascara, lipstick, high heels. Anger, self-loathing, a desperation to please men. On the evidence of two CBC TV programs airing back to back on March 13, the passage of contemporary girls through their teens is marred by an obsession with appearance and, be neath the dolled-up face of young womanhood, a fractured sense of self. Much of Talk 19, a one hour follow-up to the engaging 1990 docu mentary Talk 16, is a depressing litany of young-female cornplaints. The same five young women, now 19, talk about disre spect and abuse from boys, dissat isfaction with-even contempt for-their own looks and a convic lion that only beautiful women get what they want. At one point, Lina, whose tale of losing her virginity in a poison-ivy patch was one of the highlights of Talk 16, laments that she will be "stuck in nerd hell" until she gets plastic sur gery. Using fingers to adjust her features, she demonstrates how she hopes to alter her face. The Diaiy of Evelyn Lau, meanwhile, is a drama based on the true story of the Vancouver adolescent who ran away from her abusive par ents and drifted into prostitution.

Stunningly portrayed by newcomer Sandra Oh, Lau explains to her psychiatrist that hooking has become an addiction—“It’s all this stuff about how great you are—beautiful—it gets to me.”

As The Diary of Evelyn Lau opens, the title character is a perfect daughter, an awkward, bespectacled, 14-year-old high achiever. Her Chinese-immigrant parents are intent on finding fault with her nonetheless. Lau’s mother (Shirley Cui) terrorizes the girl with slaps and regular weigh-ins on the bathroom scales—“You’re fat like a pig,” she barks. Lau’s affectionate but passive father (Harrison Liu) rebukes her for wanting a career as a writer. Based on Lau’s 1989 book, Runaway: Diary of a Street Kid, the two-hour drama chronicles Lau’s flight from her family,

her time in group homes, her introduction to prostitution and her self-destructive binges with drugs. The program also traces Lau’s struggle to heal herself with psychoanalysis and writing—she is now an acclaimed poet and fiction author with one best-seller, Runaway, to her credit.

Oh’s portrayal of Lau’s metamorphosis is

uncannily vivid. In fact, the 22-year-old actress, a first-year student at the National Theatre School in Montreal when she auditioned for the role, won the award for best actress at the Festival international des programmes audiovisuels in Cannes on Jan. 12. Oh is deeply affecting early on as a smart, sad innocent who is totally devoid of street smarts. And the actress is utterly convincing as her character becomes a drug-addled prostitute, a master of fakery who despises the pathetic men she services.

Directed by Sturla Gunnarsson, Diary is rivetting, stylish television. Gunnarsson, whose credits include Final Offer, a documentary about the inception of the Canadian Auto Workers union, and Diplomatic Immunity, a feature set in war-tom El Salvador, infuses the

drama with atmosphere and tension while avoiding the excesses of the movie-of-theweek genre. The early scenes focusing on Lau’s family have a misty, other-worldly light, conveying the girl’s fear and alienation. And as she begins hooking, often zonked out of her mind, the endless rain and images of highway overpasses and urban wasteland create an oppressive gloom. Jonathan Goldsmith’s sound track is more noise than music, but the strange, echoing metallic sounds have a powerful emotional effect. They are a welcome substitute for the trite, manipulative scores that usually accompany TV drama. Occasionally, Diary slips into simple-mindedness, especially in its portrayal of social-service workers. But other minor characters, including Nicholas Campbell’s former boy-prostitute and Kenneth Welsh’s seedy drug addict, are memorable.

Talk 19, made by Janis Lundman and Adrienne Mitchell, is a less accomplished piece of film-making, but it is still interesting to check in on the lives of the five girls. Now on the brink of adulthood and independence, they are nervous about what lies ahead. Aspiring actress Rhonda worries that she will not achieve her dream—and that she is unattractive to men. Lina, who suffered sustained harassment from a group of boys during her final year of high school, confesses, “I’m really scared of the world.” Astra, the selfdescribed “demon seed” of the earlier documentary, smiles approvingly as her rock ’n’ roller boyfriend says, “It makes me look good being with her—better for the image thing. It’s very good to be seen with a gorgeous blond.” And former private-school girl Erin expresses confidence that she will marry a rich man able to bankroll her cosmetic surgery when she is middle-aged.

Only Helen seems truly comfortable in her skin. The Korean-Canadian, now a first-year pre-med student, seems to appreciate that her value rests in more than her looks. She complains that strange men often accost her at the gym, and that the boys she dates are drawn to her for all the wrong reasons. “I’d love to get to know a guy on the phone,” she says, “and have him totally fall in love with me from listening to my voice, and how it sounds and what I say, and not how my lips look or how my body looks.” It’s a sad comment on the culture of superficiality—and on the sexism that continues to beset females. 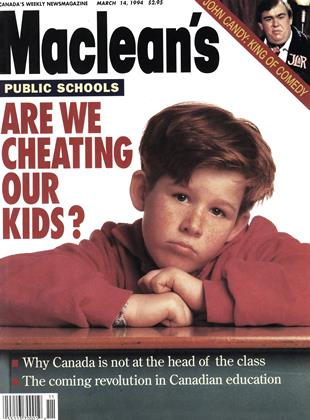