In 1976, Johannesburg native Andrew Orkin packed his belongings and left South Africa to begin a new life. He became a Canadian citizen, studied law at Montreal’s McGill University and eventually opened a practice in Ottawa, where he specializes in native rights. Now, 18 years after his arrival in Canada, Orkin, 41, is preparing to revisit the land of his birth. As co-ordinator of a seven-member delegation

sponsored in part by the federal government and the Canadian Bar Association, he will fly to Johannesburg this week as an official observer of an event that would have been unthinkable a few years ago: South Africa’s first nonracial, democratic elections. “The real emotion and history is being made by South Africans themselves,” says Orkin, the gentle accent of his homeland still distinctive. “The rest of us are neutral onlookers—we have been asked to bring our eyes and our ears.”

But as Orkin and his colleagues prepare to don the blue jackets that will be worn by some 3,000 international observers, including about 100 Canadians, violence and political turmoil threaten the April 26 to 28 elections—leaving many South Africans uneasy. “Their hearts are in their mouths,” says Orkin, “and so are ours.”

While the world watches and waits, Canadians from all walks of life are trying to ease

Canadian governments have led the way in isolating Pretoria, pushing for sanctions against the apartheid regime and demanding voting rights for its 30 million blacks.

With that goal in sight, Canadians are playing a major role in South Africa’s transformation. “Canadians are doing a great many things, and they are doing them well,” says former senior federal bureaucrat AÍ Johnson, 70, who is now helping to train future black

South Africa’s painful march to democracy. Their efforts are part of a long Canadian tradition. When Prime Minister John Diefenbaker spearheaded the drive to expel the republic from the Commonwealth in 1961 because of its racist policies, he expressed hope that it would one day return to the international fold, declaring that “there will always be a light in the Commonwealth window.” Ever since,

politicians and civil servants in Johannesburg. “I am told that the Canadian programs are the envy of the donor community.”

In December, Foreign Affairs Minister André Ouellet announced a $2.5-million package to support South Africa’s transition to democracy. That contribution is in addition to previous commitments of $12 million through the Canadian International Development Agency

and a further $10 million through the Ottawabased International Development Research Centre for educational reform and economic policy formulation. Another $4 million is earmarked for black entrepreneurs. “There are lots of tax dollars that go to questionable use in Canada,” says Rick Jackson, international affairs director for the Canadian Labour Congress (CLC), which has been a long-standing supporter of the anti-apartheid struggle. “But from a security point of view, when what might have been averted here is a full-scale civil war, the money that has been spent on democratic development in South Africa is well worth it.” Indeed, the potential for uncontrolled violence was underscored again last week when more than 50 people were killed in and around Johannesburg during pitched battles between supporters of the Zulu-based Inkatha Freedom Party, which is boycotting the election, and Nelson Mandela’s African National Congress (ANC).

Arguably the most important Canadian in South Africa is Ronald Gould, Elections Canada’s assistant chief electoral officer. Even a partial list of countries in which Gould has served as an election observer or adviser reads like a gazetteer: Albania, Bulgaria, Cambodia, El Salvador, Guyana, Honduras, Kenya, Mongolia, Nicaragua and Zambia. He first visited South Africa as a consultant in March, 1993. Later, he was asked to advise an independent commission I on political violence headed by South African Justice Richard Goldstone. During the negotiations that led to South Africa’s interim constitution, Gould helped draft the new elections laws. The proclamation of those laws last fall led to the creation of the Independent Electoral Commission (IEC) to ensure that the vote is free and fair.

By then, Gould had returned to Ottawa to work on October’s federal election. But in January, he learned that the IEC—which has 11 South African members—had chosen him to be one of five international commission-

ers. The others are from the United States, Denmark, Zimbabwe and Eritrea.

Until the election results are final, Gould, 60, is living in a downtown Johannesburg hotel across from the IEC’s high-security ninestorey headquarters. Although the location is convenient, there are drawbacks. “This is a high-crime area, so other than during the daytime I have to have armed security just to

cross the street,” he explains. Typically, Gould and several other commissioners gather every morning at 8 a.m. with IEC staff members responsible for electoral operations. Then, he meets with a special task force that is overseeing the setup and policing of polling stations—there will be between 7,500 and 8,000 throughout the country—before heading into “one meeting after another on various aspects of electoral management

and administration.” After he returns to his hotel room—usually around 10:30 p.m.— Gould speaks by phone with Elections Canada and Foreign Affairs officials in Ottawa, updating them on the latest developments.

Widely acknowledged to be the most experienced elections expert on the IEC, Gould has been instrumental in hammering out election logistics and designing the voting process, right from the moment a voter enters the polling station and is stamped with invisible ink as a safeguard against fraud. But the commissioner is quick to give credit where credit is due. Assisting the IEC are about a dozen Canadian experts seconded from Elections Canada and provincial returning offices. Already, they have done everything from training electoral officials to designing a voting program for disabled people. “I really wonder whether the South African election would have been possible without the contribution of the Canadians,” Gould says.

As it is, Gould faces many frustrations—not the least of which, in his view, is the “unrealistic” timing of the election. Ideally, he explains, South Africa would have waited at I least a year after establishing the § IEC before staging its first multira£ cial vote. Instead, the IEC must con« tend with a four-month deadline. “We are really playing brinkmanship every day in this place,” Gould told Maclean’s. “I think we will ultimately be able to pull this election off—but it certainly will be in the eleventh hour, and it certainly will be flawed to some extent. There is no way that you can pull off an election of the quality that should be carried out in this country given the time frame.”

As Gould and the IEC’s advisers frantically sort out the final details, Canadian pre-election monitors are watching to ensure that vot-

er education programs and political rallies throughout South Africa are free of intimidation and violence. Sister Hazel Campayne, a Roman Catholic nun who hails from Guyana but now lives in Toronto, is one such individual. Based in King William’s Town in the Eastern Cape, near the black homeland of Ciskei, Campayne serves on the Ecumenical Monitoring Program as a representative of the Canadian Council of Churches. “We monitor rallies to look at how things are developing and whether there is intimidation, how free the process is and so forth,” Campayne says. “It is fascinating.” The list of other Canadian monitors includes a five-member delegation from the Canadian Auto Workers union (CAW) and the Canadian Union of Public Employees, who left for South Africa on March 25 to assess the pre-election climate in the black townships around Johannesburg. Said delegation member Jef Keighley, a CAW representative from Vancouver: “People are desperate that the process work because the consequences of it not working are not to be contemplated.”

The National Action Committee on the Status of Women (NAC) is also sending monitors to see firsthand how women are affected by the election campaign. “If the election is to be fair and free, then the participation of women

is essential,” says NAC president Sunera Thobani. She added that women in rural areas are especially subject to intimidation by rival black organizations and right-wing whites because, in many cases, their husbands live and work elsewhere. In December, Thobani travelled to South Africa on a fact-finding mission

gation that Canadian observers could help to deter violence during the election period.

In addition to an official team of 15 observers led by Christine Stewart, the junior minister responsible for Latin America and Africa, 35 Canadians with the United Nations observer team and five with the Commonwealth observer mission, more than 40 observers have been accredited by the IEC as representatives of Canadian nongovernmental organizations. They include the Canadian Council of Churches, the CLC, the Canadian Bar Association and OXFAM-Canada, which is sending 20 observers to strife-ridden Natal province. The OXFAM delegation includes such people as former B.C. premier Dave Barrett and journalist Doris Anderson. Nancy Gordon, I who works for CARE Canada in Ot| tawa, will travel to the black home| land of QwaQwa as an observer. I “Canadians have taken a real interest in South Africa for a long time,” 5 says Gordon. “The notion of being there at such a historically important time is really exciting.”

On that point, AÍ Johnson is in full agreement. During a distinguished career in the public service, Johnson served as deputy finance minister in Saskatchewan, assistant deputy finance minister in Ottawa, constitutional adviser to Pierre Trudeau, Treasury Board secretary, deputy minister of national welfare and president of the CBC. But the chance to help train future South African leaders, he says, is unlike anything he has done before. “I have had a range of experience,” Johnson says, “but to make some small contribution to the birth of a nonracial democratic system in South Africa is kind of a climax.” With funding from Ottawa, Johnson’s program is helping to train candidates for the civil service, most of them ANC members. As part of their studies, they have been sent to Zimbabwe and Namibia, countries that have both been through the transition to majority rule. A further 30 will spend time in Canada in April. In addition, three of the ANC’s nine nominees for provincial premiership in South Africa travelled to Saskatchewan, Ontario and New Brunswick in February, where they sat in on cabinet and caucus meetings.

The task ahead is awesome. “All of the imperatives of government will change, with the shift in power from whites to blacks,” says Johnson. But as one who is familiar with the new generation of South African leaders, he says people need not fear a radical approach—or, as some conservatives have predicted, the rise of communism. “The leaders will behave as responsibly as they can,” says Johnson, adding that the new government “will have to manage expectations as well as manage massive changes in policy.” For all the help they are receiving from outsiders, that is something South Africans will have to do on their own. 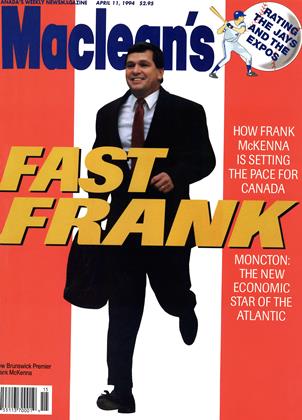