It was undoubtedly Preston Manning’s worst week since he and 51 other Reform party MPs arrived in Ottawa five months ago. It began with the Reform leader squinting into a phalanx of television lights in the foyer of the House of Commons, fending off questions about an internal party spat over a $31,000 annual expense account provided by the party for, among other things, the purchase and pressing of Manning’s clothes. Next came a marathon private caucus session in which Reformers thrashed over the way that the party’s executive—with Manning’s blessing—had publicly rebuked Calgary West MP Stephen Harper for daring to criticize Manning’s allowance. Then, for the rest of the week, the Reform leader had to endure partisan jibes in the Commons, including one from Prime Minister Jean Chrétien who responded to a Manning question on the government’s economic directions by stating mischievously that, ‘We’re not about to change suits everyday.” For Manning, who came to Ottawa vowing to bring a new era of principled debate to Parliament, the hubbub over his haberdashery was an unwelcome diversion. Lamented Manning in an interview with Maclean’s: “Our

Despite the recent wave of negative publicity, several Reform MPs returned to Ottawa from their Easter recess to report that their constituents support their low-key tactics in Parliament. MP Jack Frazer (Saanich-Gulf Islands) says the typical advice that he received was along the lines of: “We think you should continue to take the high road and do what you said you would when we voted for you.” Others, however, got an earful from frustrated voters back home. “I haven’t heard you really say very much down there in Ottawa,” Milton Wilson told Okanagan Centre MP Werner Schmidt at a town-hall meeting in Kelowna, B.C. “Maybe it’s time to take the gloves off and be a little more aggressive.” Agreed Steve Sellers: ‘You’ve been elected to represent us and we’re not getting anywhere.” In fact, Reform has made several moves lately to address such shortcomings. Last week, the party hired Jane Sutherland—a onetime adviser to former Tory House leader Harvie Andre—to help MPs improve their performance in question period. Also, a Queen’s University academic, Darryl Reid, has been brought on board as the party’s new research director to help the party better exploit the parliamentary resources available to them. Still,

main reason for being here gets completely wiped out by this type of stuff.”

The internal dispute over Manning’s expenses is just one of the challenges facing the party as it comes to terms with Ottawa’s peculiar political culture. Reform’s lackluster performance in the daily question period as well as significant gaps in several major policy areas have left the party playing a frustrated second fiddle to the Bloc Québécois in the House of Commons. As well, plans to expand into Quebec and broaden the party’s appeal among voters has many members concerned that the result will be a wateringdown of some existing policies.

Some worry that Reform, founded seven years ago as a voice of Western alienation, has lost that focus in its eagerness to gain national support.

Those are not the only areas where some of the party’s most fundamental beliefs are under attack. The haste with which the party’s Calgary-based executive chastised Harper for his suggestion that Manning should provide receipts for his expense account seemed starkly at odds with a party that promotes itself as the most open—and fiscally responsible— on the federal scene. Such apparent contradictions are wrenching for any political party. They are also inevitable. Said Reform MP Bob Ringma, “We are growing up.”

So, for that matter, is the 54-member Bloc Québécois caucus, most of whom are also new to Ottawa. But observers agree that Bloc MPs have been far more aggressive—and effective—performers in the House. Reform has been true to its pledge to bring decorum back to parliamentary proceedings after years of highly partisan political behavior. Their attacks on the Liberal government have been less shrill than the Bloc’s. But they a, have also been less focused. Too often, 1 Reform MPs have been slow to respond s to major issues, with the result that the 5 party’s views do not always travel far beyond Parliament Hill.

the party’s lack of clear policy in such areas as foreign policy and telecommunications has left it vulnerable. But MP Ray Speaker, of Lethbridge, Alta., says that policies will be better defined over time, and that members should be patient and learn to walk before running by avoiding truly adversarial politics until they have a better grasp of the issues through work in the House and in committees. Said Speaker: “We have a job to do first”

Having won 46 of the 58 seats in Alberta and British Columbia in last October’s election, Reform’s caucus is overwhelmingly dominated by westerners. The party is now looking seriously at ways to increase its national appeal, including the difficult challenge of trying to expand into Quebec. Chris Courtemanche, a francophone former aide to Tory cabinet minister Pierre Blais, was hired earlier this month as Reform’s Quebec organizer. Manning rejects suggestions that some of the changes, aimed at attracting women and ethnic voters, will dilute party policy on such issues as immigration and the constitution, arguing that this did not happen after party members agreed to run candidates in

Ontario and Atlantic Canada in the last election. Said Manning: “This was the story when we expanded out of the West—that we were going to compromise everything to get into Ontario. And we didn’t.”

But according to Tom Flanagan, a University of Calgary political scientist and the Reform party’s director of research until 1992, a recent internal party survey showed little enthusiasm for the changes among the party’s 100,000 members. Manning downplays those findings, suggesting that members are simply weary after waging gruelling campaigns in the 1992 constitutional referendum and last year’s federal election. Adds Manning: “I think the hard core of our membership is determined to build a national party and their goal is to form a national government before the end of the century. We have no choice.”

If that effort is to succeed, Manning and his party must avoid such embarrassments as the disclosures about the leader’s expense account and the media feeding frenzy that followed. In part, the bad publicity was a reaction to the sanctimonious manner Manning adopted last December—when he staged

a photo opportunity on Parliament Hill in order to publicly return keys to the government limousine he was entitled to as a party leader. To some, that holierthan-thou attitude is reminiscent of the New Democratic Party, which has often portrayed itself as a party outside of—and above—the morals of the other mainstream political parties. Flanagan, for one, warns that if Reform’s goal of forming the next government is not realized, “they could get pigeonholed as an NDP of the right.” Manning scoffs at comparisons between Reform and the NDP, declaring: “The way to avoid their dilemma is to obey the cardinal principle of representing where the public’s head is at” On the other hand, it was attempts by the previous Conservative government to appeal to the lowest common denominator that, by his own account, led the 34year old Harper to abandon that party. Harper began active political life as an aide to former Tory MP Jim I Hawkes in the mid-1980s, I but left the party and joined $ Reform at its founding con-

1 he has become arguably g Reform’s most articulate

spokesman after Manning— and, many consider, a potential successor as leader. The first inkling of tension between Harper and Manning came after the announcement of the Charlottetown Accord in August, 1992. Harper came out strongly against the accord a full two weeks before Reform made its opposition to the agreement public. Some Reformers say that action forced Manning’s hand—and that Harper has been regarded with suspicion by the party leadership ever since.

For the time being, however, both Manning and Harper say they want to put any personal differences behind them—and get on with the larger issues at hand. Asked last week if anything about his first five months in Ottawa came as a surprise, the Reform leader returned to one of his favorite themes. “One thing,” he said. “I don’t think the Hill has the foggiest notion how deep the financial difficulty that the country is in. I knew there was a cavaliemess about this, but it does surprise me that it is as cavalier as it is.” For Manning, at least, the main challenge facing Reformers is the same as it has always been: to change Ottawa before Ottawa changes them. 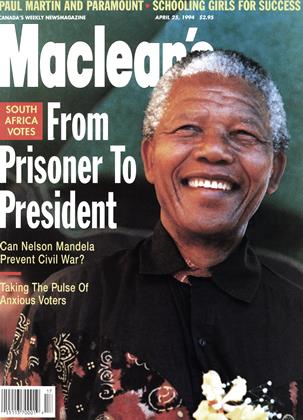