Far from the grand-opening festivities in Windsor, Ont., proposed casinos are raising hackles on two Canadian coasts. The high-stakes dealings in Halifax and Vancouver:

On the face of it, the decision seemed surprising. After all, an all-party legislative committee reported in February that Nova Scotia wasn’t ready for commercial casinos. Rather than boost tourism, the committee concluded, casinos could bring crime and harm the province’s image as a tranquil travel destination. The committee, which held hearings throughout the province, noted that a June, 1993, poll showed that 58 per cent of Nova Scotians opposed casinos. But when John Savage’s government announced last month that it would license casinos in Halifax and Cape Breton, it confirmed a deeper truth: the province needs one-armed bandits and roulette wheels to create jobs and shore up its treasury.

Government officials say the two casinos, scheduled to open as early as next summer,

are expected to yield revenues of $40 million to $60 million a year, and create hundreds of new jobs. In Halifax, the casino will resemble the Windsor model—the province takes a “win tax” off the top and splits the profits with the operator. It will take a win tax from the Cape Breton casino, as well, but the rest of the proceeds will go to charities.

While public opposition to casinos has fallen, church and community groups continue to condemn them as immoral. And even such former proponents as social historian Owen Carrigan question the government’s decision to surrender profits to private operators. “If governments are going to get involved in this sort of thing,” he says, “they should do so in a way which brings maximum profit to the community.” For Nova Scotia’s beleaguered government, the benefits more than outweigh the costs.

So far, it is only a vision—a grandiose $750-million Vancouver complex, complete with a 1,000-room hotel, a convention centre, a cruise-ship terminal and, as a central at-

traction, an all-out for-profit casino. The design for the Seaport Centre was chosen over three other proposals for development of a 38-hectare site along Burrard Inlet, owned by the Vancouver Port Corp. But the corporation is still working out details with the successful bidders, Vancouver developer VLC Properties Ltd. and Mirage Resorts Ltd. of Las Vegas. And the proposal has several other hurdles to clear. Most important, under Canada’s Criminal Code, only governments and licensed charities can legally operate casinos. That means the province would have to agree to become a partner in the venture. As well, although city council technically has no jurisdiction on federal property, Port Corp. chairman Ron Longstaffe says that the agency is seeking the city’s approval. Some city council members appear unconvinced. “This town,” says Councillor Gordon Price, “is fortunate in that we never have to say, ‘OK, were desperate, build what you want.’ ”

Vancouver may have a vibrant economy, but the Port Corp. has a problem: it needs a new terminal for the booming Vancouverto-Alaska cruise-ship market and doesn’t want to spend federal money to get it. Without a casino, however, “there will be no project,” says VLC president David Podmore. “We need the casino to pay for the cruise-ship terminal, hotel and convention centre.” The problem for the provincial government is that gambling is a thorny public issue on which it must “tread lightly, cautiously and slowly,” says Robin Blencoe, the NDP government minister responsible for gaming. Even pricklier are allegations of conflict of interest: the B.C. government owns 16.5 per cent of VLC. The government says it is selling off its stake in the company.

But it stands to gain, anyway. VLC estimates that the Seaport Centre would create 11,000 jobs and contribute $256 million in taxes to three levels of government. Still, some Vancouverites contend that the city’s west coast image would be tarnished by gambling—and by a flashy casino in particular. “People are concerned the project will look like Las Vegas north,” concedes the Port Corp.’s Longstaffe. “But the architecture won’t be Las Vegas glitz.” Another argument comes from people living near the proposed complex in the impoverished Downtown Eastside, who fear rising property values will drive them out. “Most people here live in sleazy little hotel rooms,” says Barb Daniel, executive director of the local residents association. “It’s not great, but it beats the street.” Residents can hang on to those rooms for now: a provincial review of gaming policy is not due out until the fall. There will be plenty of public consultation, minister Blencoe vowed last week. Similar consultations failed to halt gambling in Nova Scotia. Then again, British Columbia’s flush economy gives it a greater luxury to choose. 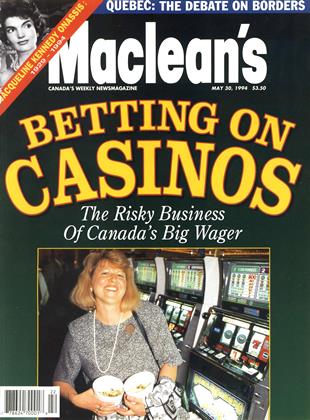