A shocking fact has surfaced on the road to the New Economy. After more than a century of adversarial relations and clenched confrontation, it now turns out that labor unions and corporate management actually have a great deal in common. Marx would shudder and shake his head at such a radical notion. Lenin would likely launch into a tirade about running dogs, imperialists and other enemies of the proletariat. Mao might dispatch the Red Guards to “re-educate” the misinformed. But while it may deflate the dialectic and diminish the drama, severe economic circumstances have proven beyond a shadow of a doubt that workers and their “oppressors” are actually on the same team.

During the recession, it became clear that management/labor conflict is a luxury. The name of the game was simple survival and in pursuit of that mutual self-interest, both sides had to bend or break. The traditional parent/child dynamic was transformed into a new relationship between consenting adults. In order to preserve jobs, unionized workers understood that they had to accept massive layoffs, wage rollbacks and the capital budget cuts that compelled them to do more with less. But their bosses faced the same challenges: middle and senior managers were just as likely to be laid off and stressed-out as their union counterparts.

Calgary-based Canadian Airlines International Ltd. took it even further. There, she separate unions grudgingly overcame their deep mistrust of one another and joined forces to trade critical wage and benefit concessions for a voice on the faltering company’s board of directors. As Canadian struggled to stay aloft, the employees pulled together and proudly played a key role in saving the airline—and most of their own jobs—with a critical infusion of cash.

So, now what? As the New Economy rises from the rubble of the recession and a restructured corporate sector emerges, the need for unions and companies to build and to broaden such newly forged relationships

is imperative. For Canadian business to compete effectively in an era of global Darwinism, it must have a workforce that is—wait for it—flexible, responsive and competitive.

That means that reality now excludes any expectation of lifelong employment at the same company, automatically followed by retirement with a full pension and a gold watch. No one can turn to their employers for job security or for their long-term welfare any longer. And rather than seeking refuge in a collective that shelters the weak and the unproductive, workers must be individually accountable for adding value and ensuring that they remain employable. In exchange, they will have a guaranteed place at the table because corporate managers depend more than ever upon their contribution to succeed.

There are, however, a couple of catches to this scenario. The first catch is that the corporate needs in the New Economy are a direct threat to the dogma of entrenched union organizations. Over several decades, labor leaders have sought to narrowly define workers’ functions, to block demands that extend beyond that prescribed scope, to establish hard and fast rules about who can do what when and under what conditions. And with such a mind-set, qualities like flexibility and responsiveness are out of the question. The second catch is human nature. Having made significant sacrifices throughout the recession, many workers expect some material payback from their employers now that the crisis is over and recovery is on the rails.

That brings us back to Canadian Airlines. While the threat of imminent bankruptcy has now passed, the danger is no longer from rival carrier Air Canada, or strident creditors: it is from the very employees who bailed out the company just two years ago. Last week, pilots at Canadian Regional Airlines, a wholly owned subsidiary of Canadian, voted 95 per cent in favor of a strike this summer. A spokesman for the Canadian Airline Pilots Association said it all when he declared that his members have “paid their dues” and now deserve a salary increase. Score one for Marx and Mao. For now. 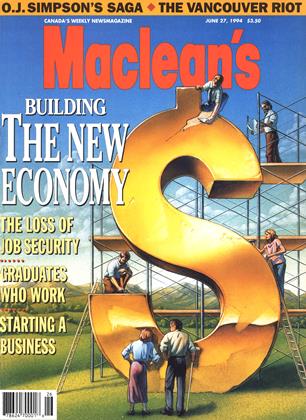