Somewhere inside the nucleus of a cell within a woman’s breast, a potential disaster has occurred. Some malign force—it could have been a chemical or a jolt of radiation—has damaged one of the thousands of genes that govern the human body’s growth and development. Normally, mechanisms inside the cell swing into operation to repair such damage. But sometimes—particularly if the damage is inflicted repeatedly—they are unable to do so, and a mutation results. The altered gene causes the breast cell to behave abnormally. Receptor proteins that are part of the cell’s communication system may begin to misread signals, causing the cell to proliferate uncontrollably. Usually, the process is slow—years after the event, a lump of aberrant cells forms inside the breast. Some cells may venture as far as the nearby lymph nodes and from there escape to other parts of the woman’s body. Now, cancer is on the loose____

Over the past two decades, cancer research has led to a vastly widened understanding of how the disease unfolds. Yet breast cancer, and other forms of the disease, claim more and more victims every year. Pressured by women’s organizations, Canadian governments and other sources are now pumping about $15 million annually into the study of breast cancer, up from about $5 million in 1989. Scores of researchers are pursuing a dizzying array of inquiries. In Toronto, Dr. Norman Boyd, director of preventive oncology at the Ontario Cancer Treatment and Research Foundation, is overseeing a 10-year project that will eventually involve 7,000 Canadian women in a study designed to test the widespread suspicion that a low-fat diet protects women from breast cancer.

At Quebec City’s Laval University, Dr. Eric Dewailly, a specialist in environmental medicine, will launch a study in September to test another widely held suspicion: that a group of chemicals called organochlorines, including such banned or restricted substances as DDT and PCBs, may play a role in breast cancer. In Dewailly’s study, 300 women with breast cancer will be examined to determine their exposure to organochlorines; another 300 women without breast cancer will be studied as a control group.

Meanwhile, in laboratories across the country, other scientists are focusing on minute mechanisms within women’s bodies

in an effort to determine how breast cancer begins and how it can be stopped. Among the laboratory studies currently under way:

Dr. Steven Narod is in hot pursuit of BRCAl, a gene suspected of causing between 2 and 4 per cent of breast cancers and between 5 and 10 per cent of ovarian cancers. Narod, an intense, 39-year-old cancer geneticist who works in the research division of Montreal General Hospital, says that the search for the gene may be nearly over. “We’re very close now,” says Narod. “If the gene is not found this year, then it will be in 1995.”

Researchers have known for more than 30 years that breast and ovarian cancers can be inherited diseases. But it was not until 1990 that Mary-Claire King, a professor of genetics and epidemiology at the University of California at Berkeley, located the gene on the 17th chromosome—dramatically narrowing the search to one region of the genetic landscape. Now Narod’s group, which includes scientists at the University of Toronto and at Laval, as well as laboratories around the world, are hunting for BRCAl. Narod’s team—in which molecular biologist Patricia Tonin carries out intricate laboratory analyses—has already performed a key role in the search. Chromosome 17 contains more than 1,000 genes. But by studying 150 families in Canada and other countries with multiple cases of breast and ovarian cancer and identifying telltale markers, the Montreal researchers narrowed the hunt for BRCAl to a stretch of about 15 genes.

To determine which of those is BRCAl, the researchers are using complex laboratory techniques that allow them to determine the chemical structure of genes. Those genes can then be compared with known cancer-causing genes. As well, suspect genes from cancer victims can be studied in an effort to spot the mutation that has made the genes into potential killers. Finding the elusive BRCAl, says Narod, will not necessarily lead quickly to a cure for familial breast or ovarian cancer. But, he adds,

“I subscribe to the belief that the more we know about cancer, the better we will be able to treat it.”

ease. In about 30 to 45 per cent of postmenopausal women who have had breast cancer surgery, tamoxifen (sold under the commercial name of Nolvadex in Canada) can reduce the risk of recurrence by as much as 50 per cent. But its ability to protect women from a recurrence of breast cancer tends to wear off after several years of use. Leigh Murphy, a 43-year-old associate professor of biochemistry at the University of Manitoba in Winnipeg, wants to know why that happens. The growth of breast cancers, she explains, is fuelled by the hormone estrogen, which locks onto receptor proteins inside cancerous cells and commands them to divide. Tamoxifen blocks that process by getting to the receptors first—and preventing estrogen from making contact with the cells. But “cancers are unstable and undergo mutation,” says Murphy. “Suppose the estrogen receptor is mutated in such a way that it actually sees the tamoxifen as estrogen. Then the cancer would grow.”

Murphy thinks that this may be what happens. In examining genetic material taken from breast tumor cells, the Australian-born Murphy has found abnormalities that might produce just such a mutant estrogen receptor. The next stage, says Murphy, is to determine how often mutant receptors play a role in breast cancer, and in what types of tumors. If Murphy’s theory proves correct, the finding might help in the development of new anti-breast-cancer drugs. Murphy says it will take at least five years to find out exactly what role mutant estrogen receptors are actually playing. But it is worth the effort, she says, “because breast cancer is such a terrible disease.”

“My strategy,” says Dr. Michael Poliak, an oncologist and researcher at Montreal’s Jewish General Hospital, “is to try to develop nontoxic treatments for breast cancer that don’t kill cancer cells, but just sort of make them go to sleep.” Poliak points out that there are already some drugs, such as tamoxifen, that do that in a limited way. To find better ways of making cancer cells quiescent, Poliak is looking at a group of substances produced in women’s bodies that stimulate normal breast development and growth. ‘We look at the substances that are potent at doing this,” says Pollak, “and then you try to interfere with their action, hoping that that will slow the growth of malignant breast cells.”

One likely candidate is a body chemical called Insulin-like Growth Factor 1 (IGFl), which, at the onset of puberty, signals breast cells to begin dividing so that the breasts will grow. When breast cells become cancerous, the substance plays the same role in stimulating malignant growth. The body also manufactures substances known as binding proteins that regulate the activity of IGFl. In test-tube experi-

ments, says Poliak, one of these substances—IGF binding protein 3—has shown a significant ability to arrest the growth of breast cancer cells. Poliak is now trying to determine whether the binding protein can be synthesized and used as a drug to treat breast cancer. Another approach, says Poliak, would be to find a way of stimulating the production of the binding protein to counteract the action of IGFl and halt the growth of cancerous cells. Within the next five years, says Pollak, his team should be ready to test one of those approaches in patients. Adds Poliak: “It’s looking pretty good.”

Jack Gauldie, who heads the department of pathology at McMaster University in Hamilton, is trying to develop a vaccine that will stop some kinds of breast cancer in their tracks. It should be possible to do that, he says, by activating the body’s own immune system to attack and kill breast cancer cells. That principle was applied by doctors at the U.S. National Cancer Institute in Bethesda, Md., who used the drug Interleukin-2 early last year to treat then Quebec premier Robert Bourassa for skin cancer—so far successfully. Gauldie, 51, has already treated breast cancers in mice. “In some of our experiments,” says Gauldie, “we have been able to make breast cancers in mice stop growing and go away.”

The central players in Gauldie’s approach are a group of cells called Tumor Infiltrating Lymphocytes (TILs), which are part of the body’s immune system. In a test tube, TILs can kill tumors. But in real life, the lymphocytes find their way into tumors—and then, for some reason, fail to attack cancer cells. Work in other laboratories has shown that when researchers insert a gene that produces a regulatory molecule called a cytokine, of which Interleukin-2 is one synthetic form, into the cell, the reluctant lymphocytes can be activated to attack cancer cells.

One problem was how to get the cytokine into cancer cells. Frank Graham, a McMaster researcher, did that by modifying an adenovirus—a bug that causes common colds—to remove the virus’s damaging powers and turn it into a vehicle for carrying the genetic information that produces the cytokine. Meanwhile, molecular biologist Bill Muller bred genetically altered mice that develop breast cancers similar to human ones. Now, Muller and his team are experimenting with various cytokines to see which is most effective in activating the immune system against breast cancer cells in the mutant mice. Gauldie hopes his team will be ready to test the vaccine approach on human subjects within a year. The goal, says Gauldie, “is to have the body’s immune response recognize tumor cells as foreign and wipe them out.” □ 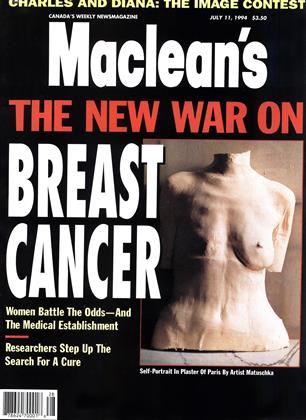