A few hours before the official start this week of the XV Commonwealth Games in Victoria, an unusual scene will be played out in the city’s small, doglegged harbor. At around mid-morning on Thursday, Aug. 18, a slender canoe, its high prow painted in red and black, its crew garbed in wool adorned with bone and feathers, will slip into the protected waters. The vessel will be followed by more than 30 others like it: traditional war canoes cut from single trunks of massive red cedar trees. Greeting the flotilla from a bare, rocky point will be a small delegation of important people. The chief of the Salish Indians, in whose territory the point lies, will be one. But with him will be another man, a slight, balding fellow of 30, with fair hair and the strange inflections and pale skin of a distant island. His Royal Highness Prince Edward, president of the Commonwealth Games and seventh in line to a throne whose power once bestrode the globe, may or may not appreciate the ironies of the moment.

The occasion has as much to say about the changes that have swept the globe over the past two centuries as it does about the roots of the Commonwealth Games in the now vanished British Empire. The tableau on the Victoria waterfront this week has been witnessed before: in 1792, all along the Pacific Northwest coast, the ancestors of these paddlers brought out their canoes to meet another pale man with strange accents, a captain in the service of Prince Edward’s ancestor, King George III. That captain gave his name—Vancouver—to the island where this week’s Games are being held. But if the empire that Vancouver helped to build has waned, the relationships it forged between some of the earth’s wealthiest and most powerful nations and some of its poorest and smallest ones have endured. And they are being celebrated this week, as athletes from tiny Norfolk Island (population 2,173) in the South Pacific greet competitors from giant India (population 846 million), from Canada, the United Kingdom and the rest of the Commonwealth, on the level playing field of sports.

Past editions of the Games have produced transcendent moments. One of the most rivetting took place 40 years ago this month in Vancouver, host of the 1954 Games. The sporting sensation of that year was Roger Bannister, a lanky British doctor who electrified the world that May when he ran a mile in 3:59.4, the first time anyone had done the distance in under four minutes. In Vancouver, his most dangerous opponent was an Australian farmer, John Landy. In blazing heat on Aug. 7, Bannister breasted the tape 0.8 seconds ahead of Landy, but the clock showed that both men had reached it in under four minutes. Delirious sports scribes called this dual accomplishment “The Miracle Mile.”

For today’s athletes, the competition may be stiffer at world championships in individual sports. But nothing better prepares them for the psychological onslaught of the Olympics than a chance to compete first at the Commonwealth Games. This is where the Alex Baumanns, the Mark McCoys and the Sylvie Frechettes of future Olympic gold perfect their moves. With multiple competition sites, a steady traffic in VIPs and international media, and a full program of splashy sideshows, the Games are among the very few that come close to rivalling the biggest show on earth.

The Games’ very size—and diversity—may be the main point of the exercise. In the words of one organizer, their most enduring benefit is to bring together “people whose gross domestic product is $356 a head and the richest nations on earth.” That was plainly the idea when the Games were first proposed, in 1891, by a British parson named Astley Cooper, as a festival “to draw closer the ties between the nations of the Empire.” The realization of that idea waited until 1930 when a Canadian, Bobbie Robinson, organized the first British Empire Games in Hamilton. Except for a 12-year interruption during the Second World War, they have continued every four years since.

At these Games, South Africa, freed of apartheid, will be welcomed back into the fold after a 33-year absence. But this will be the last appearance for athletes from Hong

Kong—by the time the next Games are held, in 1998, that territory will have reverted to China. Still, the inclusive impulse lives on: in Victoria it has found a contemporary reflection in the unprecedented participation of the physically disabled.

A similar impulse underlies the highly flexible sense of what constitutes a “nation” at the Games. Unlike the Olympics, which recognize only teams from independent states, the Commonwealth Games draw a distinction between a “country,” as in the United Kingdom, and “nation,” as in England, Scotland, Wales and Northern Ireland. There is no U.K. team competing; there are instead separate squads from each of its four constituent “nations.” And to answer the obvious question for Canadians, there seems, indeed, to be nothing to prevent Quebec as well, if it chose, from competing under its own flag at future editions of the Games—while still remaining part of Canada.

The past is especially difficult to avoid in Victoria, named, after all, for the Great White Queen herself. The landmark hotel that overlooks the harbor where the war canoes will congregate is called the Empress. “Royals” are everywhere, applied to roads, restaurants, subdivisions and the boxy, brownbrick theatre where the weightlifting competition will be held. The official language of the Games—notwithstanding $62 million of federal funding—is the Queen’s English.

At the same time, the associations that began even before Capt. George Vancouver sailed up this rugged coast continue to bind Canada to its cousins within the Commonwealth. It is neither accidental nor inconsequential that many of the immigrants to this country over the past four decades have come from former British colonies, from Jamaica, India and Hong Kong. “Ultimately,” argues Jacques Lemay, the Quebec-born director of the festivities that will open and close the XV Commonwealth Games, “we are all related.”

History does not really repeat itself. The scene may resonate with echoes of the past, but this week’s encounter between Edward and the Indian war canoes speaks more strongly to a hope for the future: that national differences can be celebrated without losing sight of a common humanity. Whatever other judgments can be passed on the legacy of empire, that is surely a worthy reason to salute the Games that are about to begin in a spirit of competition, without conquest. □ 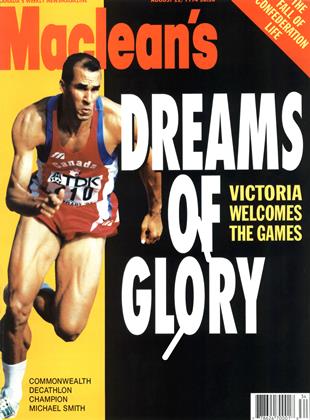