Back from the edge Anthony Wilson-Smith September 19 1994

Almost eight years after what he calls the “end of my nightmare,” Gilles Baril can recall exactly what he did that night and how he felt. Where he was and how he got there, however, is another story. At 5 a.m. on Nov. 13, 1986, he sat naked in a north-end Montreal hotel room, drunk and high after eight hours of drinking scotch and snorting cocaine, wondering what excuse he could give for not showing up in another hour to host his morning radio show. A strip dancer staying next door had just given him his last line of coke. He accepted that, but when she offered him herself, the then-30-year-old Baril was, he said, “too out of it” to comply. It was another too-typical night for the man who had

become, after the 1981 provincial election, the youngest member of the National Assembly. Then, he was known alternately as the “rock-androll politician” and the Parti Québécois’s “young wolf,” and regarded by political allies and foes alike as one of Quebec’s most promising and charismatic politicians. But on that night in 1986, he recalled later, “I felt like a trapped animal, alone in my lair.”

Early this week, Baril will mark what he proudly calls “a most important anniversary”: seven years and 10 months of sobriety. For a reformed substance abuser living one day at a time, a month of recovery is cause for celebration. But that Sept. 12 anniversary has other significance for Baril: he was hoping to celebrate—with friends and lots of soda

water—his return to the National Assembly as the Parti Québécois MNA for rural Berthier riding in the Quebec election. That would square the circle for a politician and reformed addict whose first snort of cocaine came on the night of his election victory in 1981. Since then, there has been his self-described “descent into hell,” and his incarnations— since he climbed back out—as best-selling author and host of several radio and television programs.

But most important, says Baril, is his emergence as role model to Quebec’s troubled youth through his work as director of one of the province’s most successful drug and alcohol rehabilitation centres. Baril has been the chief administrator at the privately run Pavilion du Nouveau Point de Vue in his riding for the past 4 */2 years: at any one time, it holds up to 45 patients who stay there for 28 days. For those who can pay, it is $2,500; similar rehabilitation programs in the United States can cost eight times that. But most of the underprivileged young who make up much of the centre’s clientele are admitted free. Ninety per cent of the annual $1.5-million budget is paid for by private donors, while the rest comes from the federal and provincial governments. Sadly, Baril says, there is always a waiting list.

If elected, Baril planned to continue working with I the centre on a volunteer í basis. Then, his present job I will almost certainly be g given, with Baril’s enthusi5 astic endorsement, to Yvon Picotte, a retiring provincial Fiberal cabinet minister from a neighboring riding who is a recently reformed alcoholic. Although Baril is a fervent sovereigntist, “there are,” he says, “no party distinctions when it comes to fighting addiction.”

Battling for causes—whether it is against addiction or for other principles—is something that comes naturally to the otherwiseamiable Baril. Quebec writer Pierre Migneault, who wrote the introduction to Barils book Tu ne sera plus jamais seul (You won’t be alone any more), called him a ‘Western Don Quixote” whose struggles “represent those of all of us.” The adopted son of a farmer in the tiny town of St-Eugene-deGuiges in northern Quebec, Baril became involved in politics in his mid-teens. His nomination by the PQ in 1981 in the riding of Rouyn/Noranda/Témiscamingue came about only because the original candidate became ill shortly before the election. Baril’s candidacy was opposed by PQ candidates from neighboring ridings because, they said, at 24 he was too young. In the subsequent election, he beat the favorite, colorful Liberal MNA Camil Samson, by 4,000 votes.

Around the legislature in Quebec City, it was sometimes difficult to tell who was more uncomfortable with each other—Baril, or his PQ caucus mates. He spent his first year in the National Assembly waiting, he said, for “someone to demonstrate that the PQ really was the party that cared about youth.” Other than then-minister Bernard Landry—one of the few people to encourage his initial candidacy—no one did.

Baril found his own ways of expressing his interests. He produced and starred on a rapstyle record called Rock ’ri Reve (Rock and Dreams), with several professional musicians and poet Raoul Duguay. Its lyrics included, memorably, an exhortation to “rock ’n’ dream of politics that will be/erotic, free and in

‘I have already won the most important victory of my life, by taking control of it’

music.” He gave the profits to various youth groups.

At the same time, Baril seemed intent on cramming almost all those objectives contained in the lyrics into his own life. He went through a string of girlfriends, travelled to California to meet with actress Jane Fonda and futurologist Marylin Ferguson, and founded a group called Conspirators of the Year 2000, aimed at charting an outline for Quebec society. He donated part of his salary to the group.

By the time of the 1985 election, Baril felt, he recalls, “very alone.” Increasingly, he turned to scotch and cocaine for solace. By then, the PQ was split between hardline sovereigntists and more moderate nationalists. When the election came, said Baril, “the PQ was lost. So, to a much greater extent, was I.”

He lost his seat. For Baril, the party was almost over, in every sense.

The riding of Berthier, where Baril makes his home, sits on the north side of the St. Lawrence River and begins about an hour’s drive from Montreal. The area’s income is

based primarily on farming, pulp and paper and striking scenery that makes it a tourist mecca for other Quebecers. A large number of full-time residents are elderly, retired exMontrealers. Most of the towns are small, and activities close down early.

It is a different choice of lifestyle for Baril, who says he used to “draw energy from the big-city lights.” But it is not as vivid a contrast, considering his past, as the position Baril occupies at the Pavillon du Nouveau Point de Vue. “Not so long ago,” says Baril, “it was more likely that I would be dead than working in a place like this.”

Redemption and recovery did not come easily or quickly. After his loss, Baril took his savings and severance pay of $40,000 and went on a six-month trip through South America. He has photographs of the places he saw, but no real memories: he spent almost all of the money on cocaine. He was freebasing by then—a process that amounts to smoking a highly processed, extra-potent form of cocaine. He was aware that he was out of control, but unwilling to confront that realization.

That did not come until that November night in 1986, when the drunk, stoned and scared Baril decided he had “hit bottom, and could go no further.” He phoned a friend, Sylvain Vaugeois, and said simply: “I need help.” Vaugeois phoned publishing magnate Pierre Péladeau of Quebecor Inc. and Péladeau, a reformed alcoholic, arranged Baril’s admission the same day to the Pavilion. That, said Baril, “was the beginning of my rebirth.”

He emerged 28 days later, clean, broke and jobless: he had been fired by the radio station. Only a few friends knew of his ordeal, although it was rumored in media circles. He kept a low profile over the next 2‘/2 years and ran for the PQ in the Montreal riding of Bourget in 1989. In a Liberal landslide, he lost by 165 votes. After the election, Baril, jobless but feeling increasingly upbeat, decided to tell his story on television to former PQ colleague Claude Charron, whose weekly program was one of the most popular in Quebec.

The response was enormous, and mostly sympathetic. As a result, Baril wrote his book about his experiences. It sold 25,000 copies, and Baril donated the proceeds to youth and anti-drug groups. The book, written in blunt and straightforward style, mixes his memories with advice on how to treat substance addiction. His notoriety led to offers to host Quebec-wide programs on radio and TV in which he continued on the same themes.

There were several notable exceptions to his popularity. His parents, hurt and confused, did not speak to him for almost a year. (Now, he says, “we are closer than ever.”) Within the PQ, the fallout was also unpleasant, and longer-lasting. After his revelations, he recalls, “Péquistes in my riding told me I should not have talked about my problems publicly, because it wasn’t proper.” Furious, he resigned from the local association, telling members in an angry letter that they were “refusing to look reality in the face.” At about the same time, he was offered the directorship of the rehabilitation centre, and moved to Lanoraie: one of the directors who recommended him was his

former roommate during his treatment.

Some of those objections surfaced again when Baril decided this year to run for the Berthier nomination. Once again, his friend, PQ vice-president Landry, was supportive,

though other senior PQ figures were not. Party Leader Jacques Parizeau, say some of Baril’s friends, was initially opposed, but changed his mind because of strong support for Baril among the party’s grassroots members.

the election campaign began, he spent up to 12 hours a day at the centre. Most of his free time comes on weekends when he sees his girlfriend, a television researcher in Montreal. Otherwise, he says, “I live as quietly as most people around here.” But Baril, a compact figure who resembles the actor Jean-Claude Van Damme, remains a rocker at heart. Alongside the stereo system that dominates his living room, there are compact discs by U2 and former Genesis lead singer Peter Gabriel. And one of his new pet projects is to stage a rock concert in support of Quebec independence. But he also now listens to more tranquil music, such as the brooding Celtic-based sounds of Loreena McKennitt. Baril says he discovered different kinds of music, and prayer, on the advice of Péladeau, who told him to “replace the spirit its”—meaning alcohol—“in your I life with spirituality.” Péladeau, in

an interview with Maclean’s last 5 week, recalled his experiences

1 with Baril. “Gilles was a young

him find himself, and help so many others, is an example we all can draw strength from.”

Perhaps more to the point, Baril remains a fighter who has learned through painful experience which battles count the most. “To win as a politician is important to me,” he said last week. “But I can never forget that, as a person, I have already won the most important victory of my life, by taking control of it.” □ 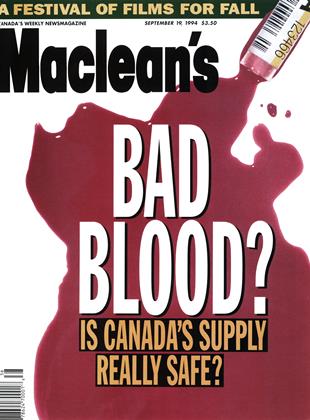