A CLASH OF WILLS

A CLASH OF WILLS

Maurizio Bevilacqua looked tired and admitted that he was anxious to see his children, aged 5 and 6, again. The Toronto-area Liberal MP had spent five weeks crossing the country with Parliament’s 15-member human resources development committee, which was holding public hearings on Lloyd Axworthy’s ambitious proposals to overhaul Canada’s social safety net. Protesters disrupted the hearings in several major cities, and special-interest groups generally opposed the government’s plans. But, as the committee completed its 22-city odyssey in Atlantic Canada before returning to Ottawa for two days of hearings last week, most of its members were convinced the process had been worthwhile, despite the burden on their personal lives. “There’s a consensus out there that Canadians want change,” said Bevilacqua.

The nine Liberals, three Reformers and three Bloc Québécois members on the committee received submissions from about 650 groups, representing, among others, labor, women, the unemployed, students and the poor. Over the next few weeks, the MPs will prepare a report to be tabled in the House of Commons on Feb. 6. Meanwhile, labor leaders and other activists, who contend that the government is more interested in cutting the federal deficit than reforming social programs, are planning campaigns to prevent the Liberals from reducing the $39 billion it spends annually on unemployment insurance (UI), postsecondary education and social assistance. But, according to opinion polls, the government launched its review with considerable public support for an overhaul of social programs. “What you are hearing before the committees is a group of people saying, ‘Don’t make changes,’ ” says Axworthy, who as minister of human resources development, launched the process. “There’s an incredible

contrast between their views and what socalled broad-based Canadians are saying.” Axworthy released his discussion paper on social-policy reform in early October. Without setting specific targets, he made it clear that cutting costs is at least partly behind the overhaul. “Until the fiscal situation of governments improves, there will be no new money for new programs, including social programs,” the Axworthy paper says. “And existing expenditures must be brought under control and in some instances reduced.” Ottawa has proposed, for example, converting $2.6 billion of the $8 billion that it transfers to the provinces

annually for postsecondary education into repayable student loans, paid directly to students. The government also set out several ideas for changing UI. Among them: extending the qualifying period to 14 weeks of work from the current 12; cutting benefits in some cases; and creating a two-tiered system in which frequent claimants would wait longer and receive smaller cheques than those who make one or two claims in a lifetime. Axworthy has studiously avoided putting a price tag on these changes. But in a pre-budget report to Finance Minister Paul Martin dated Dec. 5,

the social-policy review would save $3.4 billion over the next two years.

with minor or major problems that require change. Decima also reported that 80 per cent agreed with Axworthy’s proposal to create a two-tiered UI system, while fully 90 per cent supported the idea of “workfare”—doing work to qualify for benefits.

While the committee hearings represented the most high-profile round of consultations, the government has also tried other ways of hearing from the Canadian populace. Axworthy’s department distributed one million copies of a booklet titled Have Your Say, which gave people an opportunity to contribute their own ideas. By mid-December, some 20,000 copies had been returned. Another 7,000 people expressed their views electronically by sending messages to a ministerial mailbox on a computer network. As well, MPs from all parties held about 225 town-hall sessions on social-policy reform, attracting as many as 20,000 people in total.

Bevilacqua, who attended about 25 such meetings, said that business owners and other individuals repeatedly told MPs that the government should provide training for UI and welfare recipients to increase their job prospects. “You got people at the town halls who work hard, play by the rules and expect to be rewarded,” said Bevilacqua. ‘They really want change, much more so than the interest groups.”

But while the government quietly searched for public consensus, union members, students and social activists staged noisy protests across the country to express their outrage over the proposed changes. They disrupted the hearings in Vancouver, Regina, Toronto, Montreal and Halifax. Many of the incidents were apparently organized by a radical student group called International Socialists. The most sensational took place in Montreal, where demonstrators charged into the hearings room and knocked over tables and chairs, prompting most of the committee members to flee for cover.

Axworthy has personally been the target for much of the protesters’ wrath. On Nov. 16, an estimated 10,000 students held a noon-hour rally on Parliament Hill and hurled eggs and

The government has been closely monitoring public opinion on reforming the social-safety net And it has found that Canadians are remarkably receptive—at least in principle—to the need for change. An Angus Reid Group poll, conducted for the government in late June, showed that 78 per cent of respondents agreed that there is a need for reform. An independent poll done by Decima Research in early November found that 96 per cent of those questioned said that Canada’s social programs are plagued

other debris at the minister when he tried to address them. And on Dec. 17, about 35 student activists protested by eating Kraft Dinner, their symbol of student impoverishment, outside Axworthy’s Ottawa home, although the minister and his family were out at the time. Student organizers also distributed thousands of leaflets containing directions to the minister’s home, a gesture that had Axworthy—himself a former student activist— fuming publicly. “I find that objectionable,” he said. “It really makes you say, What’s going on in this country?’ ”

Axworthy’s consultation process has also drawn fire from the other end of the political spectrum. Reform party MPs serving on the human resources committee have been outspoken in their criticisms. They were particularly irked by the number of witnesses who attributed the government’s revenue problems to tax loopholes and expenditures that benefit large corporations and wealthy individuals. “No one has been able to provide us with the actual study that proves what they are saying,” said Reformer Diane Ablonczy. Another committee member, Saskatchewan Reform MP Garry Breitkreuz, was even more blunt. “The Liberals have created a monster,” he said. “The hearings have been taken over by special-interest groups demanding more, not less, spending. It will be very hard for the committee to come up with meaningful suggestions.”

Although labor organizations and other special-interest groups vow to continue their opposition, it is the provinces that could emerge as the most serious threats to the reforms. Alec Jasen, Axworthy’s communications adviser, said that Ottawa can unilaterally legislate changes to unemployment insurance because it is an exclusively federal program. However, the federal government funds postsecondary education and the Canada Assistance Plan, which provides welfare benefits to the poor and disabled, jointly with the provincial governments, and would, said Jasen, prefer to negotiate changes to those agreements with the affected governments.

But many Ottawa insiders expect that the Parti Québécois will reject any talks until after it has held its referendum on Quebec’s separation, now expected sometime in late June. They also say that the PQ and the Bloc Québécois will likely use Ottawa’s proposals as ammunition in its battle to convince Quebecers to vote for sovereignty. The government would prefer a June referendum rather than a fall vote because it plans to introduce social reform legislation, which will spell out in detail what changes Ottawa wants, during the autumn sitting of the House. Government officials concede that they may have to proceed with the reforms without Quebec, should the PQ refuse to participate even after the referendum.

The program reforms could also be hampered by a provincial election in Ontario, which is anticipated next spring. Ontario’s NDP government has complained bitterly about unilateral cuts in federal transfer payments. Some observers believe that provincial

politicians in Ontario could try to turn any further cuts into an election issue, particularly since Ottawa’s proposals have already created a chill in relations between Axworthy and Ontario Education Minister Dave Cooke. In early December, Cooke sent Axworthy a letter warning that a proposed change in funding for postsecondary education could cost Ontario $700 million in the 1996-1997 fiscal year. Axworthy, in turn, accused Cooke of resorting to “a big lie, to put it bluntly,” and called his letter one of the “most appalling and degrading pieces of political tactics I’ve seen in a long time.”

In fact, the federal proposals for funding postsecondary education have been the most contentious part of Axworthy’s green paper— perhaps because they were also the most specific. Ottawa’s $8-billion annual contribution represents about half the operating cost of the entire postsecondary education system. University and college administrators fear that converting almost a third of that into direct student loans would cost their institutions a stable and predictable source of financing.

Presidents of several educational institutions predict that the changes, if implemented, would result in a sharp rise in tuition fees and cut sharply into the funds available for research and development. The Ottawabased Association of Universities and Colleges of Canada has estimated that average university tuition fees would double to $5,000 per year. “Students will have to fund

not only their own higher education, but the research that would also suffer from Axworthy’s cuts,” David Strangway, president of the University of British Columbia, told Maclean’s. “It isn’t entirely fair to put a significant portion of the nation’s R and D costs on students.”

Others argue that higher fees and increased debt loads will make universities and colleges more inaccessible—and less universal. “Who is going to accept a debt load of $20,000 to $40,000 to learn to appreci-

'The hearings have been taken over by special interest groups’

ate poetry?” wonders William Eliot, president of the University of Prince Edward Island. “About the only people who can afford that kind of debt are doctors and, maybe some lawyers, who will be jumping into highearning positions.”

Women’s groups are also emerging as ardent opponents of Axworthy’s reforms. They are deeply concerned about proposed changes to the Canada Assistance Plan and UI. Sunera Thobani, president of the National

Action Committee on the Status of Women, criticizes one of the suggestions in Axworthy’s green paper that would base UI benefits on family rather than personal income. She says it could violate the Charter of Rights and Freedoms because, although employees pay UI premiums as individuals, they may not be entitled to claim benefits because of family income. She also maintains that, because unemployment is higher among certain types of female workers, a two-tiered UI program limiting frequent claimants to fewer benefits would hit women harder.

As the parliamentary hearings wound down, the interest groups geared up for the next phase of battle. Jean-Claude Parrot, executive vice-president of the Ottawa-based Canadian Labour Congress, said he expects Martin’s February budget will contain firm figures on the amounts of money to be withdrawn from postsecondary education and the Canada Assistance Plan. That, he added, will help galvanize the opposition to social-policy reform, and trigger even more rallies and protests. ‘We need to improve our social programs, not kill them,” Parrot said. “Let’s not pretend we’re being too generous.” In the weeks to come, that is a message that socialpolicy advocates intend to deliver to Ottawa, loud and clear.

D’ARCY JENISH with WARREN CARAGATA in Ottawa, VICTOR DWYER in Toronto and JOHN DeMONT and SUSANNE HILLER in Halifax 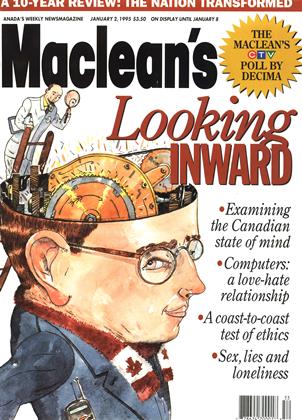