One official said he doubts the men can be punished

Even under the cover of rain-soaked darkness, it was obvious that this was no ordinary Friday night at Canadian Forces Base Petawawa. Normally, by 5 p.m., the first of the regulars from the Canadian Airborne Regiment would be launching the weekend with a beer and a game of pool at Sassy’s Bar and Grill, a Highway 17 haunt within sight of the sentry post at the base’s main entrance. But Sassy’s would wait. Instead, last week, an hour after the rest of the 4,200-member force stationed in the military town 130 km northwest of Ottawa had left work for the night, Canada’s elite force of 650 men was being chewed out by the army brass. Military spokesmen might have called it a “briefing,” or even a pep talk. But the grim faces under the maroon berets in the chastened caravan of men that streamed off the base at 5:15 p.m. suggested differently. “It’s hard to believe you’re the best,” grumbled one Airborne soldier, “when everybody thinks you are scum.”

If anything, the military community and the town that supports it are fed up—as fed up with the unwanted attention as they are with the antics of the small, troubleprone group within the Airborne that provoked it. Tension simmered in Petawawa throughout the yearlong, highly publicized trials arising out of the 1993 beating

death of a Somali teenager at the hands of Airborne soldiers. The release last week of video pictures showing the dark side of a supposedly highly trained unit unleashed outright hostility. The base was closed to all but authorized personnel, and soldiers were ordered not to speak to the media. Shoppers at the base CANEX store shrugged their shoulders at inquiries. “As disgusting and juvenile as those hazing videos are,” said one military wife, “what do people expect? We don’t train those

guys for the foreign service.”

The talk was not unlike trench warfare. “There’s a fear that the reporters would ambush the spouses,” said Capt. Rob McGowan, spokesman for the base. At the local McDonald’s restaurant and other businesses, journalists were shooed off the premises. At Sassy’s, where Airborne T-shirts are draped over the bar, the reaction was the same. “The Airborne are our friends. You’re not,” manager Paul Roop told a reporter. “We don’t want anyone harassing them. We like to protect them.”

The siege mentality was perhaps predictable. CFB Petawawa, which along with spouses and civilian employees has a population of 10,000, is the lifeblood of the town of Petawawa, with a civilian population of 5,200. In fact, it is the reason for the town’s existence. From the oversized K-Mart to the Wild West Tack ’n’ Boots specialty store on Highway 17 that sells cowboy boots and Australian outback coats, the army is catered to and coddled, from Petawawa to nearby Pembroke. No one believes warnings that the regiment-amounting to one-seventh of the army’s infantry troops—might be disbanded. But the idea provokes uneasy thoughts. “News reports make it look like the whole regiment has gone haywire,” said Edward Chow, a pharmacist and Petawawa reeve. “We certainly can’t afford to lose them. If someone determines that the Airborne is rotten to the core, which we all know is untrue, this town will have to suffer a black eye for having housed them.”

But the staunchest defenders welcomed an inquiry—and an end to the Airborne’s woes. An editorial in the Pembroke Observer condemned the actions of “a small segment” that had tarnished an entire regiment. At the same time, the newspaper urged the military establishment to abandon its tradition of secrecy. “The videos and torture death themselves are sensational and raise real concerns about the conduct of the Airborne Regiment,” said the editorial. “But the military can only regain the confidence of Canadians if they resolve their problems in public.” Added Chow: “We all have to look at ourselves in the mirror”—even if that reflection is not what most want to see. 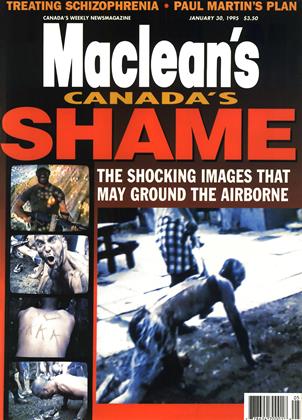