Nothing, it is becoming clear, will ever be able to take away the pain. In an extraordinary television interview last week, the parents of murdered teenagers Leslie Mahaffy and Kristen French spoke candidly, bravely, and with great emotion about the anguish that has marked their lives since their daughters were raped, tortured and killed by Paul Bernardo in St. Catharines, Ont., in 1991 and 1992. At times struggling to retain their composure while speaking on the CBC’s National Magazine, the four—Donna and Doug French, together with Deborah and Dan Mahaffy—addressed many issues, from the controversial plea bargain obtained by Karla Homolka, Bernardo’s former wife, to the way graphic videotapes of their daughters’ torment were used in evidence. But through it all, there was no escape from the palpable, wrenching agony that is every parent’s worst nightmare. “It’s a horrible, aching thought that never again will we ever feel perfectly happy,” said Donna French. “It just won’t happen because a very big part of our lives is missing and we can’t get it back.”

It was the first time that the families have spoken publicly since Bernardo was convicted of first-degree murder on Sept. 1 after a sensational four-month trial in Toronto. The timing of the Oct. 5 interview, which was followed by a similar appearance the next morning on CTV’s Canada AM, appeared to be carefiilly chosen: on Oct. 6, the Bernardo case was again in the spotlight as Crown attorneys argued in a St. Catharines courtroom that Bernardo, who has already been sentenced to life in prison with no chance of

parole for 25 years, should be declared a dangerous offender and jailed indefinitely. Assistant Crown attorney Lesley Baldwin told Maclean’s that, while such applications are unusual, the evidence for the designation in Bernardo’s case is very strong. “We believe he is one of the most dangerous criminals in Canadian history,” Baldwin said. She also noted that such a finding would nullify the need to try Bernardo on 33 other outstanding charges, including 14 rapes in the Toronto suburb of Scarborough, two other rapes in the Niagara region and the death of Homolka’s sister, Tammy.

Bernardo’s lawyers, John Rosen and Anthony Bryant, both of Toronto, countered that their client has already been adequately sentenced for his crimes and that no further punishment should be meted out against him.

But in a bizarre twist Rosen also received the court’s permission to withdraw from the case. A highly regarded criminal lawyer whose deft cross-examination during the trial has been widely credited with calling much of Homolka’s testimony into question, Rosen said that a dangerous offender application is a complex matter that is likely to go on for weeks and require many hours of preparation. Rosen explained to Justice Patrick LeSage that he wanted out because the Ontario government will not undertake to pay all his legal bills. LeSage agreed, but reserved judgment on whether the prosecution’s dan-

The parents speak out about losing their daughters

gerous-offender application should go ahead.

As the issue of further proceedings in the case comes to the fore, Toronto lawyer Tim Danson spoke up for the victims’ families’ rights. In addition to general changes to the law that would bolster the rights of crime victims and their relatives, the Frenches and Mahaffys have one overwhelming need, he said. “They will have no sense of closure,” said Danson, “until they know that no one will ever have access to those tapes again, and that, once the legal proceedings are over, the court will order that the tapes be destroyed.” The issue remains a highly charged one, even though the murder trial has ended. The tapes, made by Bernardo and Homolka, contain horrific images of the two girls’ final, tormented hours. During the trial, while the jury viewed the tapes repeatedly, spectators in the court were allowed only to hear them but not see their graphic scenes of torture. But both families objected strongly to that compromise, arguing that only the judge, the jury and counsel should be able to see or hear the tapes. If Bernardo seeks parole after serving 25 years, there is a chance that the tapes could be used in evidence again. And if he is found to be a dangerous offender, he would be entitled to periodic reviews of his status, which could call for more viewings of the tapes.

Meanwhile, other issues stemming from the sensational case remain to be resolved. Bernardo himself has filed an appeal of his murder conviction based on claims that the trial judge made errors in law. At the same time, many Ontarians are lobbying the government of Premier Mike Harris for an official inquiry into the Homolka plea bargain. Before the existence of the tapes was revealed, she brokered a deal under which she received a sentence of only 12 years for manslaughter, in exchange for agreeing to testify against her ex-husband. Critics say that the tapes have subsequently shown that her involvement warrants a much tougher sentence. Last week, a group of women from Hamilton and St. Catharines delivered a petition containing more than 300,000 names to the Ontario legislature, asking for a review. For the Mahaffy and French families, as for many other Canadians, a full resolution of this most horrifying of cases can hardly come soon enough. 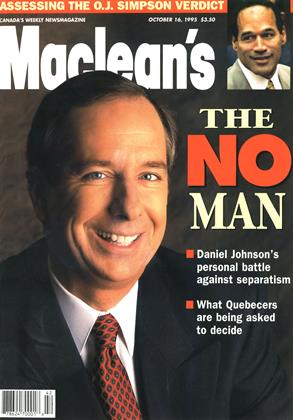