Shelve all of those conflicting economic studies. Ditch the latest “blueprint” for an independent society in Quebec. According to a growing number of American financial an-

alysts, it’s high time that Canadians came to their senses and recognized that the separation of Quebec is merely a sound business proposition. If we didn’t have such vigilant neighbors to the south, we might have completely overlooked such a golden opportunity to profit from the demise of our own country.

It’s neighbors like Dennis Gartman who aspire to save Canadians from such shortsighted folly. Gartman, the publish-

er of a daily bulletin on global capital markets, is probably the only ardent Quebec separatist living in Suffolk, Va. But at a time when many Canadians despair about the future of their country, he is positively chirpy about the economic prospects for both sides—if Canada and Quebec would only agree to go their own ways.

While Gartman says that he understands all the “wailing and gnashing of teeth” over the fate of Quebec, he is still convinced that it will be the “the best of all possible worlds” if Quebec strikes out on its own. It would bring Canada’s chronic political instability to an end. And the remnants of

Confederation would be stronger if Quebec and its transfer payments were off the books, he argues.

In Gartman’s view, a fiscally unfettered Canada would suddenly be able to profit from the aggressive debt-reduction strategies implemented by Ottawa and the provinces. And he doesn’t seem to be much troubled by the risk that even a temporary bout of separation anxiety in the financial markets might derail the carefully calculated program of cuts he applauds so heartily. Nor does Gartman factor in the possibility that, even if Quebec secedes, the rest of Canada may still be held legally liable for its share of the national debt.

As for Quebec, Gartman reasons that there is plenty of historical evidence to

support his view that when apron strings— as well as purse strings—are cut, people tend to find their feet rather smartly. He predicts that if Quebecers vote for sovereignty on Oct. 30, they

on will be swept up in a wave of national pride—which, in turn, will greatly enhance their productivity and their drive for economic self-sufficiency.

If Gartman’s bullish stance is not convincing enough, other American pundits have volunteered their own endorsements of an independent Quebec. Last week, a group of four independent U.S. financial analysts released a report declaring that separation would have a “neu-

Quebec has accumulated about $65 billion of its own debt and there is a good chance that it would have to assume as much as $150 billion of Canada’s national debt as well. Nevertheless, the report seems to assume that international capital markets will take that in stride. It stated that “a good part of the anguish of the financial sectors is caused by emotional rhetoric rather than serious economic analysis.” Predictably, within hours of its release in New York, Quebec’s senior sovereigntists publicly embraced the study. Deputy premier

The catch is that, regardless of what investors and theorists choose to believe, financial markets are hotbeds of overwrought emotion—as much if not more so than any legislative assembly. And because of advanced technology, those emotions scud across computer screens around the clock, reflecting every mood swing and every rumor in each currency trade.

In fact, there would be precious little market activity if fear and greed were ever factored out of the equation. The great shame is that Canada keeps giving capital markets—and our neighbors—so much opportunity to play their games on our turf. 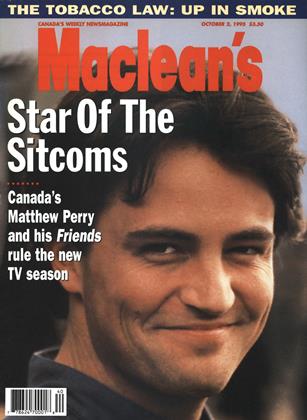