If Prime Minister Jean Chrétien were not so happy being a politician, he might well have been suspected of coveting a new career as a talk-show host.

Standing in front of a group of about 200 business leaders last Saturday, and backed by almost all of Canada’s provincial and territorial leaders, Chrétien brandished a cordless microphone and a collection of one-liners with cheerful aplomb. The country’s premiers, he said, have all the components of a good hockey team: Ontario’s budget-cutting new premier, Mike Harris, could be the right-winger, he suggested; New Brunswick’s Frank McKenna would play centre; and Saskatchewan’s Roy Romanow, a social-democrat who has balanced his province’s budget, “is a left-winger who uses a right-winger’s stick.”

But when it comes to stickhandling around tough political issues, few leaders are as deft as Chrétien. He demonstrated that on the weekend, sailing almost trouble-free through a controversial meeting with China’s premier, Li Peng, that took place in Montreal amidst the hothouse atmosphere of the Quebec referendum. With all of Canada’s provincial premiers present except Quebec’s Jacques Parizeau, Ottawa announced the signing of new contracts worth more than $650 million for Canadian firms doing business in China. That figure was relatively small when compared with the estimated $9 billion in deals signed last November when Chrétien and the premiers— again, without Parizeau—visited China, but it was, nonetheless, said the prime minister, “a pretty good piece of business.”

Just as importantly on the political front, Chrétien and the premiers avoided potential minefields in several areas. China’s dismal record on human rights—and Canada’s often uneven response to it—means that any meeting between leaders of the two countries features an almost painfully delicate balancing act on the part of Canadian politicians. Once again, as he did last year in China, Chrétien made only a veiled reference to those human-rights problems, concentrating instead on the notion that China’s record is more likely to improve through co-operation with the West rather than by isolating it.

Privately, federal officials conceded that by setting the gathering in Montreal less than three weeks before the Oct. 30 referendum vote, they were hoping to highlight the economic advantages of federalism, and the notion that a separate Quebec would lose access to the rich Asian-Pacific market. Although Chrétien did not refer directly to the issue in a Friday night speech, it was filled with pointed references to “unity,” “co-operation” and “stability.”

But some No-side strategists also worried that their plan

could backfire if China’s humanrights record became an issue, or if any of the premiers made too aggressive a statement about the consequences of sovereignty. “We know that people like Romanow, [Newfoundland’s Clyde] Wells, and [Manitoba’s Gary] Filmon are just itching to get into the fight,” said one senior No-side official. “The point is to make them realize that fighting words aren’t necessarily helpful words.” As a result, No-side advisers spoke regularly to the premiers in the week prior to their visit—and silence largely prevailed.

Another worry was that the meeting brought out two former prime ministers, Brian Mulroney and Pierre Trudeau, who dislike each other almost as much as sovereigntists dislike them. As well, there is little enthusiasm among many No strategists for either man entering the campaign, because of the concern that it will remind Quebecers of failed past constitutional initiatives. And even more worrisome was the prospect of an unseemly spat between two former prime ministers who maintain sharp differences in their approach to Quebec nationalism.

Nonetheless, Mulroney entered the fray last week, with pro-federalist remarks made at a conference of former world leaders in Colorado followed by an essay he wrote for The New York Times. Then, in his role as a member of the Montreal international law firm Osier Renault, he attended a reception at the conference for Canadian and Chinese businessmen. Following that, he publicly predicted a No win. Visibly stung by remarks from his onetime friend Lucien Bouchard, who suggested Mulroney went to the United States because he lacked the courage to speak up at home, Mulroney joked that he had done so in order to ensure that Bouchard’s California in-laws were kept informed on the issue.

Trudeau, for his part, remained resolutely silent, despite a starring role in the meeting. The two-day conference was organized by the Canada-China Business Council to mark the 25th anniversary of Trudeau’s decision to formalize diplomatic relations with Communist China. As a result, Trudeau, who turns 76 on Oct. 18, made a rare public appearance to be honored for his efforts. Looking tired and wearing a threadbare beige suit, he resisted repeated efforts by the media to comment on the referendum, brushing away queries with a characteristic slight flick of his hand.

That silence allowed Chrétien and the premiers to stay with their statesmanlike tone. The meeting, said the prime minister, was “extremely useful for business, and therefore for all of Canada.” He took one mild dig at Parizeau for his absence, remarking that “he should have been here, but I told Premier Li that the people of Quebec are very eager to do business with China.” Parizeau’s absence raised another obvious question: the next time Chrétien invites leaders of all the provinces to a meeting, will Quebec still be among them? 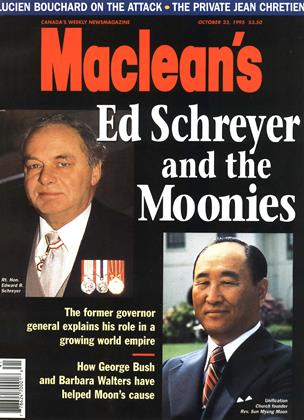